Home » TV and Movies » 'Thor: Love and Thunder': Taika Waititi Hints at Space Sharks From the Comics and Fans Love It

Marvel fans were in for quite a treat when Taika Waititi hosted an online watch party for Thor: Ragnarok and did live commentary. His social media accounts are entertaining enough on their own, but the event yielded some gems about the upcoming Thor: Love and Thunder film.

Waititi gleefully shared some tiny tidbits about the Phase 4 movie, and now he’s made fans all excited about Space Sharks. For the non-Marvel experts in the building, who are they? 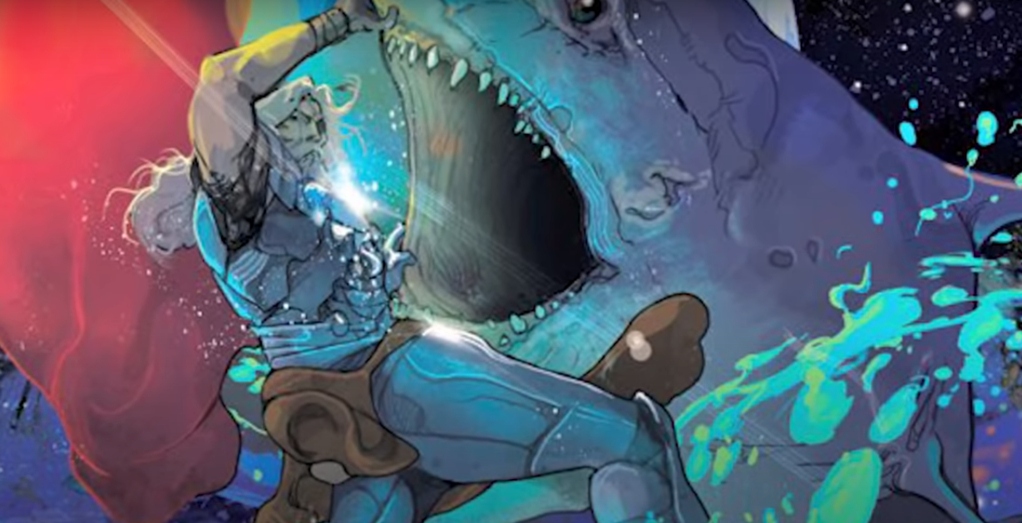 Who are the Space Sharks or ‘Starsharks’?

Mine through Marvel’s comic book vaults and you’ll discovera race of beings called Starsharks, who are also referred to as Space Sharks.Sound fun? They’re alien creatures who look like regular sharks, with faces andbodies that resemble Great White sharks or Hammerheads.

Though they mostly inhabit the Pegasus solar system, they’ve been known to travel and have the ability to fly. Sadly, in the comics, the Space Sharks are largely relegated to fringe positions in stories.

At times, they’ve fallen prey to the Brood, the evil parasitic alien race that infiltrates the minds and bodies of their hosts.

Under control of the Brood, Starsharks turn into weapons ofdestruction, outfitted with technology and/or manipulated and controlled by thespecies. Starsharks are also bred with Acanti by Chitauri into hybrids calledLeviathans. The Chitauri is one of the races led by Thanos.

But that doesn’t mean Space Sharks aren’t formidable intheir own right. They can fight and have devoured other aliens and old, deadgods. One of the most important things from the comics is that they hang aroundGorr.

Thor is no stranger to Space Sharks

Named Thor’s deadliest foe, Gorr the God Butcher inhabits his own world where Starsharks help clean up the mess.

They show up in Gorr’s quest to kill Thor (although that’s happened multiple times), but since they live in the Earth 616 universe where Avenger Thor is located, it’s this version of Thor that many believe will make it into Thor: Love and Thunder. The Asgardian has even ridden on one.

Gorr’s reputation lives up to the hype. He kills old and newgods, and travels through time to do so, even going so far as to kill a babygod and tormenting King Thor of the future. With so many gods and demigods leftfor dead, the Starsharks do their part in ingesting them.

But it’s believed they’ll play a large role in the new Thortale, especially if Gorr is involved.

Waititi is game to throw Starsharks into the ‘Thor: Love andThunder’ story

During his live Ragnarok broadcast, Waititi shared some concept art and commentary for the new film.

According to The Hollywood Reporter, the writer-director-actor said that this installment is way bigger than previous Thor movies, and it’s as if a 10-year-old asked for a list of things to be thrown in and he said yes to it all. Space Sharks are included on that magical Marvel list.

Because Space Sharks are an alien race and Thor’s encounteredthem in his travels, expect to see all versions of the hero (Chris Hemsworthand Natalie Portman) bump into them in Thor: Love and Thunder.