Home » TV and Movies » This Morning thrown into chaos as Alison Hammond storms off set: ‘What is happening?’

Alison Hammond discussed her time trying to find love on Channel 4’s Celebs Go Dating with Phillip Schofield and Holly Willoughby. The This Morning star spoke about the ups and downs she experienced on the show and teased her co-hosts on whether she had been successful in her search for a boyfriend. However, when Phillip and Holly prepared to move the show onto the next segment, Alison caused chaos when she walked across the set to speak to Rylan Clark-Neal and John Torode.

After her interview was finished, Alison listened to messages from This Morning viewers being read out by Philip and Holly.

Alison had been discussing her quest to find a boyfriend before listening to a host of lovely messages from fans who wished the star luck on her venture.

Then, instead of simply leaving the set, as the interviewer wandered around the set saying goodbye to everyone.

First, she went over to the next guest of the day Rylan Clark-Neal as Phillip commented: “It’s like you’re just around our house.”

Read more: Phillip Schofield reveals whether he ever ‘rows’ with Holly Willoughby 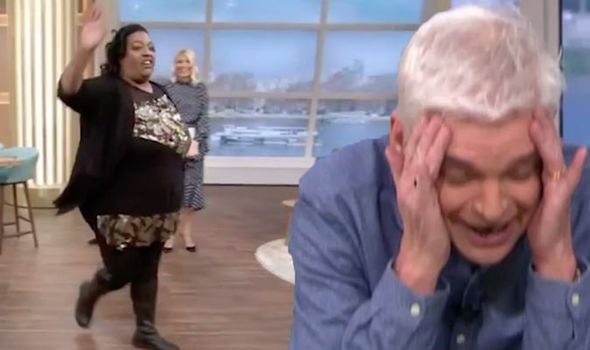 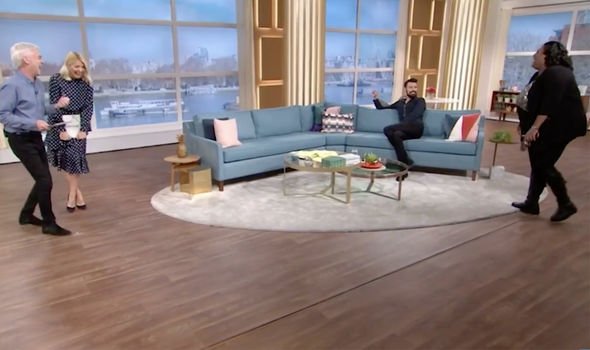 “Can I just say I hope you end up single with a load of cats,” Rylan joked.

“I’m going to find someone and I’m going to invite you over for dinner,” Alison hit back as she continued to wander round the set.

“See you later guys,” she remarked before spotting John Torode in the kitchen: “You all right, John?”

Walking over to embrace the chef, Alison said: “I haven’t seen you in ages, good to see you.” 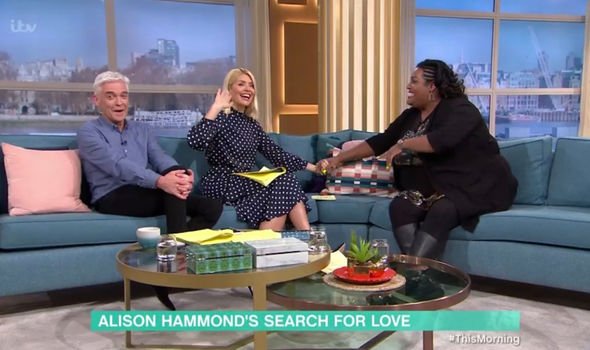 “See you later, I’m going now, I’ve got things to do,” she remarked.

Rylan then picked up a plate of small plants from the table over at the sofas and handed them to Alison.

“Take them darling, they’ll look nice in your bedroom,” he joked.

While the set descended into chaos, Holly cried out: “What is happening?”

“@thismorning I absolutely love @AlisonHammond I’m not sure there is a man worthy of such a legend. Need her to find her someone special cos she deserves to have all the love and happiness she gives to so many,” a second wrote.

“@AlisonHammond on this morning was the BEST bit of tv EVER! Walking around the set saying bye to everyone!!!!! Trying to find WiFi!!!!! The whole thing = TV GOLD! I [love] you !!!!!! #brummieforever,” someone else shared.

Another said: “@AlisonHammond oh to funny!! @Schofe is right it’s like being at your house lol. Awe Alison is amazing and definitely deserves the very best! Such a beautiful genuine woman.. Any man would be lucky to have you xx.”

Earlier in the show, Holly revealed that she filmed with Alison as part of Celebs Go Dating and they discussed how Alison was worried about kissing on camera.

“You’ve got to remember,” Alison explained. “I’ve got a 15-year-old son who is in school. I don’t want him to get teased.

“I can’t snog on camera… So a couple of times they would go in for the kiss and I would give them the neck and then it was all awkward, it was just embarrassing.”

This Morning airs weekdays on ITV at 10am.