Home » TV and Movies » 'The Parent Trap' Reunion: Lohan, Quaid, Others Look Back on Iconic Film 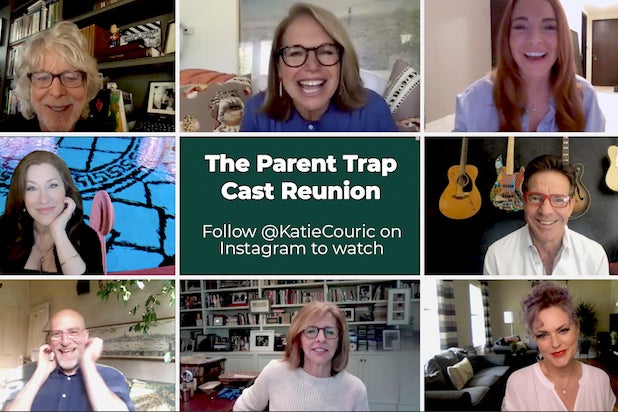 They actually did it! The cast of the 1998 Disney movie “The Parent Trap,” including Lindsay Lohan, Dennis Quaid and director and writer Nancy Meyers, reunited on Katie Couric’s Instagram channel to reminisce on their favorite moments making the beloved flick and the unexpected legacy it’s left more than 20 years later.

“We discovered a big star,” Meyers said of working with Lohan for what would be her breakout role.

While virtual reunions of classic films have been all the rage during the pandemic, this one came about as Couric interviewed Meyers on Instagram Live for her “Happy-ish Hour” series. The two were discussing “The Parent Trap” when Lohan unexpectedly chimed in with live comments, saying that “Nancy was a mother to me.”

The cast discussed the passing of Natasha Richardson, who played matriarch Elizabeth James in the comedy and passed away in 2009.

Meyers’ “The Parent Trap” follows Hallie Parker and Annie James, two identical twin girls (both played by Lohan) who were separated at birth and each raised by one parent in separate countries. When they unexpectedly meet at a summer camp, the two girls then agree to secretly switch places and then devise a plan to get their parents back together. The movie is an adaptation of a book by Erich Kästner and a remake of a 1961 Disney film also called “The Parent Trap.”

But it’s this 1998 version that has had a surprising and lasting impact.

“There’s a whole generation who think Meredith is #Goals,” Hendrix told Couric of her character.

Proceeds for the reunion go to World Central Kitchen, the charity founded by José Andrés in order to deliver fresh meals to communities in need. To make a donation, text “PARENT” to 80100 or go to www.wck.org/parenttrap.

Check out the video below:

After chatting with @nmeyers during an IG Live – we decided that we should try and see if we could pull off getting the Parent Trap gang back together again for the first time since 1998 — and guess what, we really did [email protected], @dennisquaid, @lisaannwalter, #SimonKunz, and @elaine4animals join writer-director @nmeyers and writer-producer #CharlesShyer to share their memories from filming, reenact their favorite scenes and discuss the film’s lasting impact. PS: With COVID-19 continuing to ravage the globe, we all decided to use this reunion as an opportunity to raise awareness and funds for @wckitchen – @chefjoseandres organization that is helping feed those in need all across the world. You can donate $10 by ???? texting PARENT to 80100 or by going to wck.org/parenttrap (link ???? in my bio!)❤️ #parenttrapreunion #wereallydidit