Home » The End Is Nigh! TV Enters the Final Days of Pre-Emmy Awards Season

It’s the middle of April and we’ve finally reached the end of the so-called winter TV awards season. On Thursday, April 22 the Film Independent Spirit Awards will honor its first ever batch of TV winners and simultaneously send the industry full-speed ahead into Emmy season.

Here’s what the TV awards landscape looks like currently and what to expect next week as the season draws to a close.

The Annie Awards are on deck, holding its ceremony Friday night with a wide swath of awards covering both film and TV. Though the animation awards can skew primarily toward children’s programming, there are several places where more adult-friendly shows break through, as with the general audience TV/Media category which saw the following series nominated: “Close Enough” (Episode: “Logan’s Run’d/Room Parents”), “Genndy Tartakovsky’s “Primal” (Episode: “Coven of the Damned”), “Harley Quinn” (Episode: “Something Borrowed, Something Green”), “Rick and Morty” (Episode: “The Vat of Acid”), and “The Midnight Gospel” (Episode: “Mouse of Silver”).

On Saturday, the ACE Eddie Awards will be held, honoring the editing in prestige projects across both film and TV. For television, keep your eyes peeled for shows that scored more than one nomination, particularly given that Eddie categories only have four slots. That means “What We Do in the Shadows” for commercial TV comedy and “Ted Lasso” in non-commercial TV comedy. Also, watch and see how that excruciatingly tough limited series or TV movie category shakes out, with limited series heavy “The Queen’s Gambit” facing off against “Mrs. America,” “Hamilton,” and “Watchmen.”

And on Sunday, look for the American Society of Cinematographers Awards, which will celebrate the best in their field for both TV and film. Because of a slightly ridiculous eligibility calendar, the ASC awards sees episodes from the first season of “The Mandalorian” going up against episodes from the second season of “The Mandalorian” which is wild no matter how you slice it. It’s also the only place you’re going to see Netflix’s “Lucifer” squaring off against the royal wedding episode of “The Crown,” while Freeform’s “Motherland: Fort Salem” and History’s “Project Blue Book” take on AMC’s “Better Call Saul.” When you think about it, this is just an entirely underrated awards event. 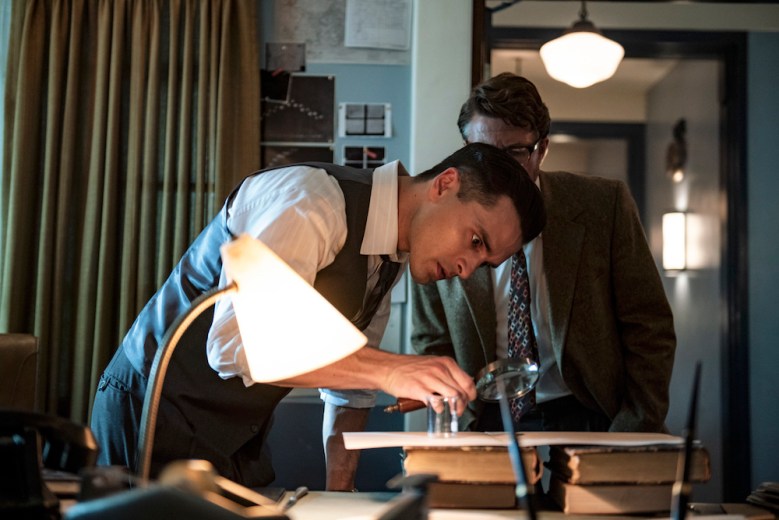 And what you might have missed in the past week:

Primed to celebrate the finest production design in movies, TV, commercials, music videos, and animated features, the Art Directors Guild Awards opted for bold choices when it came to its TV winners, laying the groundwork for Emmy crafts consideration for the series in question.

Positioned to get the biggest boost from the ADG Awards are Disney+’s “The Mandalorian” and Netflix’s “The Queen’s Gambit” which won their respective categories alongside Netflix’s “Ozark,” FX’s “What We Do in the Shadows,” and NBC’s “Will & Grace.” Of course, that boost comes primarily from the fact that the former shows are actually eligible for the upcoming Emmy Awards, which the latter shows are not, but the statement stands.

Not that “The Mandalorian” and “The Queen’s Gambit” were exactly hurting when it came to their Emmy prospects. For its first season, “The Mandalorian” won seven of the 15 Emmys it was nominated for, and there’s little reason to expect that will change for its second season, particularly given a potentially pandemic-weakened field.

And “The Queen’s Gambit” has somehow usurped “The Crown” as the overall, odds-on favorite in every eligible category, steamrolling competition in limited series competitions that on paper should be highly contested.

This year’s crop of winners, as chosen by the industry’s directors actually added a little spice to races that were starting to feel a bit run-of-the-mill. In Comedy Direction, it wasn’t Apple TV+ darling “Ted Lasso” taking home the trophy, but fellow frosh “The Flight Attendant” from HBO Max. In Drama, it was TV directing stalwart Lesli Linka Glatter who was celebrated for her direction of the series finale of Showtime’s “Homeland.”

And in limited series, “The Queen’s Gambit” won. See what I mean?

We talk a lot about the way in which the mid-year to mid-year Emmy calendar wreaks havoc on the momentum of other awards show and so it goes for the winners from this year’s CDGA Awards. Both the contemporary and the sci-fi/fantasy categories went to winners from last Emmy season in “Schitt’s Creek” (Pop TV) and “Westworld” (HBO), respectively. The prize for Excellence in Variety, Reality-Competition, Live Television went to Disney+’s “Hamilton” which is weird when you consider that it is really none of the things listed in the category’s name.

And in the Period Television category the winner was “The Queen’s Gambit.” Yes, really.

Speaking of the fractured Emmy schedule, the Artios Awards were not immune from looking backward instead of forward. In fact, all of its top TV categories went to shows that were already eligible for the 2020 Emmy Awards, including HBO’s “Succession,” “Bad Education,” and the first season of “Euphoria,” Hulu’s “Normal People” and “The Great,” and “What We Do in the Shadows.”