There have been a lot of big blowout royal weddings over the years, but none of them can hold a candle to Princess Diana and Prince Charles’s nuptials. I mean, this thing was watched globally by 750 million people—including 2 million fans who flooded the streets IRL. It was inarguably one of the most iconic events in royal history. So, uh, why wasn’t it featured in The Crown season 4?

To be fair, the show did bless us with a Princess Diana wedding dress moment, and the costume designers fully nailed recreating her silk taffeta Elizabeth and David Emanuel gown with its legendary 25-foot train. Plus, we got a look at Charles and Diana’s rehearsal! But still, The Crown’s ~wedding episode~ ended without an…actual wedding. And there’s a specific reason.

Confused? Angrily writing a petition to Netflix? Actress Emma Corrin (who plays Diana) explained the show’s logic to the Hollywood Reporter, pretty much saying that there was simply no point in recreating the wedding because literally everyone watched it already.

Josh O’Connor (aka Prince Charles ) also weighed in with his thoughts, saying that not showing the wedding allowed them to concentrate on what was going on behind the scenes:

And Also…It Wasn’t the *QUEEN’S* Wedding

There’s an even more relevant reason that Diana and Charles’s wedding wasn’t recreated in full. Everything about The Crown needs to relate back to the Queen because, ultimately, this show is not about Princess Diana. It’s about Elizabeth. Here’s what Emma told the Hollywood Reporter: 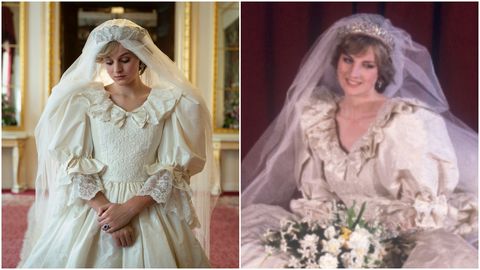 Fine, Then Why Include the Dress Moment?

The Crown’s director Benjamin Caron explained that the symbolism of the monarchy is fully wrapped up in that dress, which is why it made the cut. He told the Los Angeles Times the following:

Honestly, makes sense. I’m not mad, are you?