Netflix is taking the Tony Award–winning play The Boys in the Band from the stage to the screen.

Originally penned in 1968 by Mart Crowley, the production centers on a group of gay friends gathering in one pal’s New York City apartment for a joyous birthday party, which soon leads them to revisit their past loves and guarded secrets. The Boys in the Band premiered off-Broadway in ’68, and then arrived on the Great White Way 50 years later with director Joe Mantello (Wicked) at the helm and an all-star ensemble including Jim Parsons, Matt Bomer, and Zachary Quinto in the spotlight. In 2019, it took home the Tony for Best Revival of a Play.

On September 30, an on-screen adaptation of the celebrated work is headed to Netflix with the help of producer Ryan Murphy. Reuniting with his 2018 cast, Mantello will bring Crowley’s 1968 Manhattan fete to the small screen with a handful of familiar names gathering to portray the party attendees.

Parsons (Big Bang Theory) plays Michael, a screenwriter and the party host; Quinto (Star Trek) is the birthday celebrant, Harold; Bomer (White Collar, Magic Mike) is Donald, one of Michael’s exes; Tuc Watkins (Retake, The Mummy) is Hank, a man who just left his wife and moved in with Larry, an artist played by Andrew Rannells (Girls, The Book of Mormon); Michael Benjamin Washington (30 Rock) is Bernard, a librarian; Robin de Jesús (Camp) is Emory, a decorator; Charlie Carver (Teen Wolf) is Cowboy, who was hired as Harold’s birthday present; and Brian Hutchison (The Sinner) is Alan, Michael’s former college roommate whose surprise arrival kicks off a night of deep self-reflection. 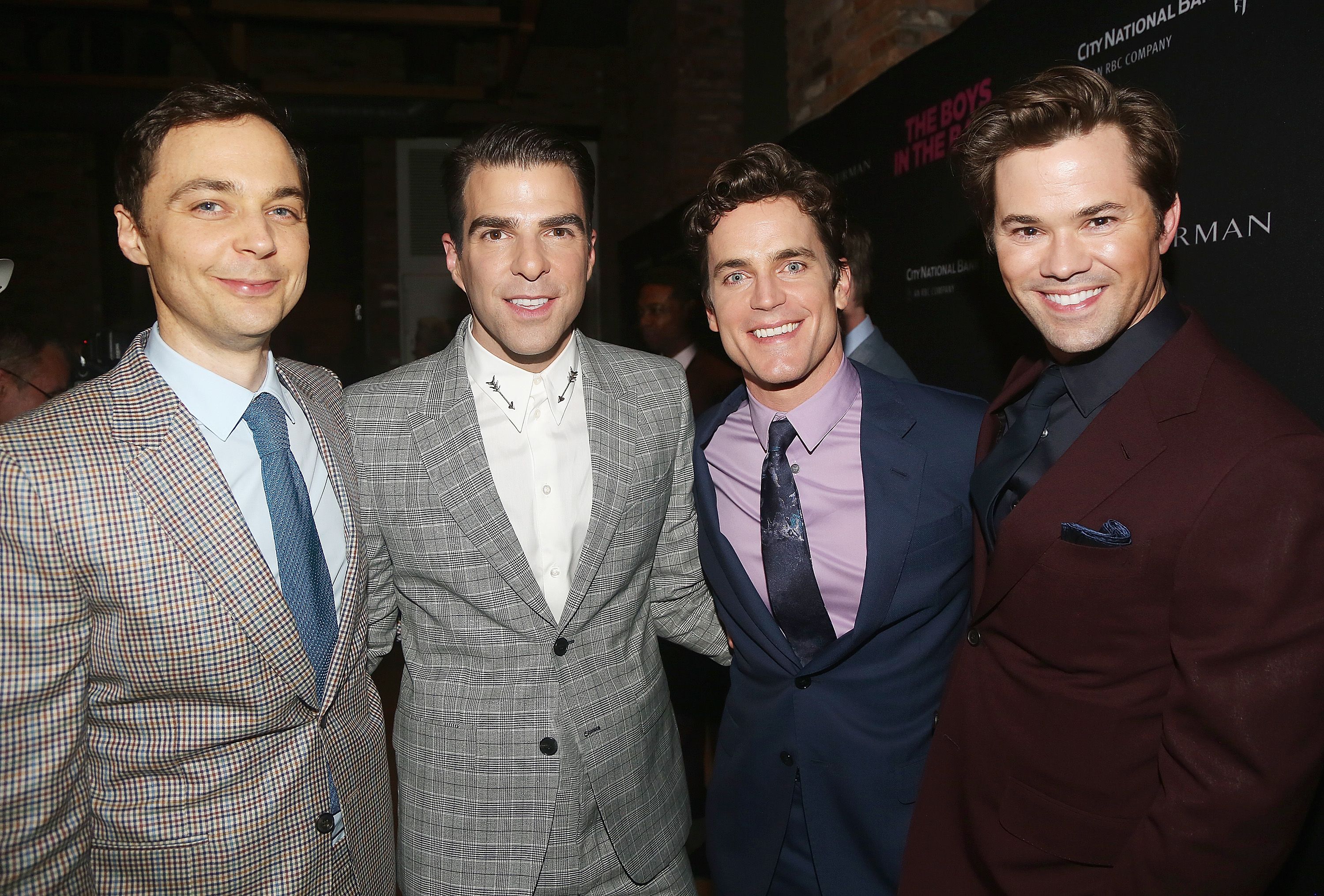 Arriving just before the Stonewall uprising, Crowley’s work was deemed controversial during its first release but is also now considered a milestone in representing gay lives onstage. It’s also not immune to critique. “From the beginning, Boys has been criticized for catering to some of the deepest and most damaging stereotypes of gay life: the nelly, the show queen, the self-loathing closet case,” critic Leah Greenblatt wrote of the 2018 revival for Entertainment Weekly. “Certain facets do feel dated in their own ways, but to scrub them entirely would also feel like a denial of the truths and the time the play is rooted in.”

Similarly, theater critic Terry Teachout pointed out in The Wall Street Journal that Boys “later became controversial in a different way because it portrayed its gay characters as bitter and self-hating, a stance that appalled younger men not old enough to remember the tightly closeted world portrayed with unflinching candor by Crowley. Today it is regarded as a kind of time capsule, a gay history play that shows how things were in the bad old days.”

This isn’t the first time The Boys in the Band has been adapted for the screen. Director William Friedkin (The Exorcist, French Connection) turned it into a film in 1970 using the original off-Broadway cast. Watch the first trailer for Netflix’s version above.