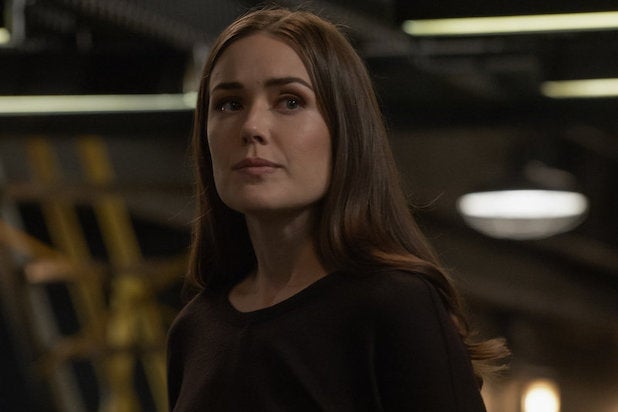 (Warning: This post contains spoilers for Friday’s Season 8 premiere of “The Blacklist.”)

“The Blacklist” kicked off its eighth season tonight with multiple shocking moments, including one that fans have been waiting for since the series began: a kiss between Elizabeth Keen (Megan Boone) and her longtime partner Don Ressler (Diego Klattenhoff).

There were plenty of other shockers in the NBC drama’s Season 8 premiere, like Katarina’s (Laila Robins) theory that Red (James Spader) is actually a notorious operative known as N-13, who tried to kill her many years ago on the other’s of her father, Dom (played by Ron Raines, following the death of actor Brian Dennehy). But it’s a little hard to focus on anything but that smooch at the moment.

However, when TheWrap spoke with “The Blacklist” creator Jon Bokenkamp and executive producer John Eisendrath about the episode, titled “Roanoke,” we managed to compose ourselves long enough to get in a few other questions about where the season is headed. But first, let’s start with the kiss.

TheWrap: The kiss between Liz and Ressler, wow. Why now? Was it just to get the gun? Is there more there? Where is this going now that she’s on the run?
Jon Bokenkamp: All those questions are legitimate, and I think the answer is all the above. Was the kiss real and did it come from an emotional place? Yes. Was Liz using Ressler? Yes. Could she have used him if it wasn’t a real, earned moment? No. It’s such a complex moment filled with so many emotions — that’s what I like about it. What’s even better is where this story goes. Trust me, that kiss between Ressler and Liz is the beginning of a really great story that’s been years in the making.

John Eisendrath: Yes there is more! But their feelings for each other will be at odds with what they are doing — Liz on the run and Ressler trying to track her down. Will Liz take advantage of Ressler’s feelings — like she did to get his gun — or will Ressler be able to use her feelings for him to try and get her to come back? Stay tuned!

Red told Cooper that what Liz did by betraying them in this episode and kidnapping Dom was her “destiny.” What does that mean?
Bokenkamp: I think what Red was talking about goes to the core of who Liz is. Is she fundamentally good? Is she fundamentally bad? Has she reached a tipping point that she can’t return from, or was this meant to be because it’s in her DNA? We’ve seen Liz dip her toes in the dark waters over the years — she’s certainly not that innocent, young FBI agent that we met in the pilot — and this season is going to explore her darker side. I think the real question lies in seeing how she navigates these dark waters and, if she does survive this, how she looks when she comes out the other side.

Eisendrath: This has been a question since the pilot. First when she thought Red was her father; later when she realized Katarina Rostova was her mother — how much of a parent’s behavior is a child destined to repeat? In Liz’s case, how much bad behavior?

Katarina gave us the story of N-13 in the premiere, laying out for Liz her main reasons for wanting revenge against her father and Red. Should Liz trust Katarina’s assertion that Red is N-13 and that that is the entire reason he’s spent this time getting close to her?
Bokenkamp: Liz has no reason not to trust Katarina. This isn’t a head fake. Liz isn’t using her mom or gaming her in some way. These are very real emotions, and their joint search for answers is just as real. Is Red N-13? Is he using Liz and the task force? If so, for to what end? All these things get to the heart of who Reddington is and why he entered Liz’s life eight years ago. And I hope the answers that lie ahead — the very concrete answers we’re racing toward — will be incredibly satisfying.

What does Katarina intend for Liz to do to get answers out of Dom?
Bokenkamp: To connect with him. Reach him emotionally. Katarina’s hoping that Liz can peel back the hard, protective shell that Dom has put up and maybe, just maybe, get him to open up about the truth. I might add, he does open up, but not for the reasons Katarina imagined.

Eisendrath: Whatever is necessary.

Red told Dembe that he has finally lost Liz, and he let it happen. If Red always knew this was a possibility, then why did he “let it happen,” rather than be honest with her and give her the answers to questions she’s been asking him for seven years?

Bokenkamp: It sounds unforgivable, right? If he cares so much about her, why would he ever risk losing her? Why risk pushing her away? Trust me, it’s complex, it’s muddy, and it’s the entire reason you have to watch this season!

“The Blacklist” airs Fridays at 8/7c on NBC.