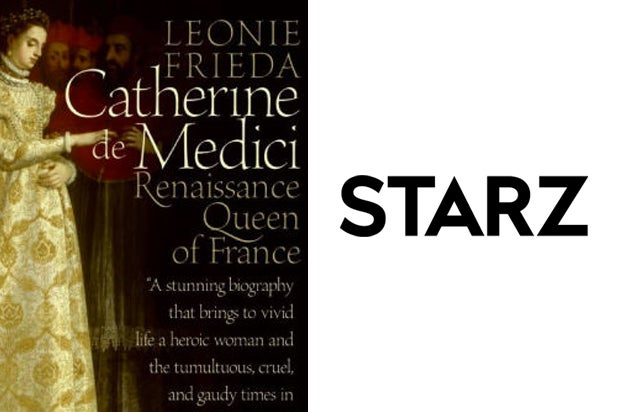 Starz is adding another series about female royalty to its lineup, ordering the Catherine de Medici drama “The Serpent Queen,” the pay TV channel said Thursday.

The eight-episode series, which is based on the book “Catherine de Medici: Renaissance Queen of France” by Leonie Frieda, will be written by Justin Haythe (“Revolutionary Road,” “Red Sparrow,” “The Lone Ranger”).

Per Starz, “Considered an immigrant, common and plain, Catherine de Medici is married into the 16th century French court as an orphaned teenager expected to bring a fortune in dowry and produce many heirs, only to discover that her husband is in love with an older woman, her dowry is unpaid and she’s unable to conceive. Yet, only with her intelligence and determination, she manages to keep her marriage alive and masters the bloodsport that is the monarchy better than anyone else, ruling France for 50 years.”

“‘The Serpent Queen’ may be the most cunning account of one of the most influential women ever to wear a crown that Starz has told,” Christina Davis, president of original programming for Starz, said. “We are thrilled to be working with such an incredibly talented team who will give this series a modern voice among a sensational historical backdrop.”

Haythe added: “Writing Catherine and her story has been truly exciting as she is a very complex leading character who becomes a skilled ruler, battling extraordinary political and personal odds throughout her reign. She is a Queen who defies convention, as she relies upon her intellect, her unusual entourage and a ready supply of black magic inspiring, centuries later, the Evil Queen of fairy tales.”

Haythe will executive produce “The Serpent Queen” along with Francis Lawrence and Erwin Stoff. Stacie Passon will direct multiple episodes of the drama, including the series premiere.

The show is produced for Starz by Lionsgate Television and 3 Arts Entertainment. Senior vice president of original programming Kathryn Tyus-Adair is the executive overseeing “The Serpent Queen” on behalf of Starz. Courtney Mock is overseeing the series on behalf of Lionsgate.

“The Serpent Queen” is the latest period drama to be picked up at Starz. The pay TV channel is currently working on “Becoming Elizabeth” about the early days of Queen Elizabeth I, and an Eleanor of Aquitaine series as part of an anthology about “lesser known” women in history. Starz is also the home of “The White Princess” about Elizabeth of York and “The Spanish Princess” about Catherine of Aragon.