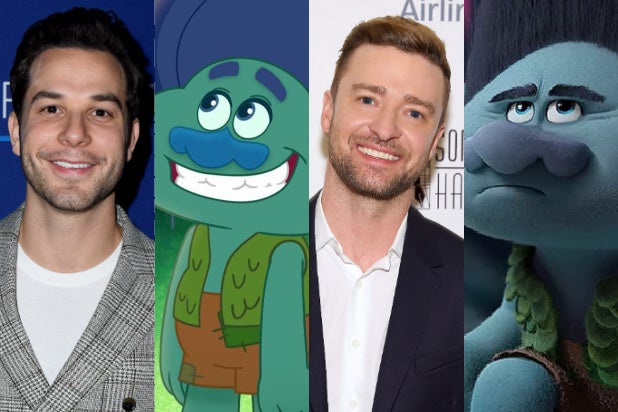 Though Astin is a successful actor (Jane Levy’s co-star on NBC’s “Zoey’s Extraordinary Playlist”) and talented singer (he also played Jesse in the “Pitch Perfect” movies) in his own right, those are some pretty big troll feet to fill.

How did he approach that? Astin kind of didn’t, he told TheWrap — or at least he didn’t try to be *NSYNC with JT’s Branch for very long, thanks to one wise creator/executive producer named Matthew Beans.

“I’ve only seen the ‘Trolls’ movie one time, the original film, and I’ve yet to see the sequel. And that’s not for any real reason. But when I was auditioning for the original ‘Trolls: The Beat Goes On!,’ they sent me some audio samples of Justin Timberlake, just so I had a reference, because the movie had not come out yet,” Astin told TheWrap. “And I came in there and was doing the sides that they have given me for the series, and I was maybe doing, trying to match the sound of kind of what he did and the Justin Timberlake speaking voice a little bit. And that was when the creator Matthew was like, ‘Oh hey, by the way, if you’re trying to sound at all like those audio samples, I’m not even sure why they sent you those. Literally, just like do what Skylar would do as an acting choice and a comedy choice.’”

Since that interaction, Astin says he’s developed his Branch “in such a way that I don’t actually know what Justin’s sound like.” Well, kind of.

“Randomly, I’ll be on Instagram or something, I’ll see the ‘Trolls’ account post something from the movie and I’ll hear Anna Kendrick (who plays Queen Poppy in the films, a role Amanda Leighton takes over on TV) and I’ll hear Justin and I’m like, ‘Oh my God, am I doing a terrible job?’” he said. “Like, I have no idea if I sound like this dude at all. But I know my Branch and I know his voice and I know the way they write to his voice and now my voice.”

“So I honestly, while in theory, it’s like this big undertaking, I don’t even see it that way,” Astin added. “And maybe that’s because Matthew empowered me to feel that way in the beginning.”

Good job, Matthew (and yes, you too, Skylar — like the movies, the “Trolls” series are actually pretty enjoyable for adults too).

But in what ways is Astin’s Branch different than Timberlake’s, other than his sound and some less expensive animation?

“I guess we just created our own version of the character who delves a little deeper, just because we have more quantity of episodes to do so,” Astin said. “And I think my Branch might be a little bit more neurotic, you know, and overly sensitive at times. Which, I like playing the comedy of that.”

After some reluctance on his part in the first movie, Branch and Poppy become inseparable best friends. But are they romantically into each other? It kind of depends what version you watch, and how old the person is watching it.

“I don’t look at it that way,” he said when we asked if the blue and pink Trolls are a will they/won’t they couple. “I can’t speak for the movie and I heard, especially in the second one, that they kind of start to learn toward that. But it is for kids, and that’s not to say that love stories can’t exist for kids, I just– I think it’s a deep connection. It is a love. There’s no question that there is a love, there is a respect. But there is also love between siblings, there’s love between friends. And I personally think that there is more value of ending a finale with a beautiful handhold or a hug than a kiss on the lips, for these characters.”

“So that’s the way, that’s with the heart that I approach Branch and Poppy,” he continued. “That it is a connection that I would never call a friend zone, but I would never call it husband and wife. A partnership, a connection. Something that exists beyond our human norms even, like how we trolls fall in love. Like, what does that even mean?

We have no idea what that even means. And clearly, Astin’s thought about it even more than we have.

Both “Trolls: The Beat Goes On!” seasons can currently be found on Netflix. Those serve as the sequel series to the first “Trolls” movie and the prequel series to “Trolls World Tour.” Seasons 1 and now 2 of “Trollstopia,” which in the universe follows “World Tour,” are available on Peacock.