Summer’s Blockbuster Ads Have the Same Message: Come Back to Theaters

“Let’s Be Real” does not

Fox settled for a four-way primetime ratings tie with CBS, Univision and Telemundo last night. The CW was again alone in seventh place.

ABC and NBC tied for first in ratings, both with a 0.6 rating in the advertiser-coveted 18-49 demographic. ABC had a 5 share, NBC got a 4. ABC was first in total viewers with an average of 10.2 million, according to preliminary numbers. NBC was second with 3.7 million total viewers. 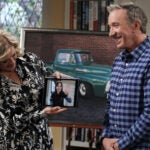