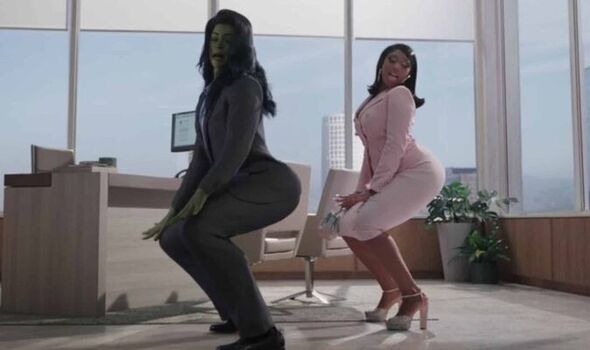 While some fans were divided by the singer’s guest appearance, most were delighted to see Marvel take a lighter approach, with the post-credit twerking scene taking social media by storm and showcasing the MCU to a different audience.

And it turns out nobody was happier with Disney than Megan herself for embracing the cameo, as a co-star claimed she’s actually “a huge Marvel fan”.

Megan’s appearance came during legal proceedings against an Asgardian shapeshifter being sued for damages after they took the form of the rapper and pretended to be a rival lawyer’s girlfriend, rinsing him out of nearly $200,000.

The real rapper later shows herself in the courtroom’s public gallery – and in the episode’s aforementioned post-credit scene, hires She-Hulk, played by Tatiana Maslany as her own lawyer.

It turns out the cameo was all down to Jameela Jamil, who we haven’t seen much of yet but plays influencer villain Titania in the series. Jamil had a relationship with Megan after the pair worked together on HBO Max’s Legendary.

She told The Hollywood Reporter at the show’s premiere that she “had a feeling she’d be a great actor because she’s good at everything”, adding: “I just asked her and she turned out to be a huge Marvel fan.”

“She looks amazing on camera,” said Gao before elaborating on the viral twerking scene, adding: “Tatiana said that she thinks it’s the single most important scene in the MCU and I agree with her, it really is..”

She-Hulk: Attorney at Law is now streaming on Disney+.