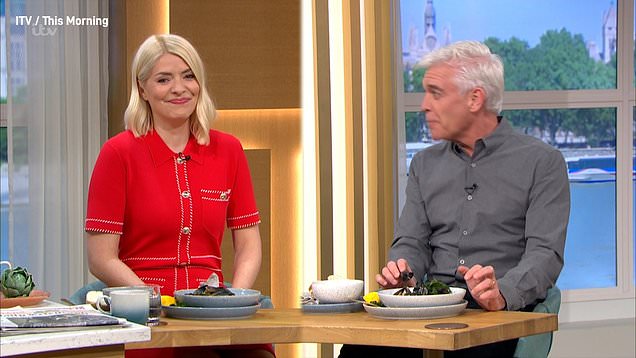 Holly Willoughby was left absolutely red-faced on This Morning when Phillip Schofield exposed her secret trick for avoiding food she doesn’t like.

On Thursday’s edition of This Morning, Holly, 40, and Phillip, 59, were treated to a bowl of mussels each.

Earlier on in the programme, they were served a taco dish by chef Clodagh McKenna, with Phillip making an embarrassing gaffe when he mistook the pork in the recipe for a vegan alternative.

While eating the mussels, Holly took the opportunity to poke fun at Phillip’s previous pork blunder… prompting her co-host to get revenge with a hilarious comeback of his own.

After Phillip described the mussels as ‘absolutely stunning’, Holly jokingly asked him: ‘As far as you’re concerned, are those mussels?’

As Holly laughed nervously, Phillip then disclosed what Holly had just told him off-camera about her technique for pretending to eat mussels, which she’s not the biggest fan of. 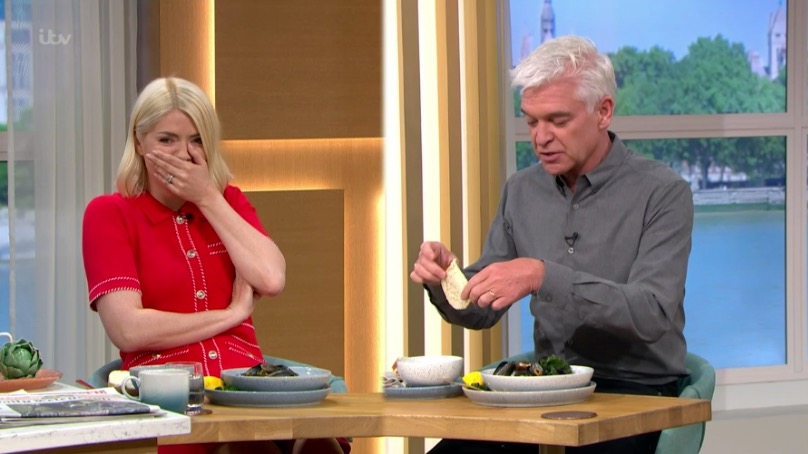 ‘Well, alright then. You just put… I was going to let this go! – You just said, “Do you know what I can’t eat them, I don’t like mussels. What I’m going to do is I’m going to break a bit of bread and put it inside this shell,”’ Phillip said, as Holly covered her mouth in shock.

‘Right, there you go! I’ve just flexed my muscles!’ he stated.

She explained that she does actually like mussels, but prefers to ‘eat them in the dark’.

To prove her point, she then ate a mussel on camera, refraining from looking at it as she placed the seafood in her mouth.

Earlier this week, Phillip and Holly absolutely lost it while interviewing a woman who sells videos of herself farting.

Before the interview even began, with the guest tuning in virtually from the US, Holly was reduced to giggles while Phillip nicknamed the woman, named Emma Martin, as ‘Farting Martin’.

Holly apologised to Emma for being unable to contain her laughter, but did defend herself by stating that ‘farting is funny’.

If you’ve got a celebriy story, video or pictures get in touch with the Metro.co.uk entertainment team by emailing us [email protected], calling 020 3615 2145 or by visiting our Submit Stuff page we’d love to hear from you.