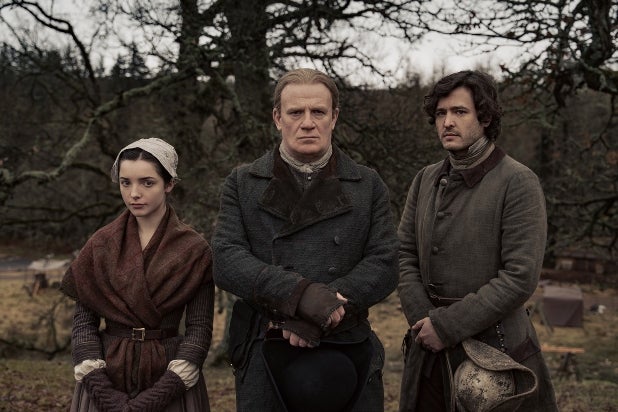 Starz’s version of “Outlander” has found its Christie Family.

The trio, who play a key role in the upcoming sixth season, includes Mark Lewis-Jones as Tom Christie, Alexander Vlahos as Allan Christie and Jessica Reynolds as Malva Christie.

Season 6, which is currently filming in Scotland, still does not have a premiere date.

The hit TV show (especially among women) is an adaptation from Diana Gabaldon’s bestselling book series. Ronald D. Moore adapted the novels for Sony Pictures Television; Matthew B. Roberts is showrunner. Season 6 of “Outlander” will be based on “A Breath of Snow and Ashes,” the sixth of eight books in Gabaldon’s written series. The show has already been renewed for a seventh season.

Here is how Starz describes the upcoming season:

The sixth season of “Outlander” sees a continuation of Claire and Jamie’s fight to protect those they love, as they navigate the trials and tribulations of life in colonial America. Establishing a home in the New World is by no means an easy task, particularly in the wild backcountry of North Carolina – and perhaps most significantly – during a period of dramatic political upheaval. The Frasers strive to maintain peace and flourish within a society which – as Claire knows all too well – is unwittingly marching towards Revolution. Against this backdrop, which heralds the birth of the new American nation, Claire and Jamie have built a home together at Fraser’s Ridge. They must now defend this home – established on land granted to them by the Crown – not only from external forces, but also from the increasing strife and conflict in the community within their care. For the Frasers and their immediate family, “home” is more than simply a site in which they live, it is the place where they are laying the foundations for the rest of their lives. If Season 4 asked “What is home?” and Season 5 asked, “What are you willing to do to protect your home?” then Season 6 explores what happens when there is disharmony and division among the inhabitants of the home you’ve created: when you become an outsider, or an ‘outlander,’ so to speak, marginalized and rejected in your own home.