Home » TV and Movies » One Day at a Time Season 5 release date and cast latest: When is it coming out?

One Day at a Time was one of the top-ranked shows on Netflix, but its viewership numbers were not enough to keep it alive after three seasons.

Pop TV came along and brought it to its network for the fourth season, but they also canceled it after just one more season.

The show is not finished, though, and thanks mostly to the high critical praise, has a chance to find a new network for a fifth season.

Here is everything we know so far about One Day at a Time Season 5.

This article provides everything that is known about One Day at a Time Season 5 and all related news. As such, this article will be updated over time with news, rumors, and analysis. Meanwhile, let’s dig down into what is known so far.

Is there going to be a Season 5 of One Day at a Time?

Variety reported that Pop canceled One Day at a Time after just one season on its network.

This is the second time that the show has been canceled, as Netflix axed it after three seasons. However, there is a reason for hope.

The showrunner, Gloria Calderón Kellett tweeted out after the Deadline story broke that things were not dead yet for One Day at a Time. In her tweet, she said:

Sadly, the news is out. I’m not sad just yet, y’all. We still have some hope for new homes. Hang tight, my loves. You know that if I go down, I will go down swinging for this show (& cast & crew) I love.

This ties into what Variety reported as well.

According to an individual with knowledge of the situation, series producer Sony Pictures Television will shop the series to other outlets yet again.

Despite lower viewership totals, and a fourth season that was aired on Pop, TV Land, and CBS, it scored high with a 99-percent approval rating on Rotten Tomatoes.

Release date latest: When does One Day at a Time Season 5 come out?

Executive producer Mike Royce also chimed in on the possibility of One Day at a Time Season 5.

“So… yes. Much has changed at Viacom in the last year and unfortunately we won’t be on Pop anymore. Thanks to everybody over there for the opportunity to do season 4. And guess what? We’re still trying for season 5. What if #ODAAT was the first show ever on 3 networks?” 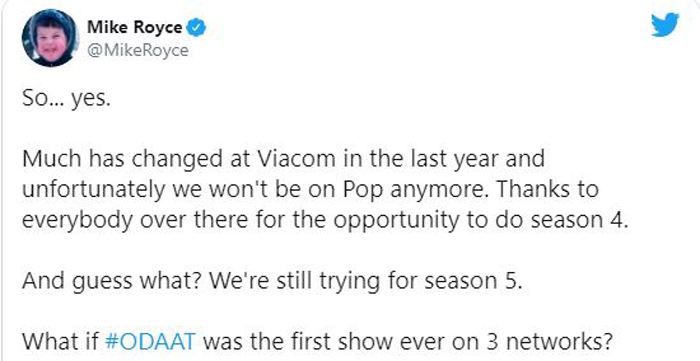 In today’s world, there is no word on when shows could come out, even when renewals are handed out.

The coronavirus pandemic has shut down production once and with higher spiking cases this winter, it could happen again.

When more information is available, we will update this article.

One Day at a Time Season 5 cast updates

One Day At A Time followed three generations of a Cuban-American family.

Justina Machado starred as a newly-single mom and military veteran and goes through triumphs and tribulations while raising two strong-willed, mega-millennial children.

Isabella Gomez and Marcel Ruiz star as her kids. Rita Moreno stars as her old-school mother.

“Maybe third network’s the charm?” Gomez tweeted. “Seriously, regardless of what happens, familia para siempre. And I’ll have a sappy post coming when we find out which way this goes. I love you guys.” 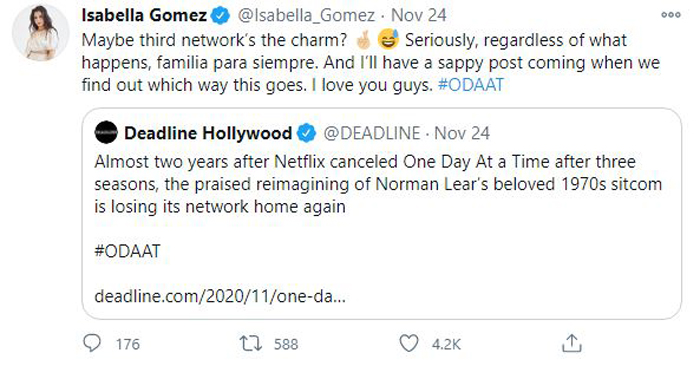 One Day at a Time Season 5 spoilers

One Day at a Time is based on the classic Norman Lear sitcom starring Bonnie Franklin, Mackenzie Phillips, Valerie Bertinelli, and Pat Harrington Jr., in 1975

The new version transformed the family into a Latino-American one, which brought in a lot of issues that modernized the classic comedy series.

The show received a lot of praise for its inclusiveness and subject matter, making it one of the more quality shows on TV recently.

These include topics like mental issues, immigration, sexism, homophobia, gender identity, and racism faced by the Latino community in the United States.

The good news is that, if there is never a fifth season of One Day at a Time, the fourth season ended on a high note with a bright outlook for the future.

Penelope and Max, Elena and Syd, and Alex and Nora were all going strong. The best news is that father-to-be Schneider proposed to Avery, and that promises the best of endings.

Also, the widowed Lydia received the closure she needed and she was able to scatter Berto’s ashes in the rooftop garden.

Kellett did say on the night of the Season 4 finale that, if this is it, they are going to celebrate.

“Not gonna lie, y’all, this might be it for our little show. We’ve loved making this show [and] we want to celebrate it tonight!”

There is no announcement on when One Day at a Time Season 5 will premiere.