As we’re all pretty familiar by now, Disney has been on a thirsty “LET’S TAKE OUR MOST BELOVED ANIMATED MOVIES AND TURN THEM LIVE-ACTION” kick lately. Which, honestly, doesn’t always go as well as they’d like. But please be advised: the frozen spirit of Walt Disney is not, in fact, responsible for the upcoming live-action version of Cinderella. It turns out Sony is out there coming for the brand with its own rendition, and no offense to the 2015 version with Lily James: this one is already my favorite.

Here’s what you need to know about the upcoming movie, starting with this extremely important piece of news:

Not sure how she found time in her walking around the streets of Florida with Shawn Mendes to take on a project of this magnitude, but here we are. On top of playing Cinderella, she is also in charge of the music for the film. Soooo…expect good things, duh. Like, this movie better feature a bunch of live-action mice singing “Señorita,” that’s all I’m saying.

Just one note re: the music—because Disney has nothing to do with this project, classic songs from the animated Cinderella (think “A Dream Is a Wish Your Heart Makes”) likely won’t be included.

Let’s just take a quick moment to !!!!!!!!!!!! This casting is perfection, and Billy already took the liberty of spilling some details to CBS in March 2020, confirming that he’s playing the role as genderless:

I mean, just look at him and tell me he isn’t the epitome of Fairy G realness. 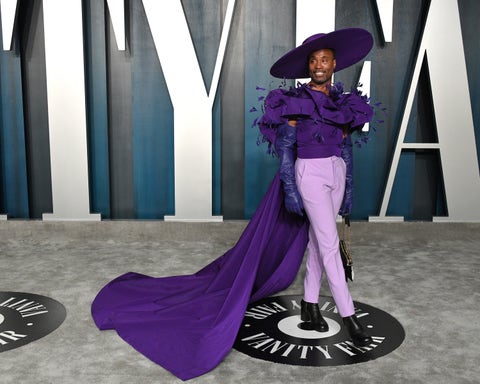 Filming Was Postponed Due to the Coronavirus Pandemic.

Much like it halted literally everything else in life, COVID-19 shut down production of Cinderella back in March. The film was originally set for a February 2021 release date, but something tells me it’s not coming out until this pandemic is behind us. Camila posted photos from set, though, so at least you can get an idea of the vibes:

Idina Menzel Is Set to Play the Evil Stepmother.

Again, the casting is perfect.

(P.S. For those of you who don’t know, Idina plays Elsa in Frozen.)

In case you’re in a state of “Whomst?” this guy stars in Chambers and is in the upcoming Craft reboot. Also, apparently, he “wowed the filmmakers in many chemistry readings.”

Let’s see…per Deadline, Pierce Brosnan is playing the king, Minnie Driver is playing the queen, Missy Elliott is playing the town crier, and the mice include the likes of John Mulaney, Romesh Ranganathan, and James Corden (who’s also producing).

Literally cannot wait for life to be normal so I can see this movie. And, you know, safely leave my house in general.

Time to get yourselves ready for that virtual ball, because the movie is expected to drop on Amazon Prime. Yes, we know—it’s kinda odd for it to drop there and not another site like Netflix or HBO Max. But hey—at least we don’t have to leave our couches for this one.

Variety personally delivered this news in early May, saying Sony wanted to initially bring it to theaters, where all movies should be played. But, given the pandemic and people still not being comfortable walking into their local cinemas, they decided to go the streamer route and give fans the option to watch it from the comfort of their homes. Understandable, and honestly, we really lucked out with this.

It is our great pleasure to announce our friends at @AmazonStudios will be joining us at the ball. Do stay tuned, dears. ✨ https://t.co/IA8yMX7R5R

We Now Know When the Movie Will Come Out.

Get those glass slippers ready, because the movie is expected to drop into our queues in September. The last we heard, the movie was being pushed back from July, after it was already pushed back this past February.

And We Have a First Look.

Hallelujah. And let me just ask this right off the bat: how the heck does Camila look so good in peasant’s clothing?

And let’s not forget the beauty that is the photo of Camila and her Prince Charming, Nicholas. I mean, it’s only one photo, but Nick can stare into my eyes any day of the week. And before you ask—YES, I NOTICED THAT GORGEOUS DRESS. 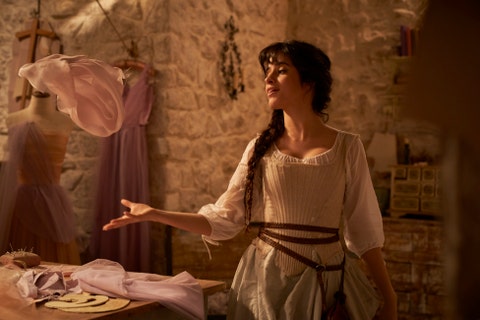 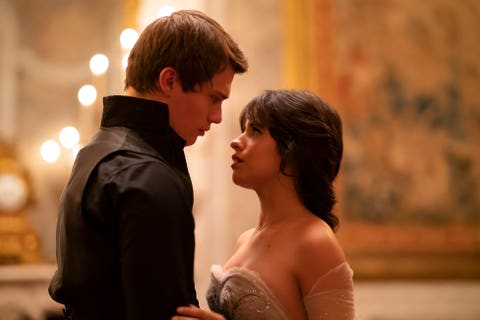