EXCLUSIVE: When Oscar-nominated director Paul Greengrass began working on News of the World, he said he set out to create a family movie with purpose and edge. However, he didn’t expect the film’s touching on pandemics and a politically divided country to strike such a chord with current events.

“It was sort of eerie and uncanny,” Greengrass told Deadline. “All you can do is embrace that.”

Based on Paulette Jiles’ 2016 novel, Universal’s News of the World follows beaten-down Confederate soldier Capt. Jefferson Kyle Kidd (Tom Hanks) as he seeks to promote unity and positivity after the the Civil War. He travels from one Texas town to another reading newspaper stories to residents looking for light amid the country’s post-war divide.

However, Kidd’s storytelling tour is halted when he comes across a 10-year-old named Cicada, whose life has consisted of one horror after the next, including being raised by the Kiowa Native American tribe that killed her family years earlier. Kidd decides to help the lost girl find her way back home to her aunt and uncle.

Featuring two characters who despite their experiences and backgrounds forge a strong bond, News of the World serves as a blueprint for healing a divided country, Greengrass said.

“It is a film for our times and it’s about the healing power of storytelling,” he added. “I think that’s something we all need now.”

Read Greengrass and Davies’ News of the World script below. 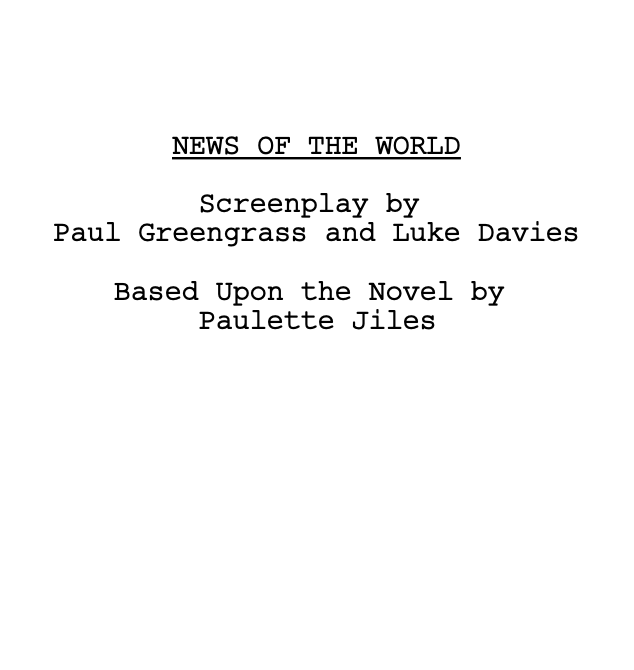 ‘Judas And The Black Messiah’: Read The Screenplay For Timely Story Of Black Panther Party’s Fred Hampton Vs. The FBI

‘One Night In Miami’: Read The Screenplay For Regina King’s Icon-Packed Directorial Debut