“Kapaemahu” would make history as the first Native Hawaiian animated short to be nominated for the Oscar. But it’s an important transgender breakthrough as well. The eight-minute 2D short tells the long-forgotten story about the four stones on Waikiki Beach placed as tribute to four legendary mahu (third gender individuals), who brought the healing arts from Tahiti to Hawaii in the 15th century.

“Kapaemahu,” directed by Hinaleimoana Wong-Kalu, a Native Hawaiian teacher and mahu, along with Dean Hamer and Joe Wilson (“Kumu Hina,” the award-winning 2014 documentary about Wong-Kalu), couldn’t be timelier with this indigenous transgender tribute, bolstered by an exquisite hand-drawn aesthetic from animation director Daniel Sousa (the Oscar-nominated short “Feral”). The story demonstrates the healing powers of the Kapaemahu, the suppression and burial of their monuments, their recovery at the end of the 20th century, and the renewed interest in their legacy today. The short is available on The Criterion Channel and also for free on Vimeo.

“It took a decade of research, but our animation brings to light those points in history about people who occupy a space that encompasses two spirits or more,” said Wong-Kalu. “On so many levels, my experience was rewarding and eye-opening. In the case of bringing Kapaemahu forward, it’s not just a legend — it’s part of our history.”

The moment Wong-Kalu told Hamer and Wilson about the legendary mahu, they invited her to join them on a follow-up project, making her lead director and driving the story from her unique perspective. “The fact that it’s coming out now, with a story of healing during this pandemic, through the [animation] of Daniel, is important,” Wilson said.

But after a decade of research, it took a couple of catalysts to finally make the short. The first was the recent discovery of an original manuscript from 1908. “There were a lot of alternations to the story,” Wilson added, “especially in the last 50 years. At first, we weren’t sure what was really right. But this is as far back as we can go in history [with clarification].” 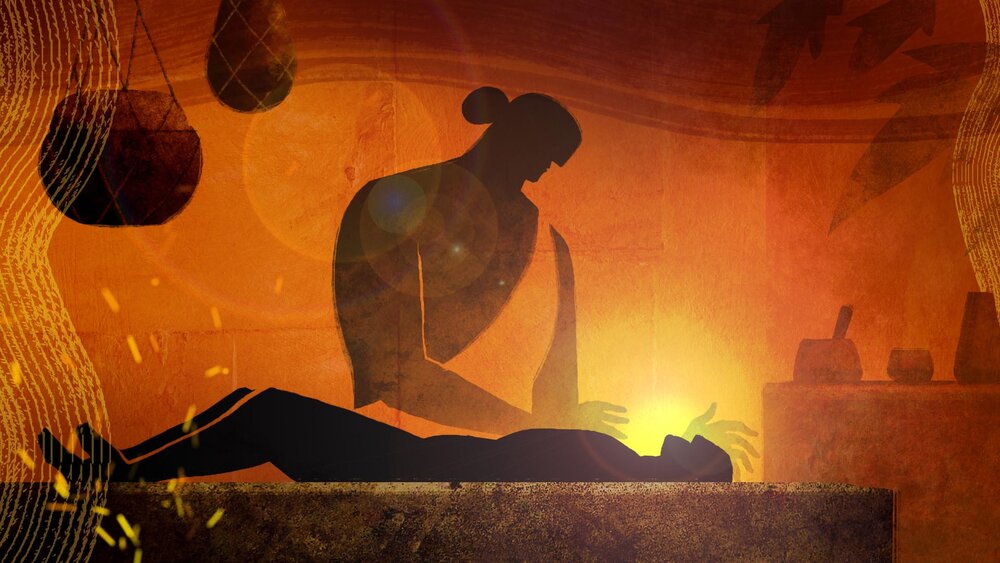 The other catalyst was that they realized after making “Kumu Hina” the popularity of a brief animated sequence. That provided the story and the format. “I personally have enjoyed the animation,” added Wong-Kalu. “It has opened my eyes to harnessing the power of this format. And, as someone who grew up on animated cartoons, I clearly knew about it, but in actually utilizing animation as a tool to teach was just great.”

Design and animation, meanwhile, occupied Sousa for more than a year, but he benefited from indigenous research supplied by his colleagues. “We gave Daniel a lot of tapa cloth for the palette and the textures, lauhala weaving, but there is not a lot of 2D drawn art in Polynesian history,” Hemer said. ” It just wasn’t that much of a form. But there is a history of sculpture, and the Tikis are very famous examples, so that was informative and quite detailed. It gave the characters a style that really reflects that monumental presence of Tikis.”

But there were two other essential pieces of reference: the actual stones, which determined the weight, physicality, and texture of the rock, and the physical presence of Wong-Kalu, who served as a model for the characters in look and performance. “I locked down the shape language for the characters and world building before animation,” Sousa said, “but I wanted the animation to appear alive.” It’s predicated on tableaux he soaked with lighting and atmosphere, particularly a boiling texture, in combination with a constantly moving camera, which provided the breath of life. 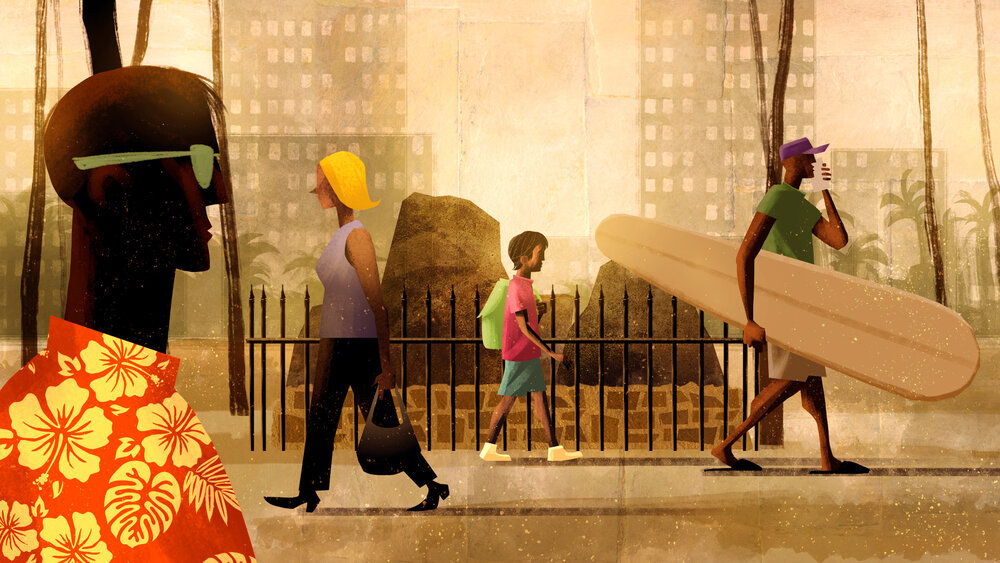 Sousa animated in Flash (renamed Animate), then painted over it and added landscapes in Photoshop, and then layered in textures, and composited in After Effects.  A very warm palette of rich earth tones taken from the tapa cloth inform most of the short, with the present-day coda being informed by cooler blues, and greens. “One of the design challenges was devising a visual language with parallels in different parts,” he said.

“For instance, the depiction of the dual spirits of the mahu as intertwining bands of light and dark color,” added Sousa. “They still retained their identity even though they were braided together. This kind of motif originally was just going to be used when we introduce the idea of the mahu, but then we found we could use the motif for other parts of the film. We realized that these intertwining, wavy lines could actually morph into the waves of the ocean at the beginning, or as rising smoke inside the huts, or in the background in the very last scene when we’re reintroducing the characters again.”

For Wong-Kalu, the short represents a testament to the legacy of the four mahu heroes and its significance to the transgender community. “I think what’s important about that is Americans suddenly decided that transgender people existed four years ago and started talking about it. And then there was the question of: Should they be tolerated? No, they should be accepted. But I think this monument says people of dual birth should not only be respected but admired because they bring qualities and abilities that are extraordinary, and have always been there and will remain there for a long time.”