While James Martin fronts his own Saturday Morning cooking show, he is a resident chef on This Morning. At the beginning of the week, he was on hand serving up two dishes, a simple, full-flavoured tomato sauce two ways and then a quick and easy summer fruit pudding. However, those watching at home were stunned when the TV personality threw in four pinches, or arguably handfuls of salt into boiling water for his pasta.

When discussing his choice of dish, Ruth Langsford said: “People might think ‘Mmm tomato sauce’. But there are some ingredients in yours we might not expect.”

The camera then switched to James who was cooking from his garden in Hampshire who replied: “Tomatoes! Yes. But the key to it really is the quality of the tomatoes.

“That’s the key to Italian cooking in general really. 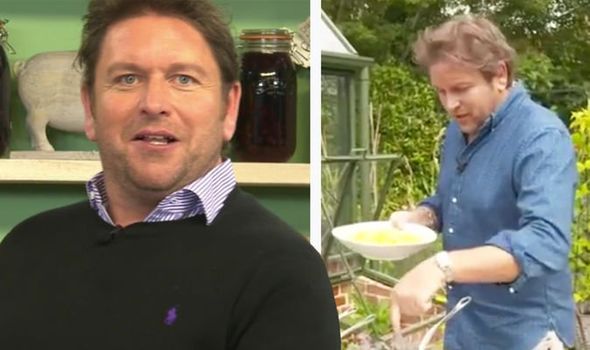 The chef then explained to viewers the steps needed, starting with: “First of all, I’m going to get on and cook our pasta.

“We’ve got some fresh pasta and it takes about five minutes [to cook], but when you’re cooking pasta – the late great [Antonio] Carluccio taught me this – season the water.

“That is a pinch of salt,” James remarked dropping the salt into the pan of boiling water. 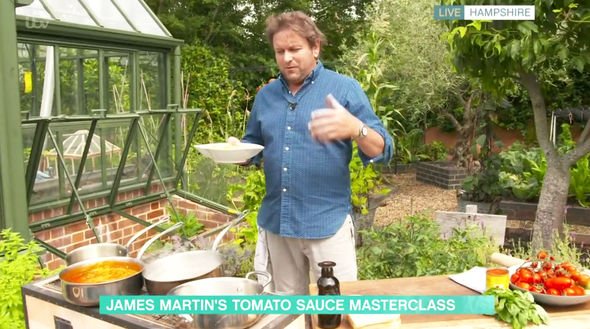 “So when I learnt to cook this dish, this was with Carluccio and it was with sardines, we were in the Amalfi [Coast], and he just took – literally a pan of water out of the sea to cook the pasta.

“He said ‘it needs to taste like seawater!’ It was amazing!

“So you just put the pasta straight in – no oil! It’s contrary to what people think, it makes it stick, you don’t need oil into that,” James added. 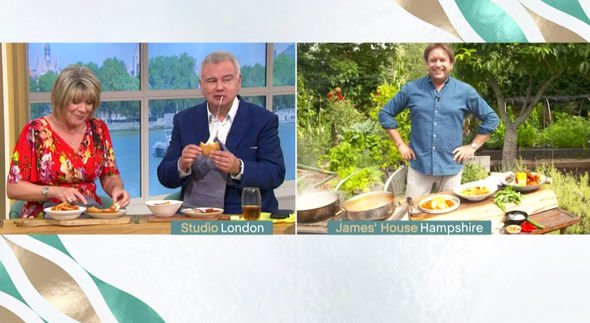 Viewers were taken aback by the volume of salt which he added to the water and took to Twitter to comment.

“Jesus Christ we know @jamesmartinchef likes to cook in large quantities but how much salt does the guy want to use #ThisMorning,” one said.

A second added: “Next: Why salt is really bad for you #ThisMorning.”

Another wrote: “Salt is bad for you you don’t need Salt in food #ThisMorning.”

Someone else remarked: “James doesn’t do healthy! #ThisMorning.”

“Sorry but that’s far too much faff just for a tomato sauce  #ThisMorning,” a viewer commented.

Ruth and Eamonn sampled the dish and didn’t complain about salty pasta!