The Cabinet Minister said his thoughts and prayers were with Boris Johnson and his family as the Prime Minister fights coronavirus in intensive care. Appearing emotional on ITV Good Morning Britain, Michael Gove said “it’s terrible” to know Mr Johnson is struggling to breathe and is fighting for his life in St Thomas’ hospital. He said: “We are just hoping and praying that he pulls through. It was a shock yesterday to hear the news about his going into intensive care.”

He added: “We’re desperately hoping that Boris can make the speediest possible recovery.”

Boris Johnson was admitted to intensive care on Monday after his COVID-19 symptoms worsened during the afternoon.

The Conservative Party leader ceded control “where necessary” to Foreign Secretary and First Secretary of State Mr Raab, who will deputise for the Prime Minister.

The developments follow repeated questions to Downing Street about how the Prime Minister was ill enough to be allotted a hospital bed but deemed fine to lead the Government. 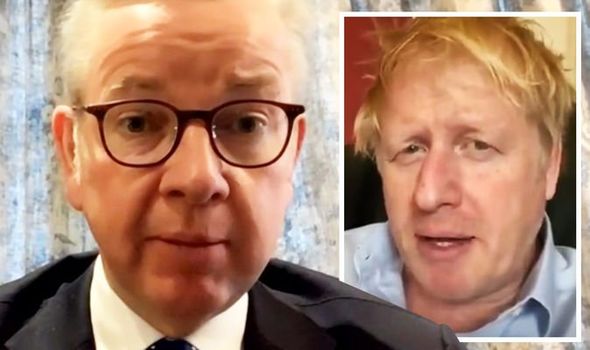 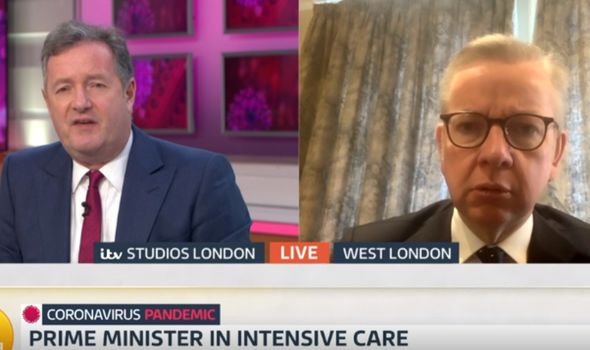 “The person who is running the country, following the plan that the prime minister has set out, is Dominic Raab, the foreign secretary,” Mr Gove said on ITV.

Asked if a decision on changing lockdown restrictions, due to be reviewed on Monday, would be put off, MrGove said: “No it won’t be delayed.

“It will be the case that we will take that decision collectively as a cabinet… the person who will make the final decision is… the Foreign Secretary.”

He has vowed to follow the “direction” set by the Prime Minister for tackling the deadly virus, although admitted at the Number 10 press briefing that the pair last spoke on Saturday.

Mr Johnson was moved to intensive care at about 7pm on Monday and was understood to be conscious but moved as a precaution should he require a ventilator.

The 55-year-old had been admitted to St Thomas’ Hospital in central London on Sunday evening after testing positive for coronavirus 10 days previously.

In a statement recorded after Mr Johnson’s admission, Mr Raab said: “The Government’s business will continue.

A Number 10 spokesman said: “Over the course of this afternoon, the condition of the Prime Minister has worsened and, on the advice of his medical team, he has been moved to the intensive care unit at the hospital.”

The Prime Minister’s official spokesman said on Monday morning that Mr Johnson had been taken to hospital on the advice of his doctor and as a “precaution”, and that it was not an emergency admission.

Downing Street, which had previously described his symptoms as “mild”, switched to describing them as “persistent”.

They included a cough as well as a continuing high temperature, more than a week after he first tested positive.

His move to intensive care came just a few hours after Mr Raab told a press briefing that the PM remained in charge of the Government despite remaining under observation.

Earlier on Monday afternoon, Mr Johnson tweeted: “Last night, on the advice of my doctor, I went into hospital for some routine tests as I’m still experiencing coronavirus symptoms. I’m in good spirits and keeping in touch with my team, as we work together to fight this virus and keep everyone safe.”