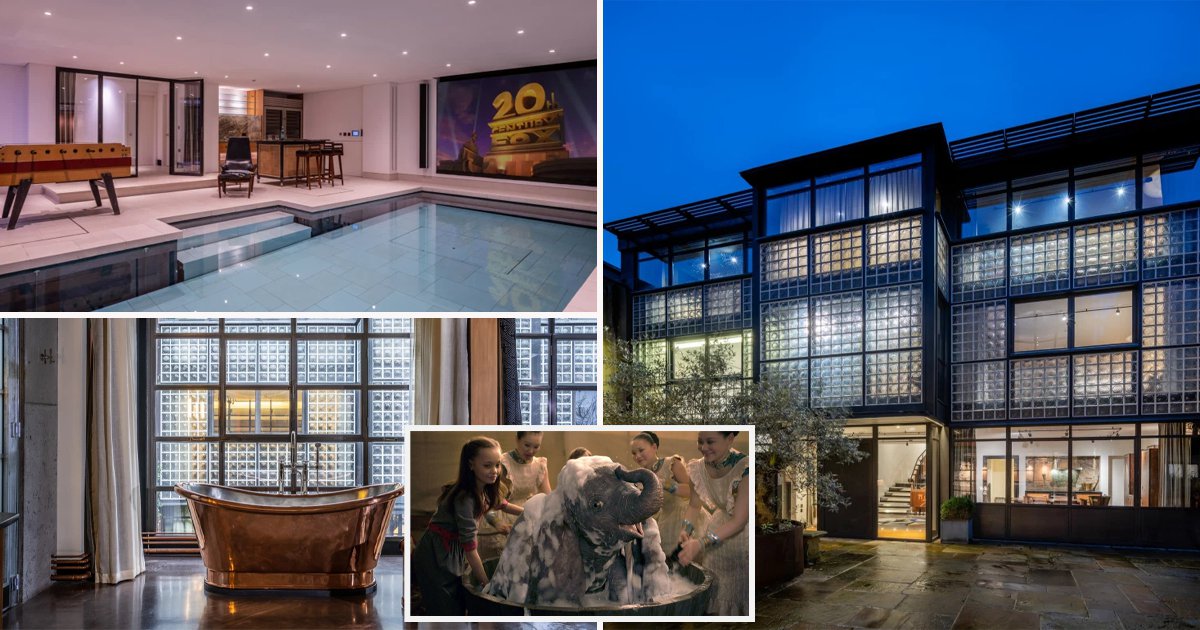 It’s perhaps a delicious irony that the modernist mansion that movie director Tim Burton rented when working on his remake of Disney’s classic film Dumbo, about the loveable elephant, has more than enough room to house the real thing, and a few of his friends.

The extraordinary 13,000sq ft Eglon House, where Burton lived and worked for a few years from 2016, is now on the market for £20million.

Secreted away in a mews in London’s Primrose Hill, the quite remarkable property is on the site of the famous Mayfair Recording Studios.

Burton was first person to occupy the refashioned mansion, housing his creative team in one of the two sensationally crafted buildings and living with his executives in the other.

This monument of steel, glass, concrete and wood took architectural practice Chassay + Last Architects and design house Russell Sage Studio six years to design and build. They have created something quite remarkable.

The East and West wings rise over four floors and face each other across a private cobbled courtyard.

They are interlinked at basement level where there’s a sauna, steam room and a futuristic swimming pool, covered by a mechanical rising floor.

The 10ft-wide LED movie screen on the adjacent wall was specially commissioned and, for over-enthusiastic freestylers, is fully waterproof.

Such care was lavished on every detail by designers here, that even the glass discs, which reflect the prisms of light, were cast using the original moulds for Maison de Verre from a factory in Lille.

The East Wing, where Burton and his team worked on Dumbo, has museum-grade bronze track lighting and the greatest sense of industrial drama.

The first floor (over 2,000sq ft) has been configured as the principal bedroom suite, with a roll-topped copper bath and exquisitely book-matched marble in the en-suite shower and separate loo.

Decadently fabulous, this is industrial design on a lavish scale, far from the tidy and relatively conservative lofts of New York’s Meatpacking District, or London’s Shoreditch.

The West Wing, with its wall of glass blocks overlooking the courtyard, has a more intimate art deco feel, evoking the glamour of the Orient Express.

The sitting room on the ground floor features copies of Chareau’s original sofas and tables, all made in Britain while many of the floors are exquisitely crafted in end-grain pitch pine and hand-cut and laid in tiny pieces in what 200 years ago would have been called ‘oyster-cut’.

It took four months to create the floors alone.

Throughout the property, enormous rugs and huge pieces of contemporary art add atmosphere to what is effectively a palace of raw charm.

The two entrances — one through the cobbled mews, with a bespoke metal gate covered in metallic vine leaves, and the other through an unprepossessing industrial vast black grill gate — add to the sense of history and secrecy of the site.

But then the site itself is full of history. A census map in the mid-19th century showed it served as stables and barns, which were later used in World War I to manufacture shell casings.

It went on to be used by Express Dairies for milk production from the cows who grazed on nearby Primrose Hill till the 1950s.

In the late 1970s it was converted into Mayfair Recording Studios where a host of music legends — including David Bowie, The Clash, Tina Turner, and Pink Floyd — recorded albums.

By the time the current owner, a London property developer, bought it, the vast single building was rundown and had to be demolished. Eglon House, was then born.

Eglon House isn’t just glamorous and good to look at. It’s smart, too. On the top floor, solar PV matting is set into the triple-glazed rooflights, so that it reduces the glare and produces energy.

Russell Sage, who worked throughout the project with the architects, says the real star of the building is its epic scale.

‘It’s incredibly decadent to have double and triple-height ceilings,’ he says. ‘It was wonderful that Tim Burton was the first person to occupy it because he had such an incredible sense of how to use the connecting live/work space.

‘It was wonderful to have the opportunity to work on creating an experience on this property from the road to the house. I have been a designer for 30 years and this project will stay with me forever because of the ability we had to create such an astonishing property.

‘There was a fabulous alignment between the designers and the client who was brave enough to commit such big expense to achieving this level of detail. The project was painstaking. But never painful.’

Primrose Hill High Street is a couple of minutes’ walk away as are local parks and gardens. And if Dumbo did live here, it’s just a short walk to London Zoo.

What you get for your money

Room for an elephant

More than 13,000sq ft of five-bedroom, live-work accommodation and leisure facilities over 13,000sq ft, Eglon House is set across four floors and divided into two wings.

In square footage terms, that’s enough room house a small herd of Dumbos. What they would make of the lifts is another matter altogether, however. There’s also a private central courtyard and parking area.

A combination of floor-to-ceiling windows, or light-reflecting walls of glass bricks.

The original dairy that stood here was converted into the famous Mayfair Recording Studios used by musical greats including David Bowie and Tina Turner.

The indoor swimming pool doubles as a cinema room and sits underground below the outdoor courtyard.

The ten-ft wide LED screen is waterproofed so you can watch Free Willy while you bathe, but a hydraulic floor can be rolled out to cover the pool, if you fancy an altogether drier affair. There’s also a sauna and steam room and cocktail bar. Bottoms up.

The master bedroom suite offers a whopping 2,000sq ft of space, with a bedroom, dressing room, and living room. There are four further bedrooms, each with en-suite.

A gratifying mix of industrial edginess and elegant British craftsmanship, Eglon House has ‘oyster-cut’ floors and bespoke detailing including the feature staircase made from pitch-pine and grout mixed with Portland stone.