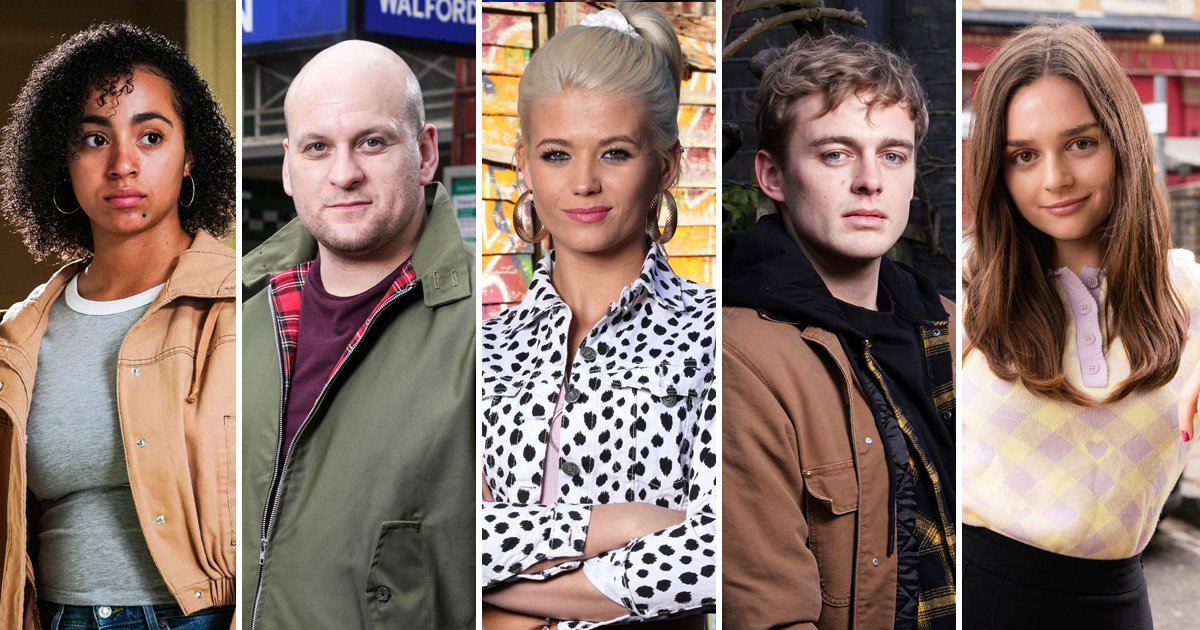 EastEnders is about to have a huge cast clearout, Metro.co.uk can reveal.

In a major shake-up executed by new boss Chris Clenshaw, five characters are confirmed to be leaving.

Among those written out are Ricky Champ, who plays Stuart Highway. The character is currently in the midst of a post-natal depression storyline, which is causing him to be unable to look after Roland.

He and wife Rainie (Tanya Franks) had tried for a child for a long time, but following Stuart’s diagnosis with breast cancer, his mental health took a significant downturn.

This has left the couple in a crisis, with Rainie’s dream of being a mum turning into a nightmare as she could be set to lose everything.

Metro.co.uk understands that Ricky will film his final scenes later in the year.

However, in the summer, three more faces are going to say goodbye, with one having already filmed their final scenes.

Dana Monroe (Barbara Smith) and Peter Beale (Dayle Hudson) will be bowing out in a dramatic storyline which looks likely to be connected to upcoming scenes where they share a kiss.

Barbara recently hinted to Metro.co.uk that Dana and Peter’s attraction would go further, saying: ‘I think he’s going to keep pursuing that but also, if Peter rejects Dana, I think she’ll still have feelings for him.

‘Tensions will continue to rise and I think that’ll cause some friction, maybe some other stuff!’

She added: ‘I think Chris has come in and he’s definitely making his mark, there’s a definite exciting Summer ahead!’

With Peter and Dana offering one another mutual support, Bobby (Clay Milner Russell) is set to be hurt when they get close; as he is hoping for a reunion with his ex.

It remains to be seen whether Dana and Peter leave together or if Dana turns her back on both brothers and heads for uni, but it will certainly dash Bobby’s pursuit of love.

Kelsey Calladine-Smith, who plays Jada Lennox, is also leaving the show and has recently had turbulent times when she accused Zack Hudson (James Farrar) of making a move on her.

The close friend of Dennis Rickman, and mother of his child Alyssa, it seems like Jada will have outstayed her welcome with the family.

It is unconfirmed exactly how the four characters will leave and whether the door will be left open but a dramatic summer is being promised – along with some new faces.

An EastEnders insider told Metro.co.uk: ‘Whenever a new boss comes in there’s always going to be big changes and it’s no different with Chris.

‘He’s been working hard behind the scenes since January and is really planning to shake things up which means saying goodbye to some characters.’

They continued: ‘It’s nothing personal to any of the cast going, it’s simply a creative decision – for big storylines to happen you have to say goodbye people, that’s the nature of soap.

‘Chris has some really big stories planned and viewers will see his stuff starting to air over the summer.

‘He’s really keen to take the show back to its roots, build up the clans again with some big explosive long running stories. It’s an exciting time to be on the show.’

It was recently announced that a new family has been cast around Mitch Baker (Roger Griffiths), with his brother and two nephews making their debut soon.

Newcomers Matthew Morrison and Ashley Byam, who play newcomers Felix and Finley have already commenced filming alongside Omar Lye-Fook MBE as Avery, and the family are tipped to be central to an unfolding plot in the coming months.

In other exits, Danielle Harold is set to leave the show, with Lola Pearce being killed off in a blockbuster twist.

And Danny Dyer previously quit the show as Mick Carter – his exit remains shrouded in mystery but we understand that he is not being killed off.

‘I’ve been contemplating a while now about whether time to roll the dice, take the leap’, he explained during an episode of podcast Sorted with the Dyers.

‘The news is that I’ve not decided to renew my contract, that’s all, it’s not because I’ve fell out with anybody, that job has been amazing for me.

‘I love everybody, it’s an important part of television.’

He later promised that his final storyline would be ‘explosive and epic’.