WITH millions of Instagram followers, lucrative brand endorsements and their own beauty lines, some of Love Island's biggest names are now raking in a fortune.

But the likes of Chris Taylor, Zara McDermott and other stars could net an enviable salary even WITHOUT their fame – thanks to their secret skill sets and qualifications. 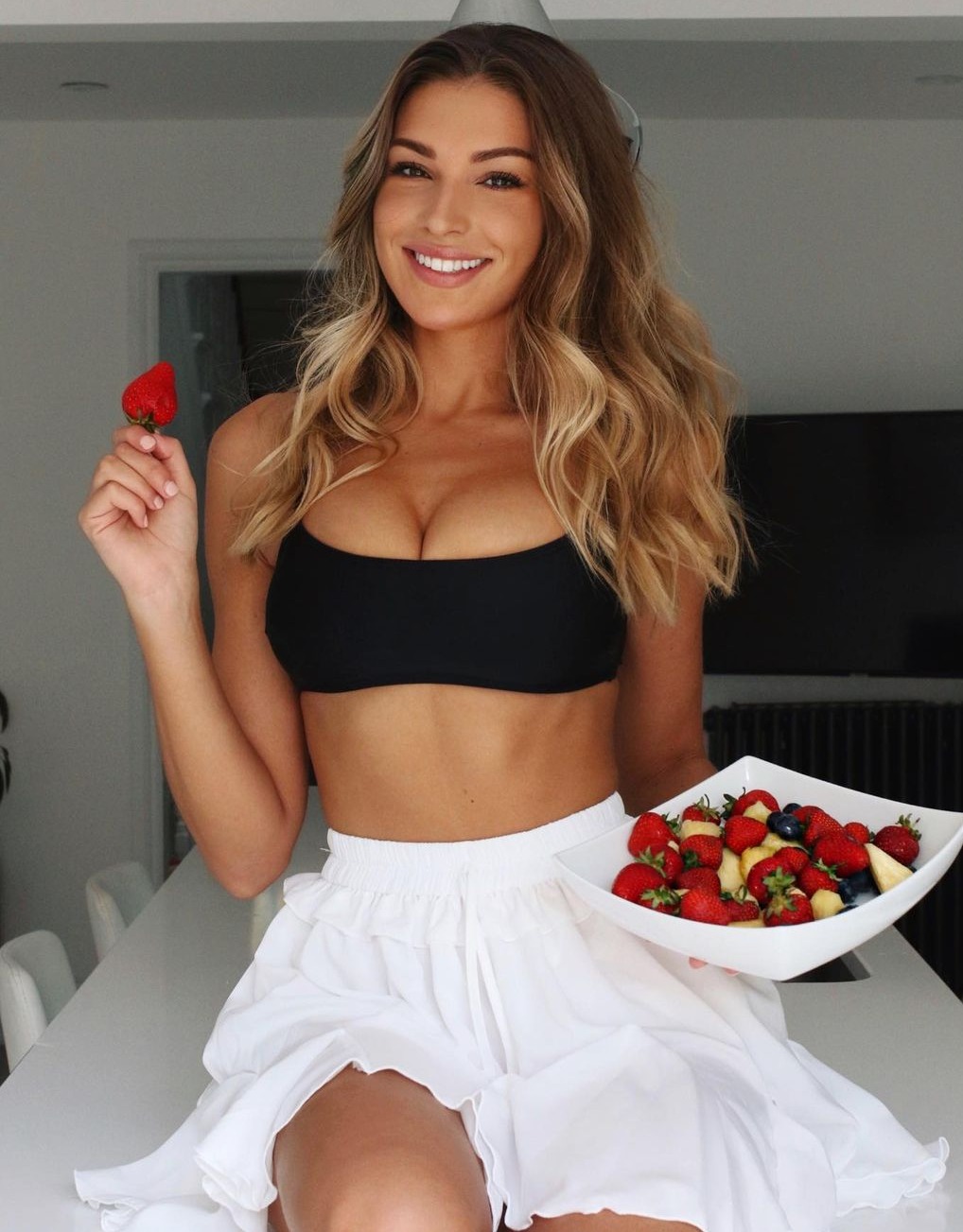 Researchers at The Knowledge Academy have mocked up CVs for show favourites, and worked out how much they could earn per year in roles like PE teachers and pharmacists.

While business whiz Chris, 29, ranked highest with a predicted salary of £63,000 if he wasn’t famous, Zara, Anna Vakili and Tommy Fury also made the top five.

But the curriculum vitaes of some stars – including mega-influencer Molly-Mae Hague – could see them make less than the average UK salary, according to the research.

Talveer Sandhu, business director at The Knowledge Academy, tells The Sun Online: "Reality stars are raking in a fortune from their newfound fame on social media – especially in this digital age we find ourselves in. 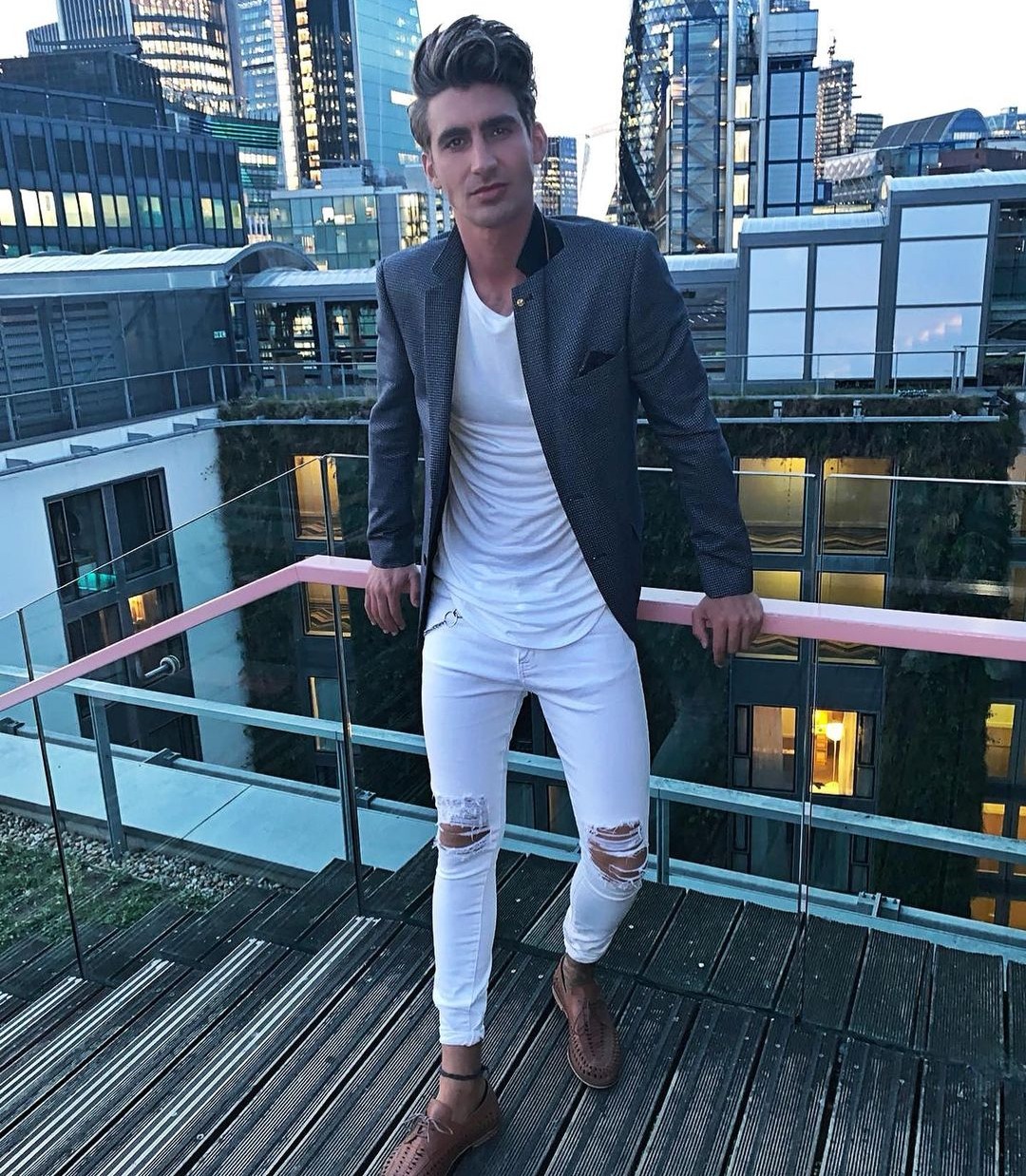 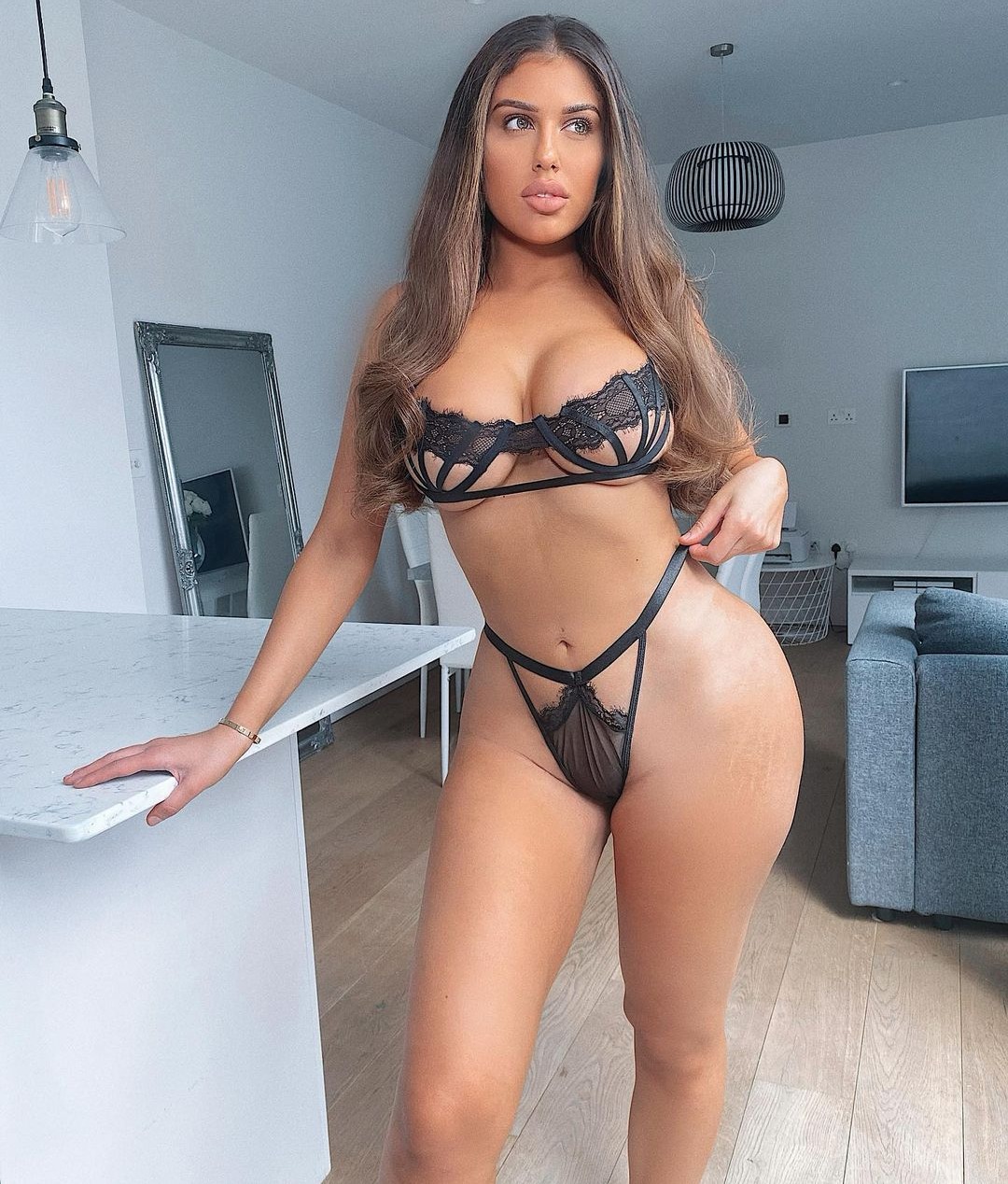 "However, as our research shows, some of them could also earn themselves a more than decent living owing to their skills and experience before entering the villa."

Researchers used Adzuna's CV value tool to work out the stars' estimated annual salaries without their fame and fortune, as well as the careers best suited to them.

Here, we reveal which former Love Islanders' CVs are worth the most: 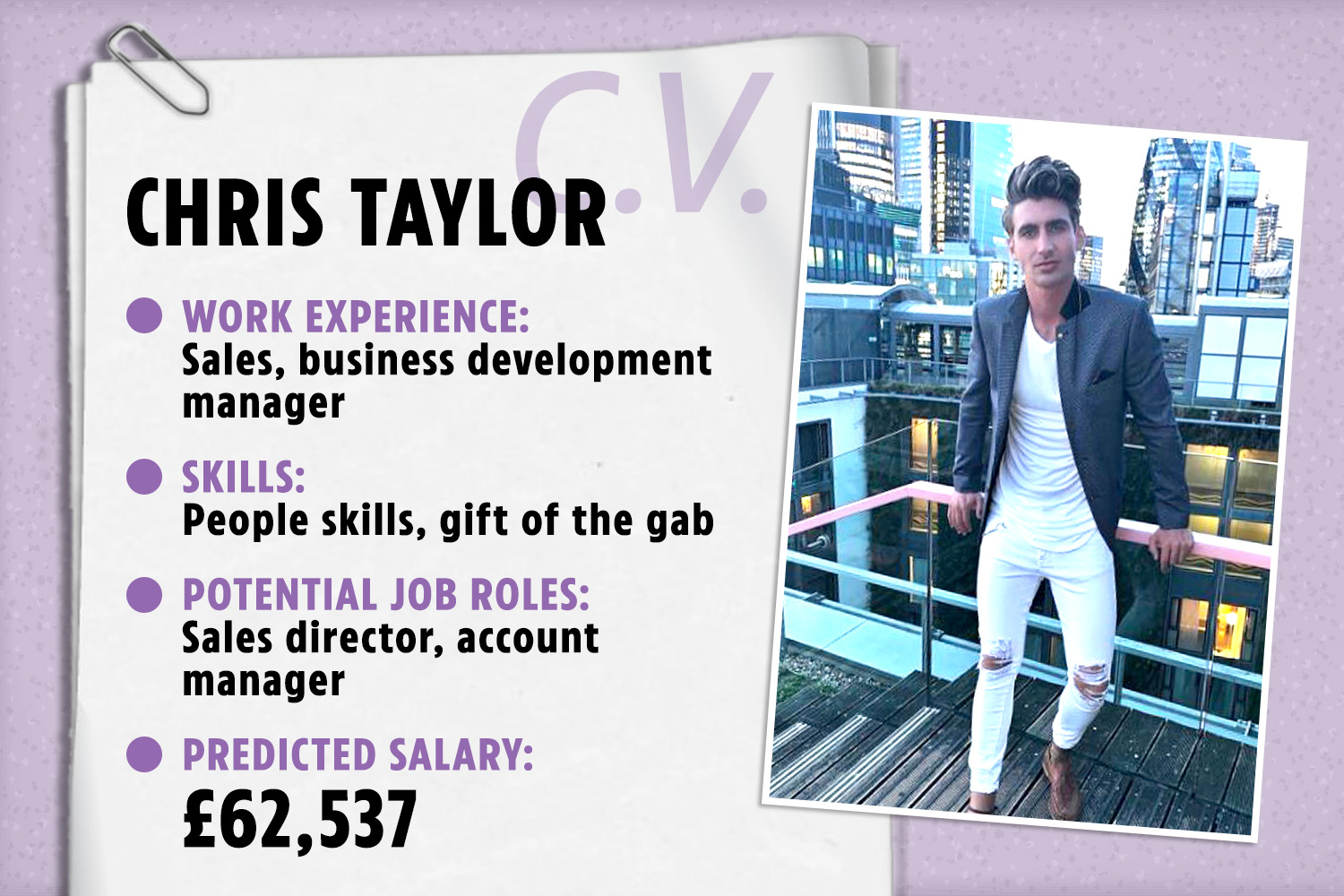 Love Island hunk and Instagram influencer Chris has credited his job as a business development manager for helping him with the ladies.

“I've been in sales for most of my life so I’m used to backing myself and fully explaining what I’m doing and how I’m doing it,” he said.

The dishy salesman, who has a 2:1 degree in Criminology and Psychology, rated himself “the full package” before entering the villa in 2019.

Speaking about his best and worst traits, he said: “I am confident, I have good banter, and I’m loving. I can be quite fiery, a bit stubborn and sometimes I can come across as a bit too hard to get.” 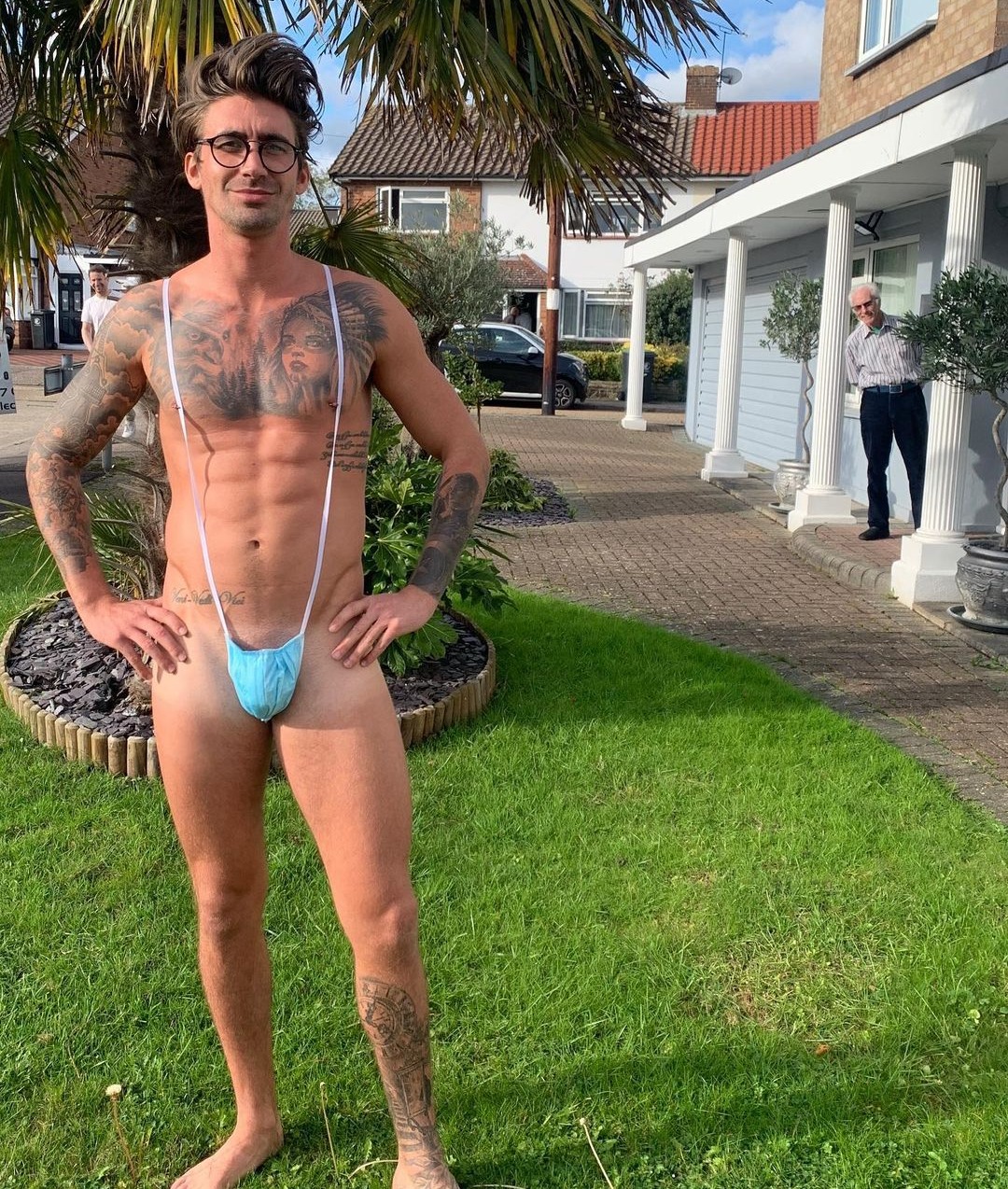 With a huge 1.1million Instagram followers, it's not clear how much of his time is currently spent working as an influencer over his business role.

But researchers say he could net an annual salary of £62,537 thanks to his people skills, work experience, qualifications and gift of the gab. 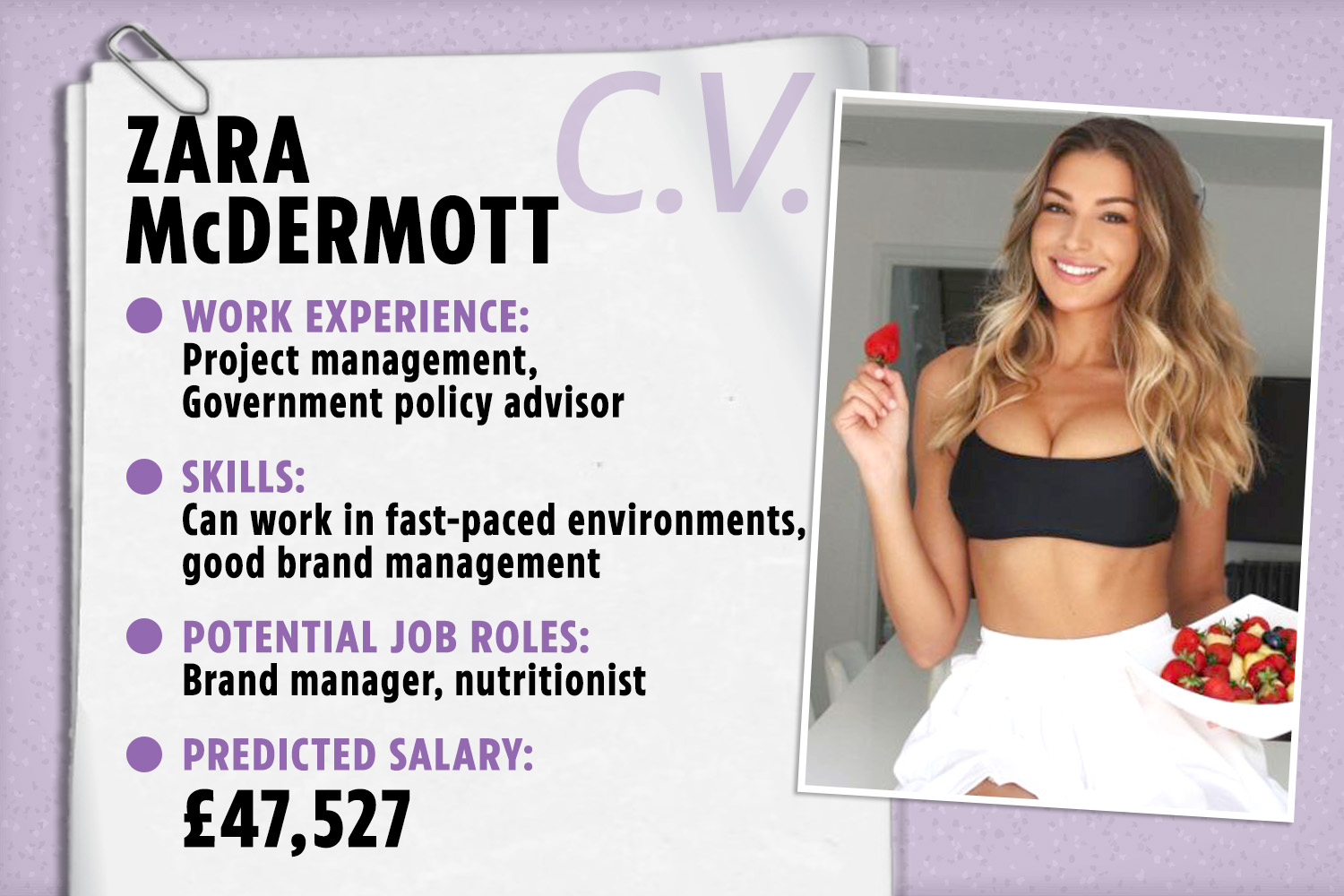 Before shooting to stardom on Love Island's 2018 series, Zara had a high-flying job as a policy advisor for the Department for Education.

She previously told ITV’s Loose Women: "We create regulations and policy, and essentially laws in a sense, we write legislation and stuff."

The villa stunner – who took a 'career break' to join the hit show – also formerly worked for the Department of Energy and Climate Change.

And she modelled as a teen, according to her LinkedIn page. 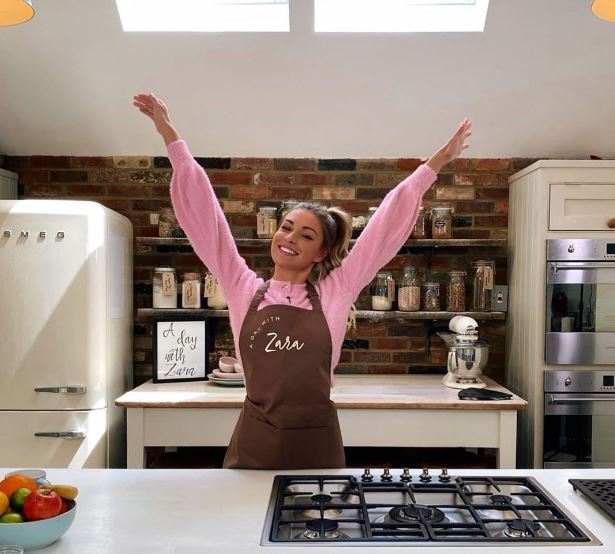 Today, Zara, who can speak Spanish, has founded her own recipe and nutrition brand, A Day With Zara, which has 110,000 Instagram followers.

The 24-year-old says food "has always been a huge passion" of hers.

Thanks to her previous jobs and experience of working in fast-paced, high-pressure environments, researchers say Zara could net a lucrative role in project management, or become a brand manager (83 per cent match).

She could also think about becoming a nutritionist (77 per cent match).

"Zara has enviable experience working in government and was set to climb the ladder in a hugely respected profession," Talveer tells us. 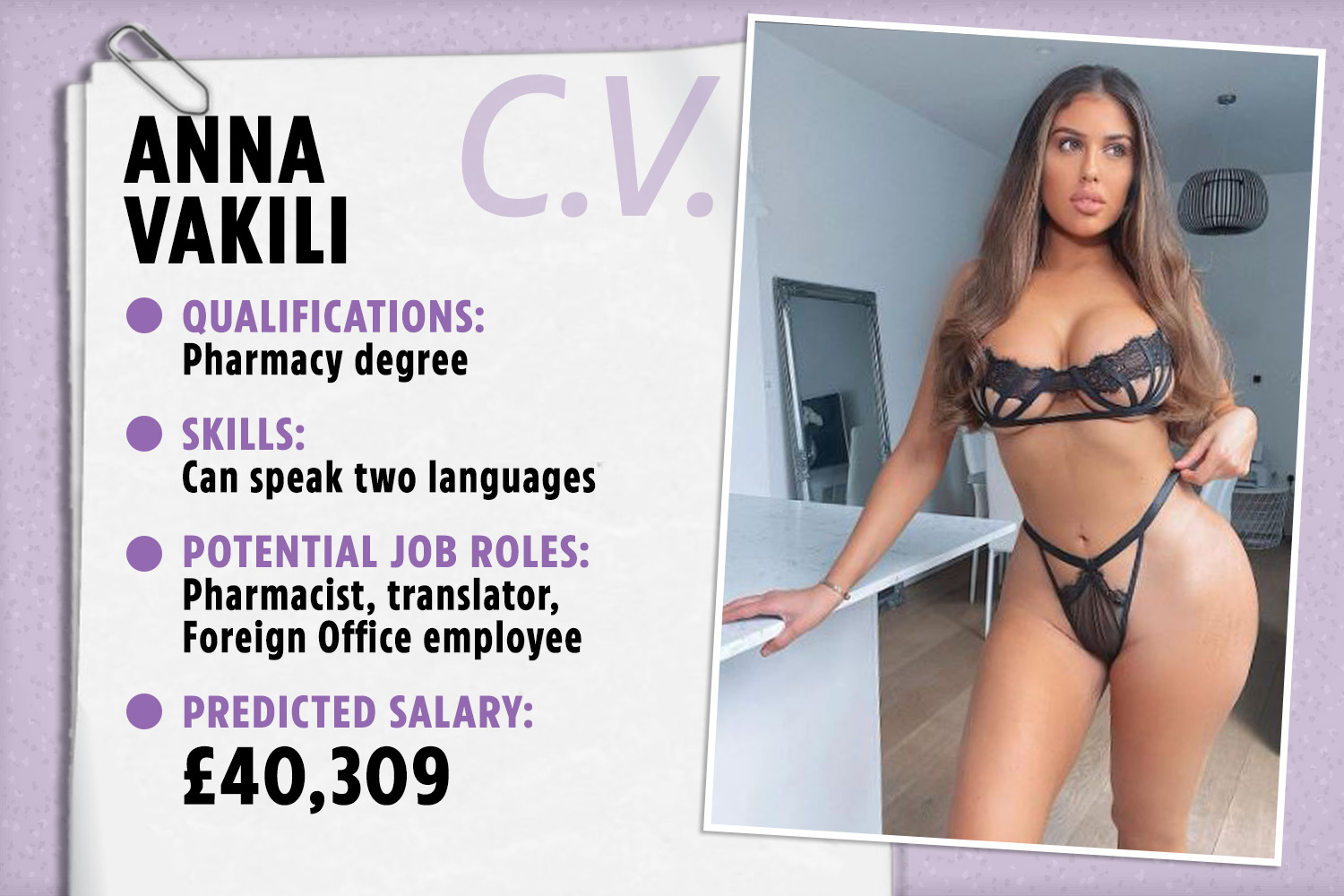 Londoner Anna worked as a pharmacist before joining Love Island in 2019.

Ahead of her appearance on the dating show, she described herself as kind, honest and emotional – but admitted that she was "difficult to handle".

"I’m a drama queen and I overreact," she added.

As well as having a degree in Pharmacy, Anna, who grew up in a family with a Middle Eastern background, can speak Persian.

Research has shown that if you speak more than one language you could earn anything from eight to 20 per cent more in your job. 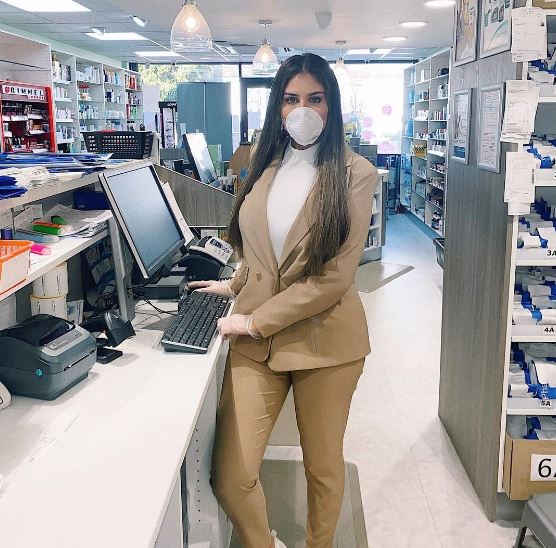 Last year, the selfless star returned to work as a pharmacist to help in the fight against coronavirus – nearly 12 months after leaving the villa.

She told her fans: “Wasn’t really planning on registering yet but with everything that’s going on it felt wrong not to. We can all fight this together.

According to Adzuna's CV value tool, Anna could earn more than £40,000 a year without her fame. 'Compatible' jobs were found to include a translator (44 per cent match) and a Foreign Office worker (38 per cent match). 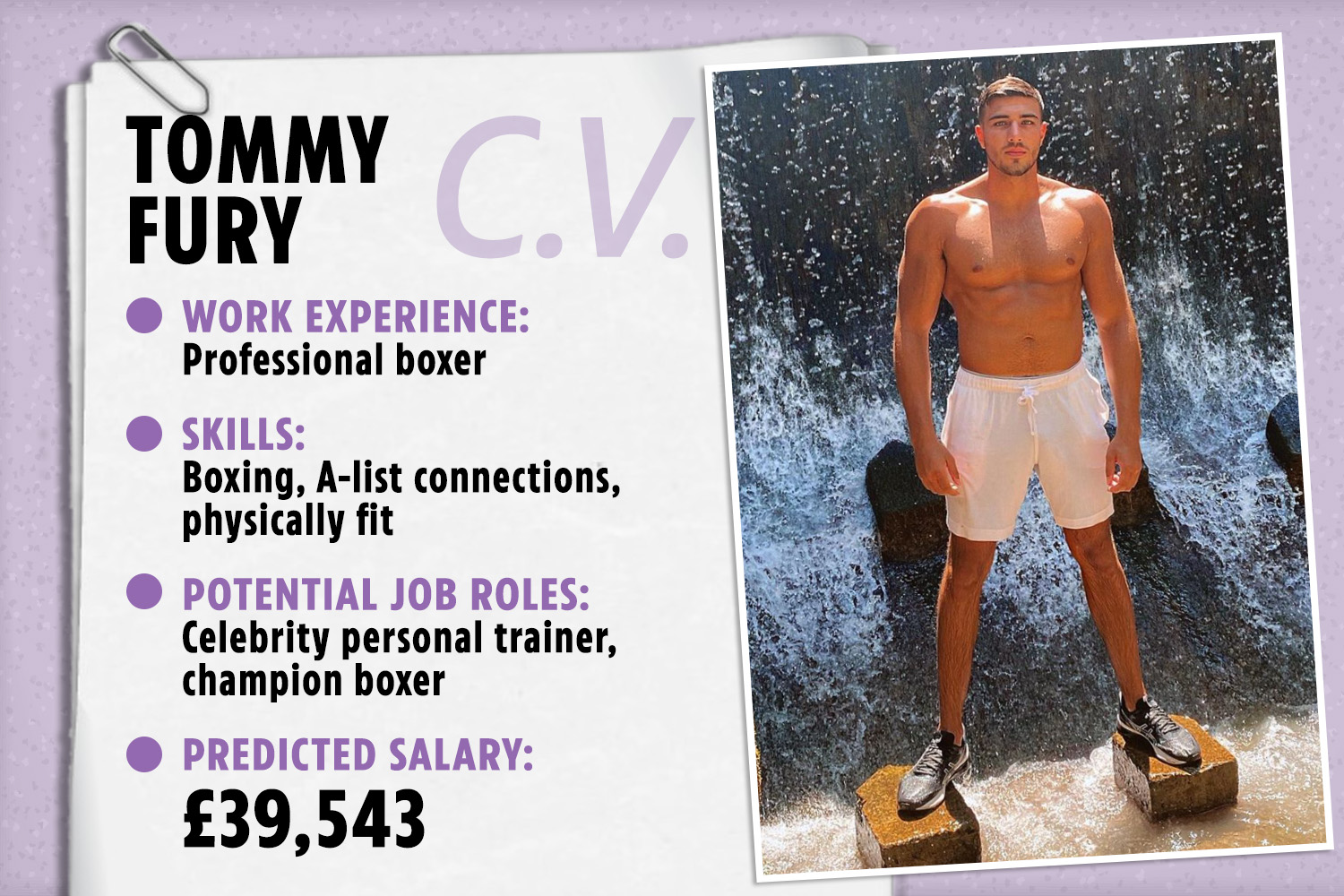 He reportedly dropped out of school in Year Nine, with no qualifications to his name. Yet skilled boxer Tommy Fury still makes it into the top four.

Tommy, who is dating "soulmate" and fellow former Islander Molly-Mae Hague, could earn £39,543 a year in the 'real world', research suggests.

The hunk has already proved himself as a professional boxer – and could fight as many as FIVE times this year, with a plan to return in February. 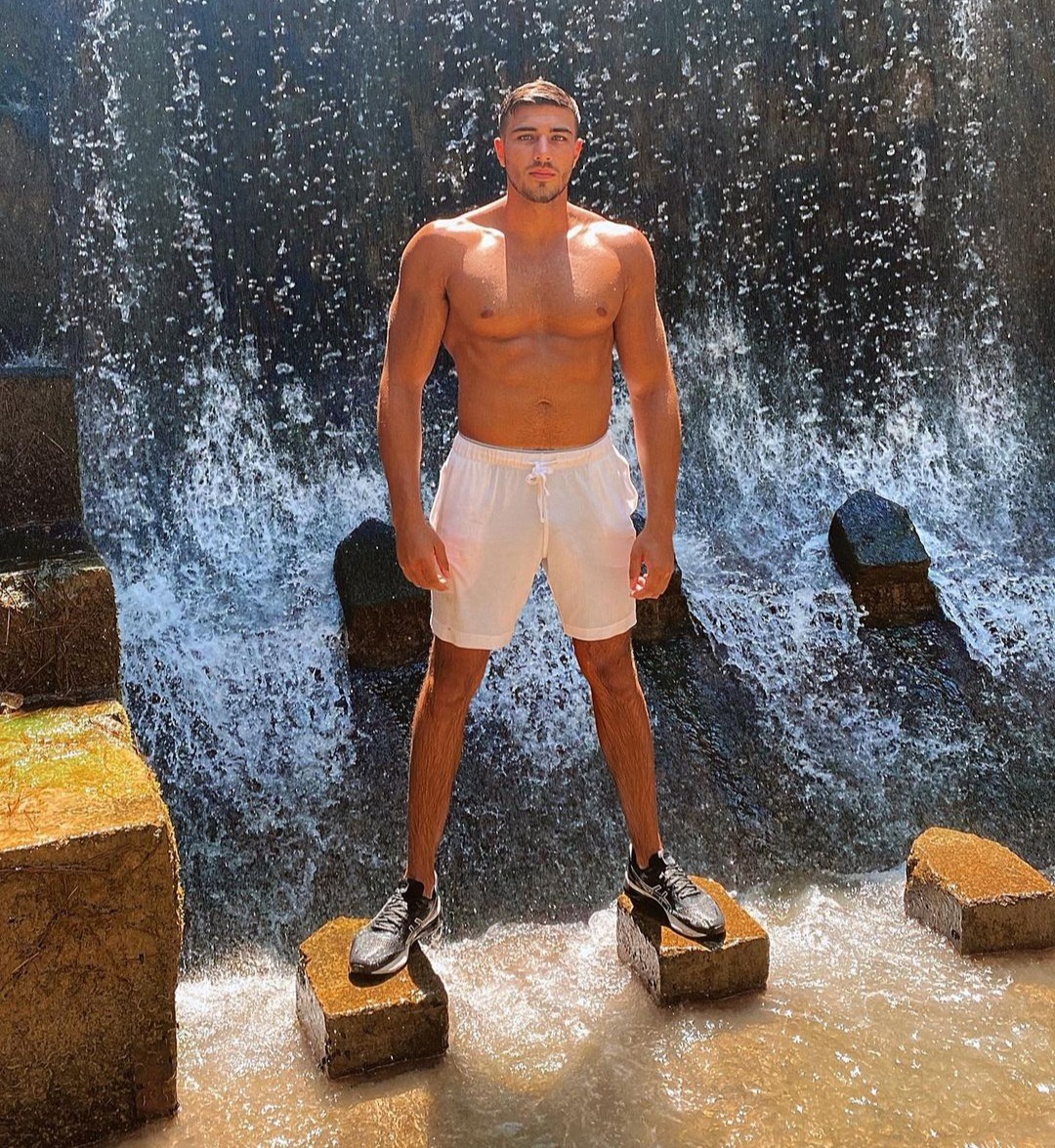 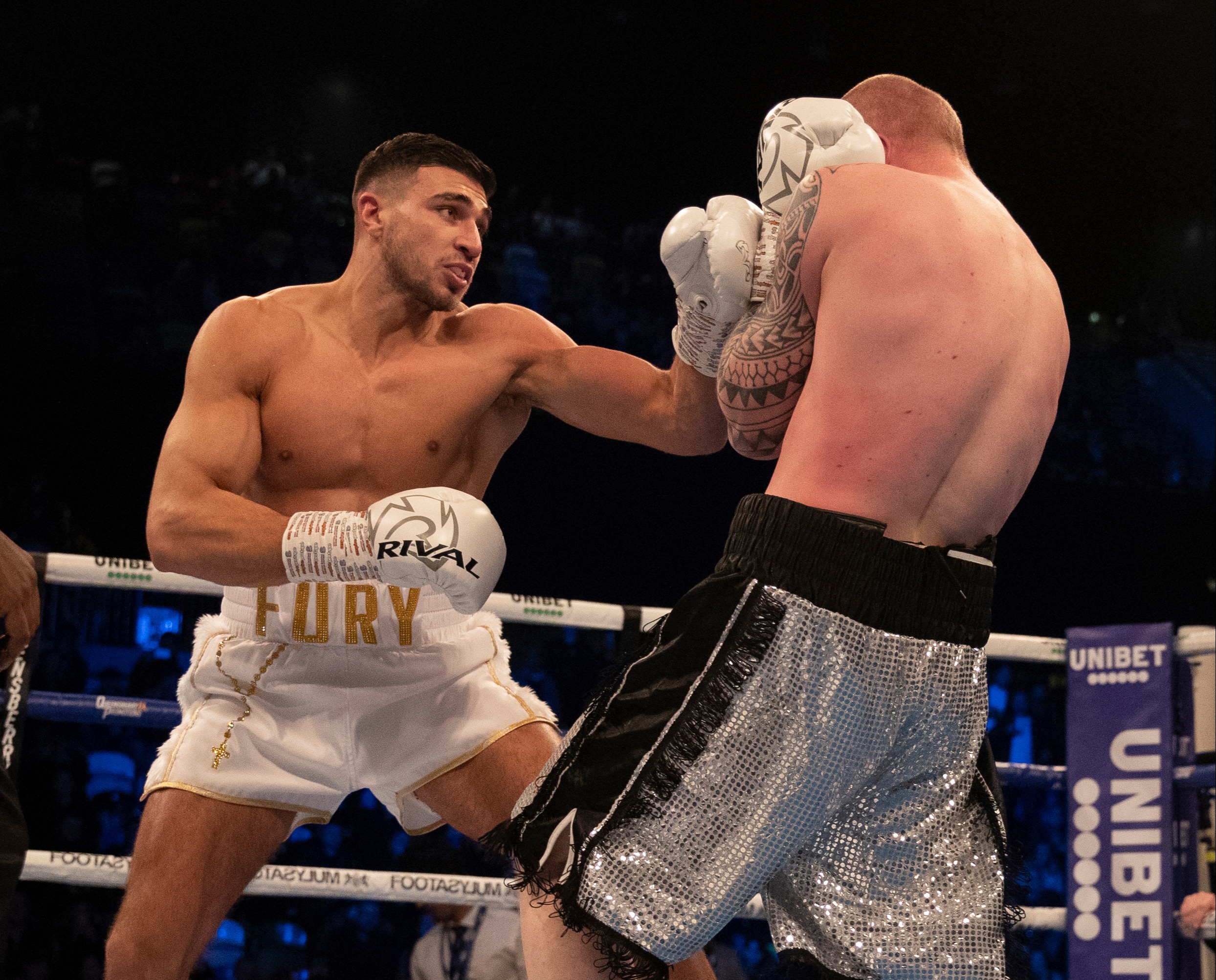 But, based on his physical fitness, the analysis shows Tommy could also make a great personal trainer (67 per cent match), if he wished to do so.

With his world champion brother Tyson’s celebrity connections, he could even be a PT to the stars – which could net him an even higher salary.

However, Tommy doesn't exactly need the cash. Already a millionaire at just 21, he's banking nearly £3,000 per day in profits at his own companies. 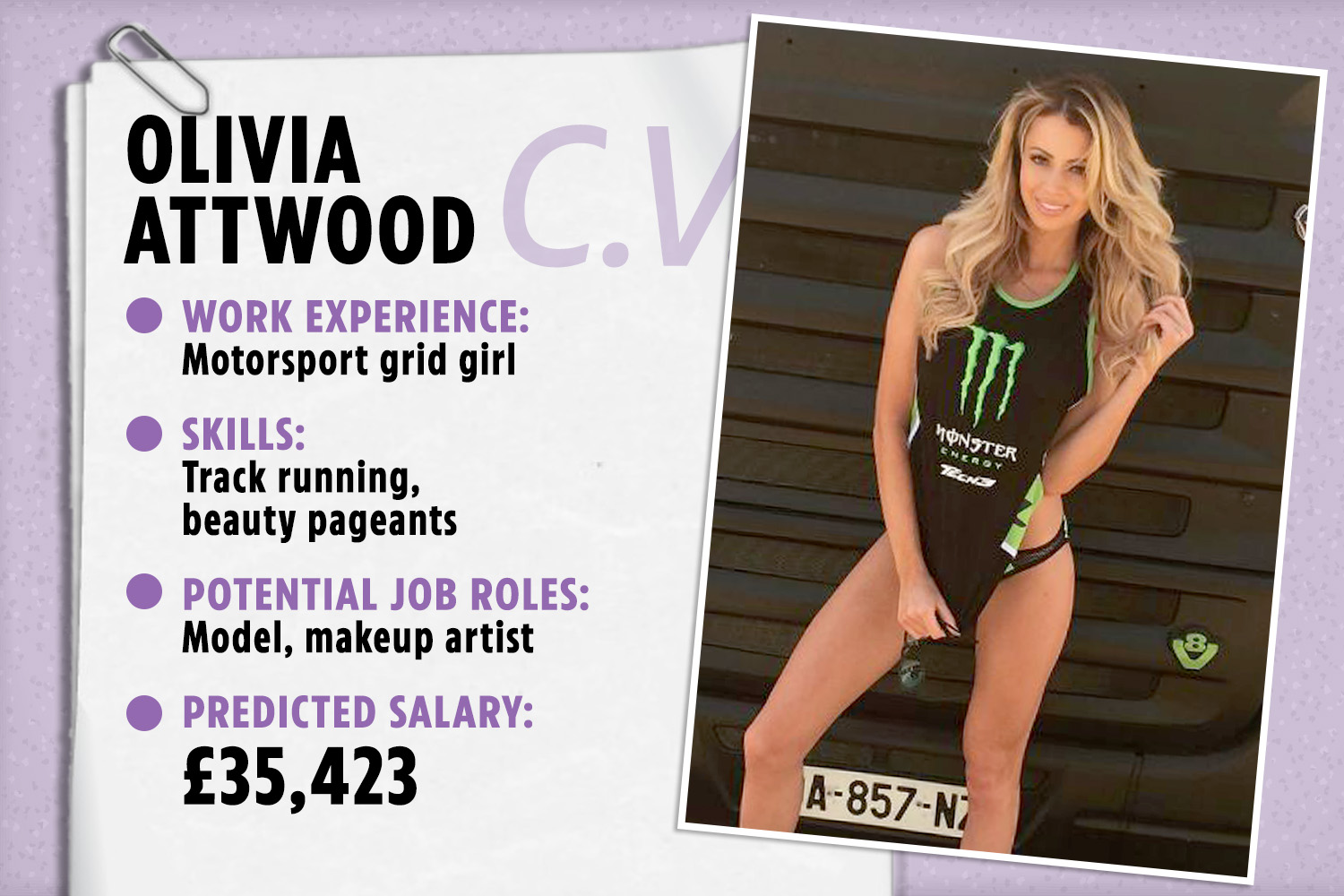 Like many former Islanders, Olivia Attwood is no stranger to modelling.

Before joining the show in 2017, she competed in beauty pageants, including representing London at Las Vegas's Tropic Beauty contest.

She was also a Motorsport grid girl.

Olivia, who excelled at track running as a youngster, previously admitted she went on Love Island for the "experience" rather than to find love.

"I don't think anyone ever goes on Love Island for love. Anyone who tries to claim they do is weird, it's just like embarrassing," she told Female First.

"Like, come on, there are easier ways to meet someone. I went on for the experience, not thinking I was going to meet my husband."

She added: "Now, when people go in, they know what's up for grabs, but we had no idea how big it was until we left." 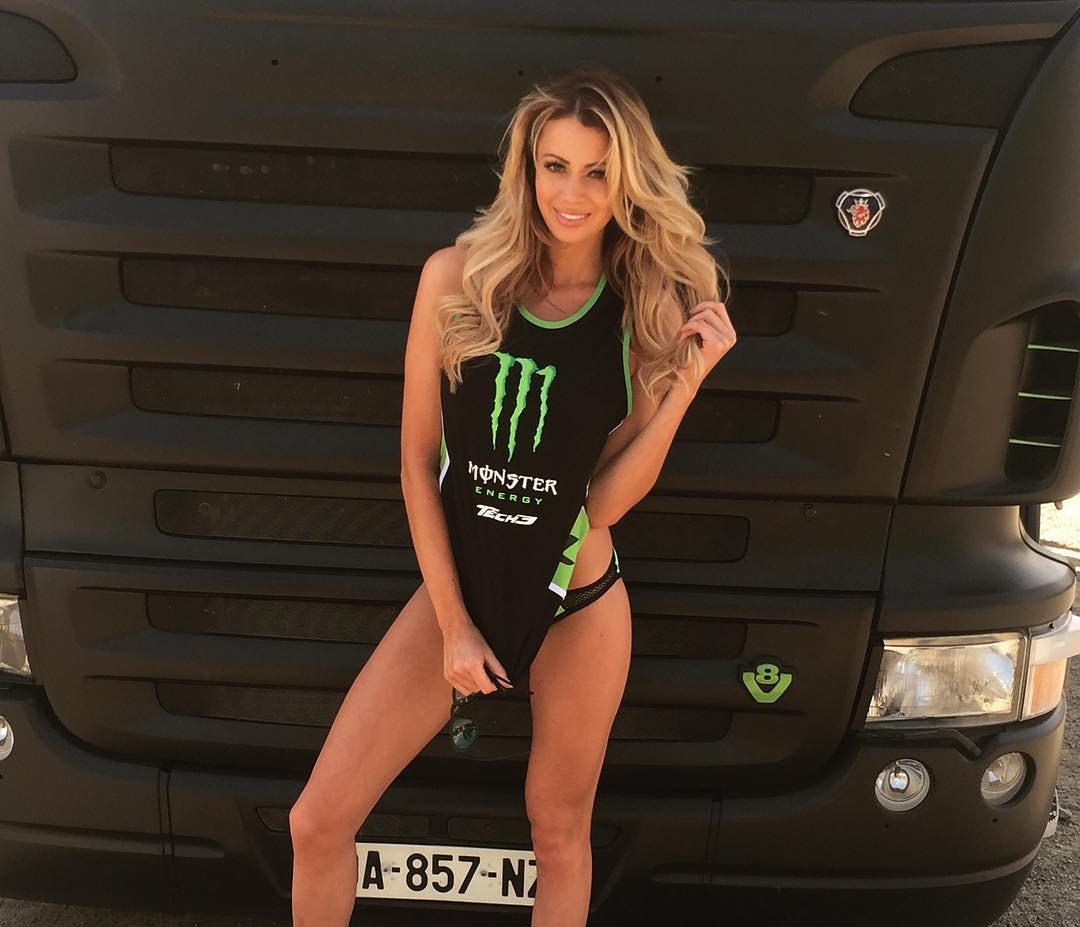 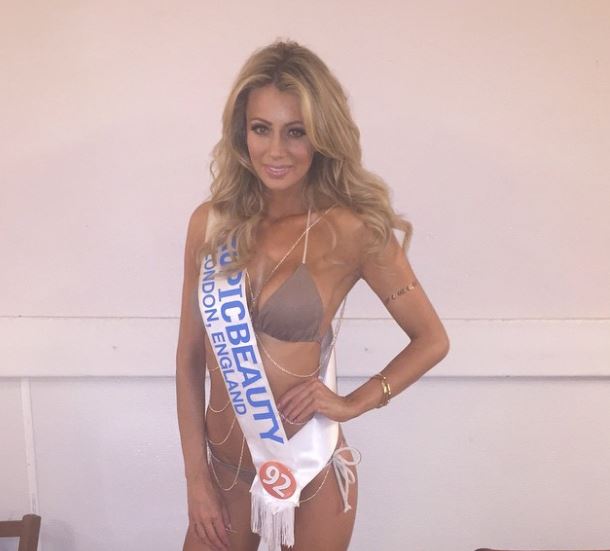 And in an interview, she spoke about her own makeup routine.

"I’ve been doing it for so many years now," said the influencer, who now boasts 1.9million Instagram followers and an estimated £1.2million fortune. 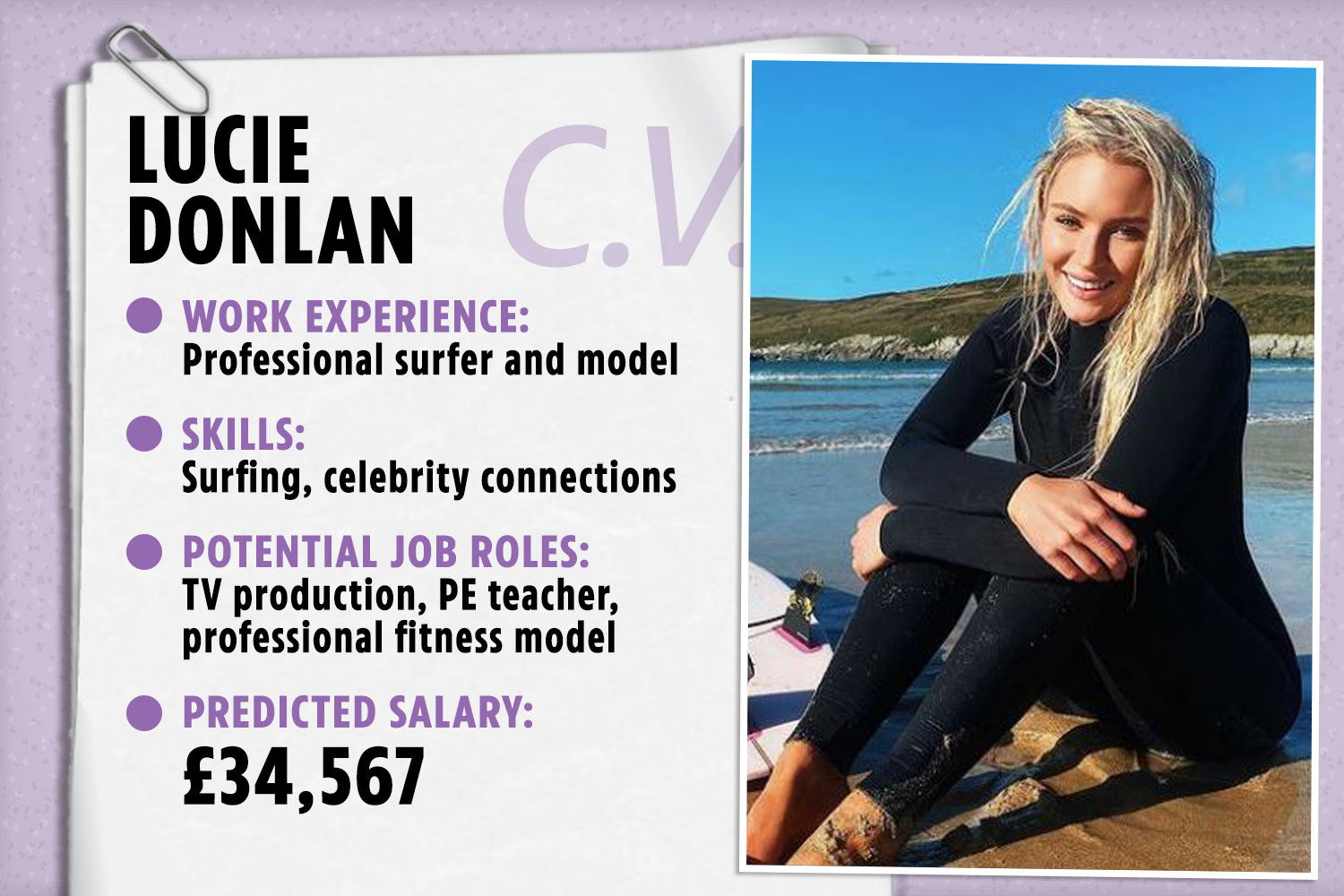 But Lucie Donlan could also land work as a PE teacher – thanks to her professional surfing and fitness background, the analysis claims.

The 22-year-old surfer babe – who was pals with Joey Essex even before entering the villa – also boasts some impressive celebrity connections. 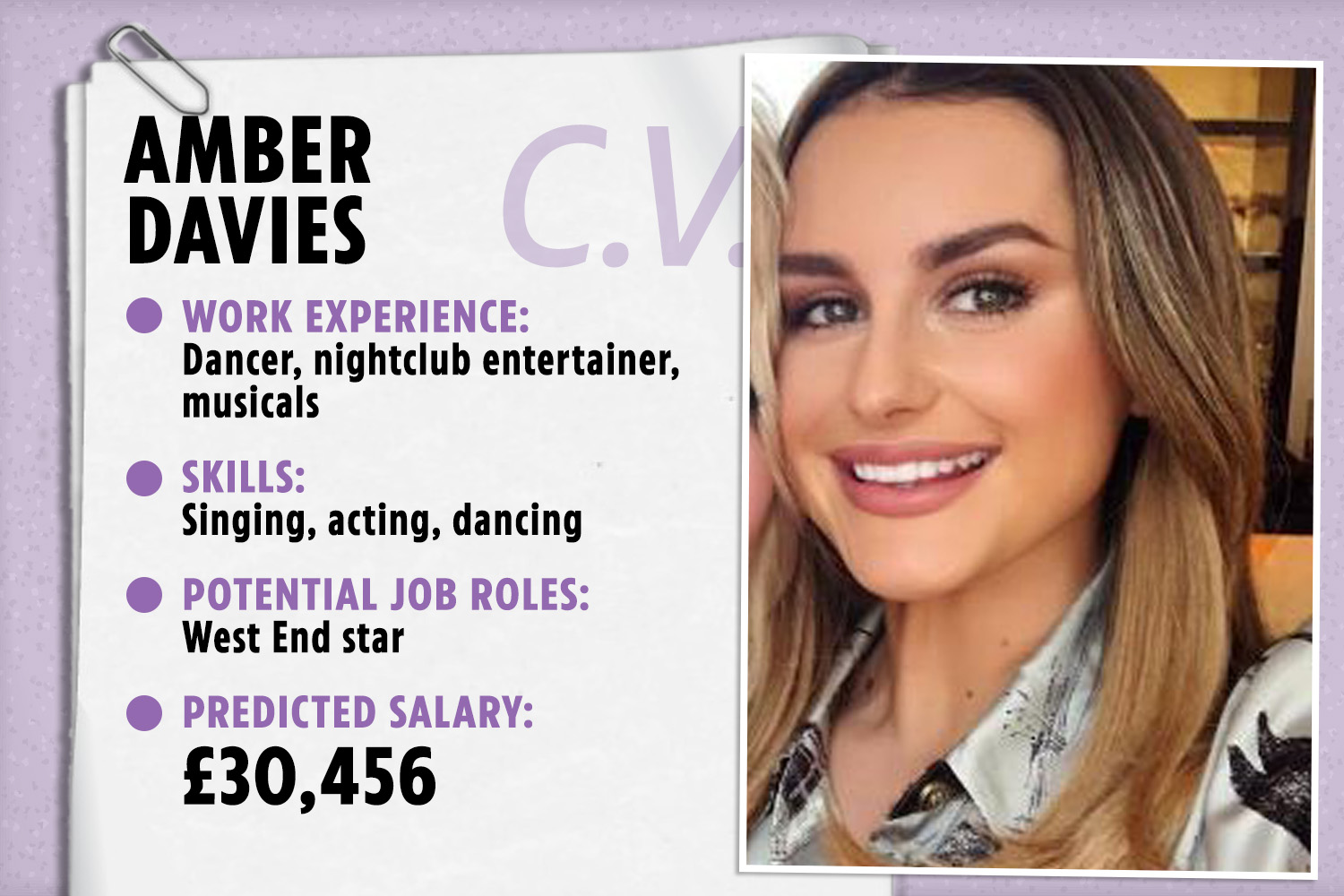 Performing arts academy grad Amber Davies is no stranger to the stage.

The 22-year-old – who is skilled at singing, dancing and acting – could make a great West End star (88 per cent match), according to the research.

And she's proved this already – after stunning audiences with her "incredible" voice as Judy Bernly in Dolly Parton's hit musical 9 to 5. 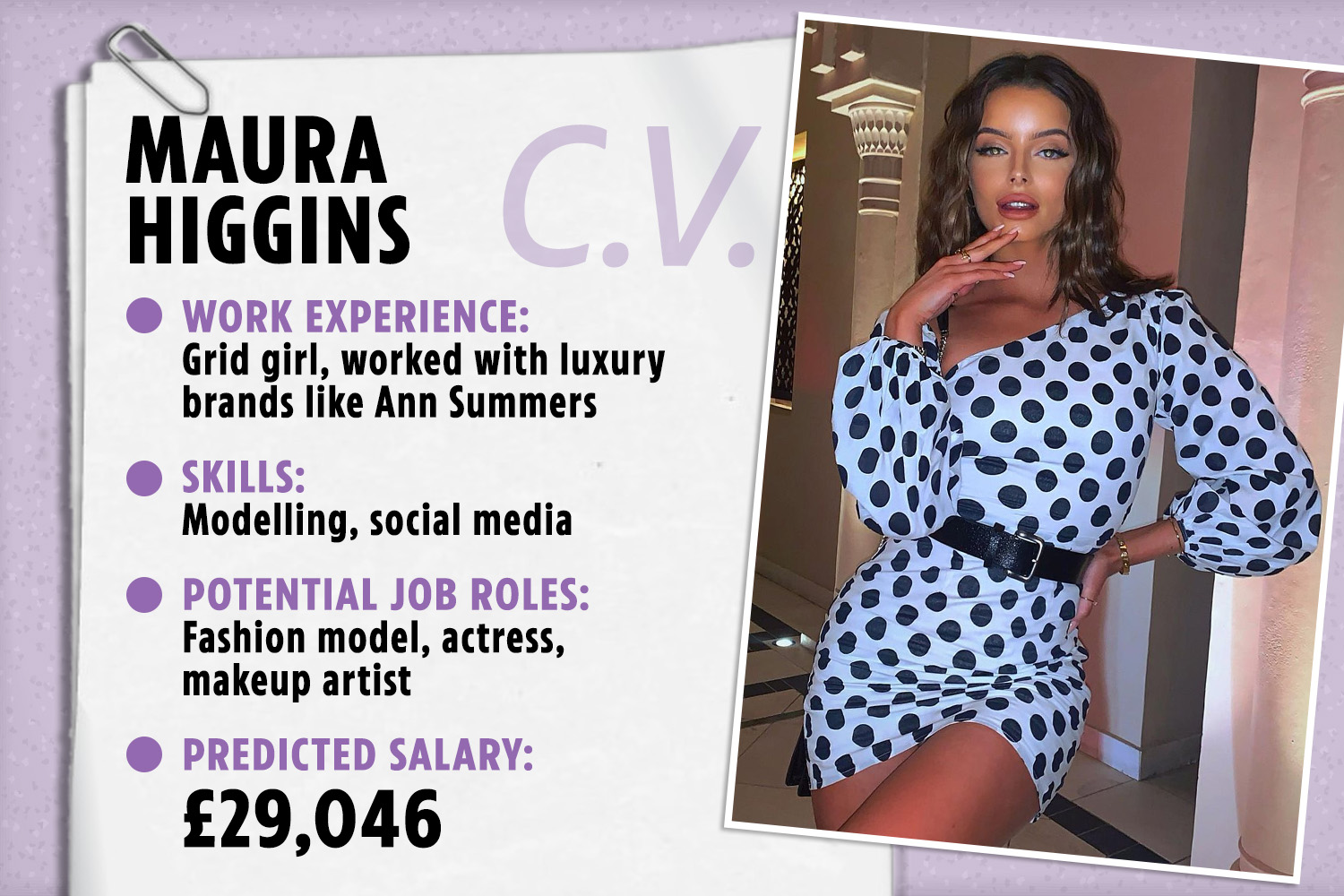 And researchers agree Maura, 30, is suited to a career as a fashion model (53 per cent match) thanks to her skills and past work experience.

The beauty could also be an actress (59 per cent match) or a makeup artist (79 per cent), having launched her own make-up range with Inglot. 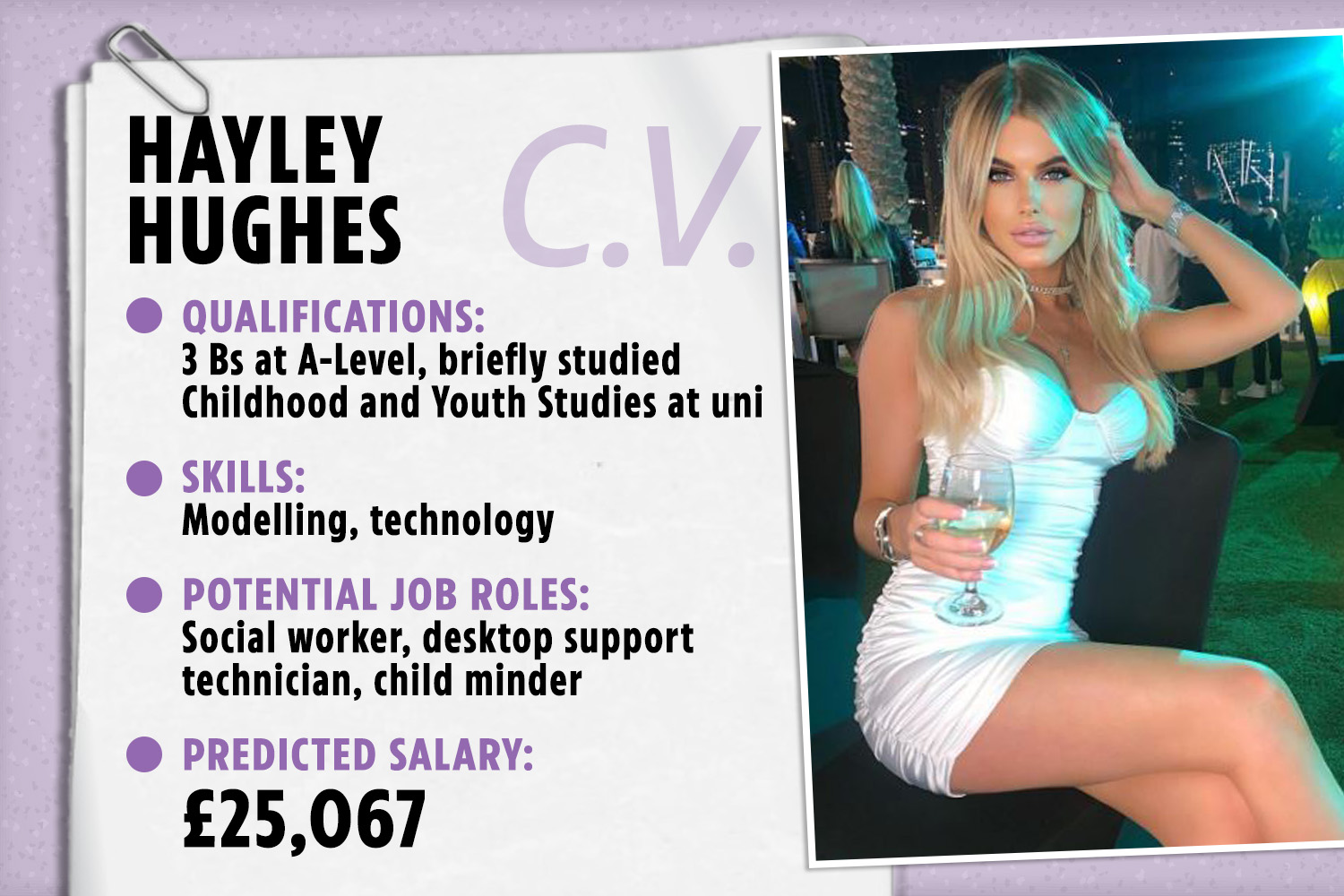 Hayley Hughes hit the headlines for not knowing what Brexit was during her 2018 appearance on Love Island – yet she was smart at school.

She achieved at least three Bs at A-Level in ICT, Science and Health and Social Care, later studying Childhood and Youth Studies at university.

With her skills, the analysis suggests Hayley could net £25,067 in roles such as a social worker, a desktop support technician, or a child minder. 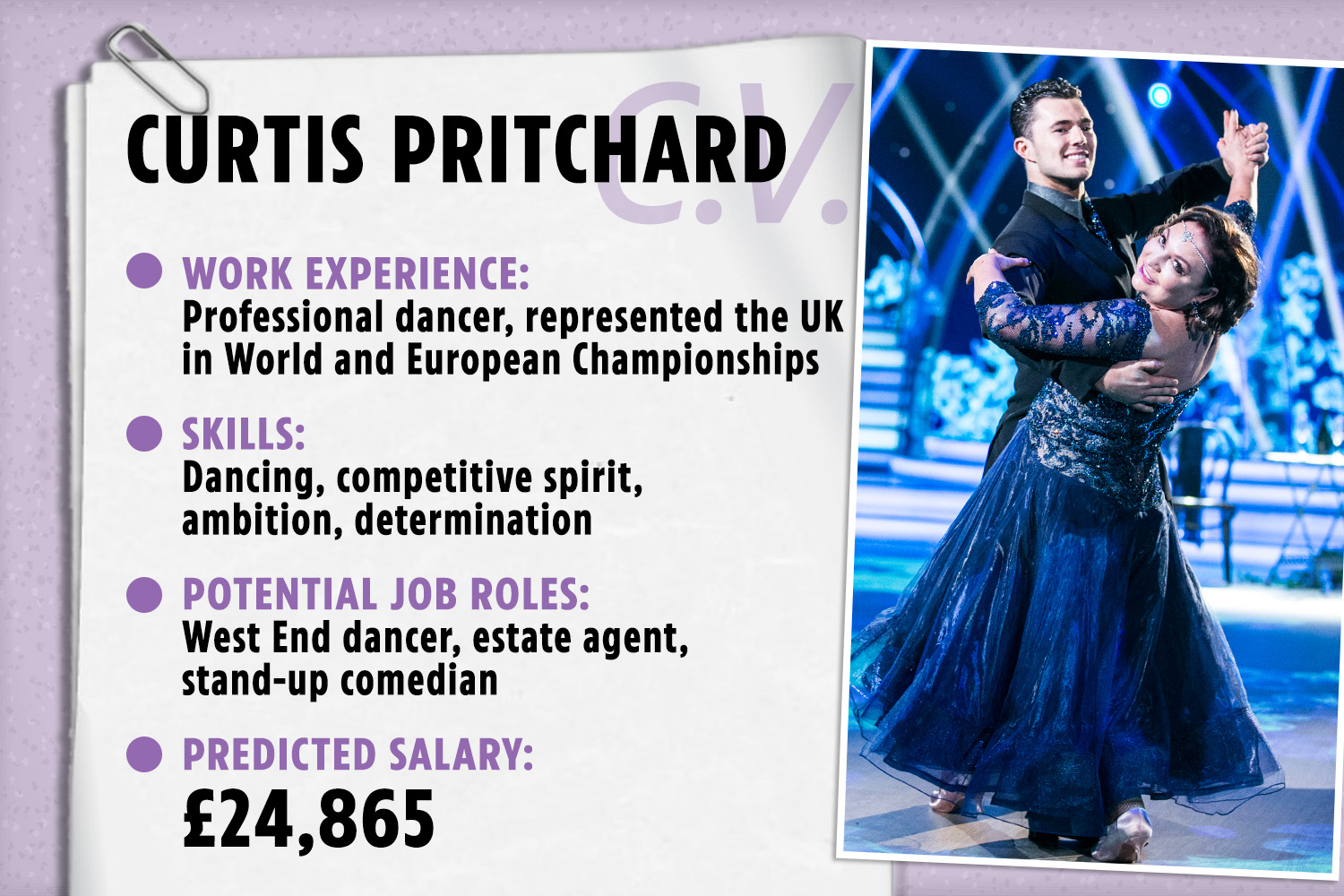 Ex-Islander Curtis Pritchard started dancing at a young age alongside his famous big brother AJ, who appeared on I'm A Celebrity last year.

The star, now 24, began to dance professionally from the age of 11, and has represented the UK in several World and European Championships.

His competitive spirit, ambition and determination could stand him in good stead to be a West End dancer (54 per cent match), researchers say.

He would also be suited to a career as an estate agent or a comedian. 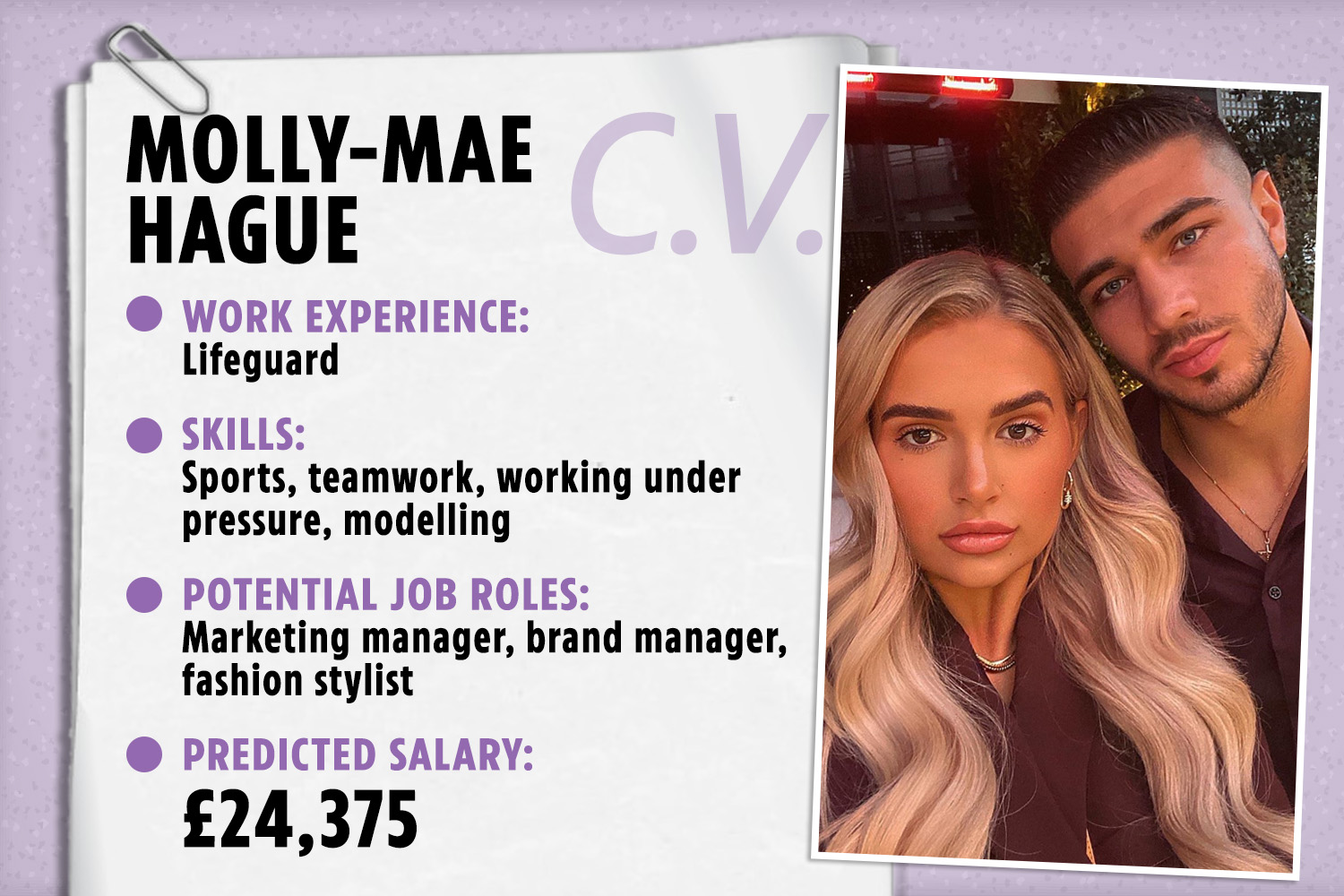 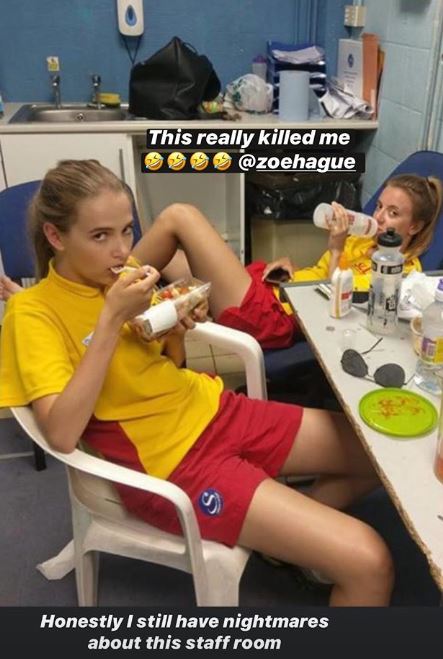 She's immensely popular on Instagram, with a massive 5.1million followers.

Yet Molly – who has an estimated net worth of £2million with boyfriend Tommy – scores lower than some of her fellow Islanders on the CV front.

The former lifeguard's skills – including teamwork and working under pressure – could see her become a marketing manager (82 per cent match). 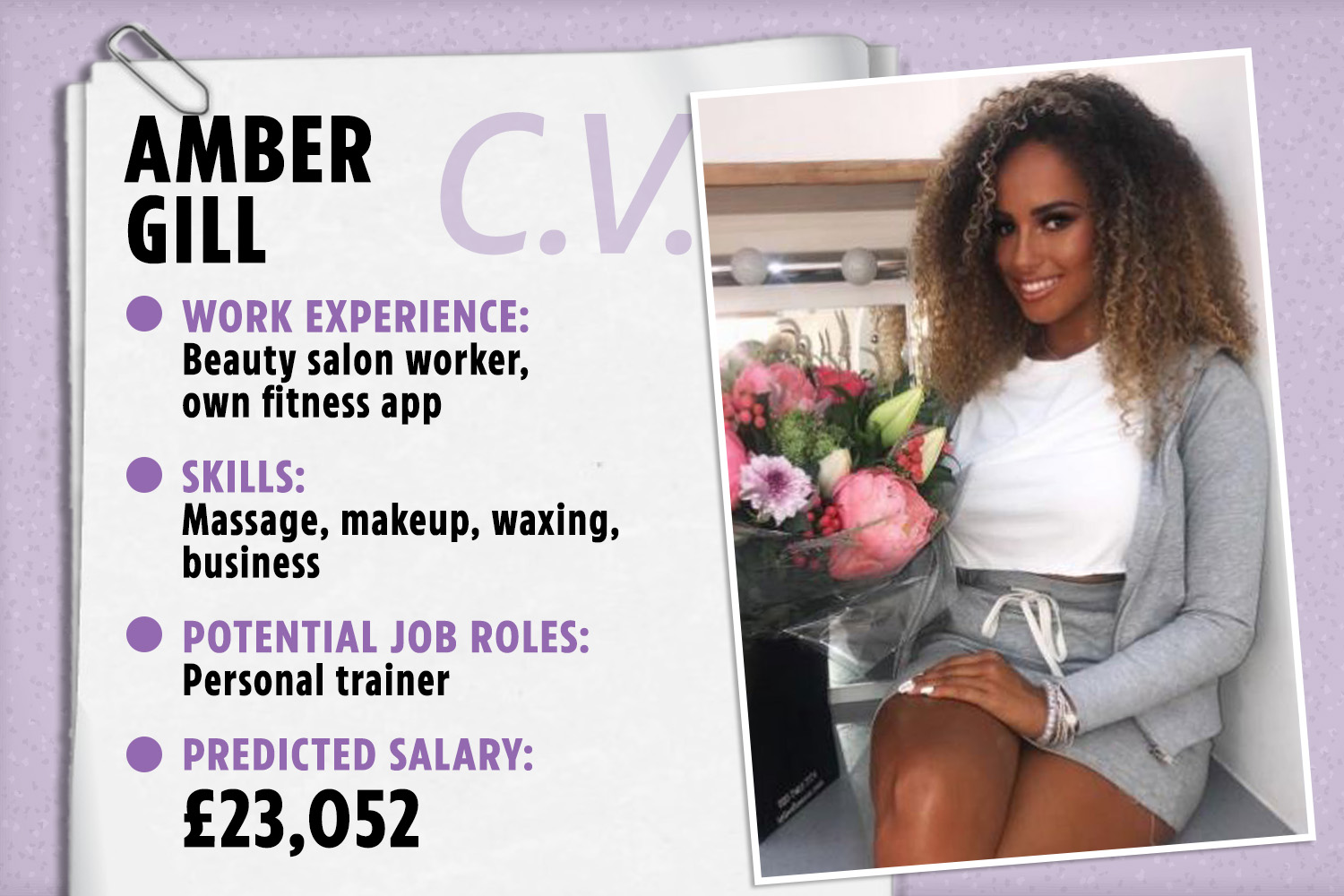 Without her fame, researchers say the 23-year-old could net a salary of around £23,000 – just under 40 times less than what she raked in last year.

She could also become a personal trainer (76 per cent match) after shedding one and a half stone and launching her own fitness plan, Amber Flexx.

Sharing before and after snaps of her weight loss, Amber proudly told her millions of fans: "Guys look at this… I lost my lockdown weight!"