It starts with a cough. You’ve heard the sound a million times before, in the same way you’ve seen people grip a subway pole, hand over a credit card, pass someone else their phone a million times before. Only this slightly hoarse, barking noise plays out over a black screen, it’s currently the sole object of your focus, and vaguely ominous. Oh wait, no worries, it’s coming from Gwyneth Paltrow. There she is, sitting in an airport, talking to someone on her cell (the voice on the other end belongs to director Steven Soderbergh), telling them that she’s glad they connected before she heads home. Just an Oscar winner chatting about an illicit tryst while eating beer nuts from a bowl at the bar. All good.

She does seem a tad pale and sweaty, however. So, for that matter, does that Ukrainian model in London, that Tokyo-based businessman, and the man on the train in Kowloon. He’s got a fairly nasty cough as well. You start to notice all of the tiny interactions they have with other people: hugging loved ones, nestling themselves into crowded elevators, using public transit, walking through an open-air fish market. They’re so innocuous, you’d hardly register them at all. Later on, however, you remember all of the little everyday points of contact with folks they have. You also recall the population numbers of the cities they are all in, stats which accompany those introductory scenes and number in the millions. The death toll will be substantial. Time is already running out.

This is how Contagion starts, not with a bang but with a whimper, and the future Goop founder hacking up a lung. If you saw Soderbergh’s all-star disaster movie when it came out back in 2011, you’d have recognized it as a particularly intense type of entertainment. You wouldn’t call it escapism — it’s a bit too bleak for that. But there’s a momentum to it that you associate with a night at the multiplex, with movie stars looking tense and thoughtful while their crusty-mouthed co-stars drift about in cadaverous makeup. Soderbergh knows how to shoot a thriller. Screenwriter Scott Z. Burns knows how to construct one. Cliff Martinez’s synth score couldn’t be more propulsive or more perfectly John Carpenter-esque. It’s a movie that never stops moving.

But while there are lots of films about battling viruses, ranging from the prestigious to the pulpy, Contagion has become the go-to viewing choice for people trying to make sense of the moment we find ourselves in right now. Back in January, The Hollywood Reporter noted that the almost-decade-old drama was the 10th-most-rented movie on iTunes. Go to the service’s charts right now, the day after a handful of major cities declared a state of emergency, and it’s currently in the No. 4 slot. (Should you open up the iTunes app on your laptop or your Apple TV, you’ll notice it’s listed as second in rentals, just behind Bombshell.) Speaking to Slate a few days ago, Burns noted that “whether on social media or in conversations with friends … people will say to me, ‘This is uncanny how similar it is.’” By “it,” he’s not talking about the film’s fictional virus MEV-1, which has a 72-hour incubation period and a much higher fatality rate than the present predictions regarding the coronavirus. He’s talking about the sense of watching things fall apart as everyday life grinds to a halt. Listen to experts talking about fomites and hand-washing techniques on TV — not the monitors framed in the film, but on real-life TV — and it’s as if you have stepped through the looking glass. 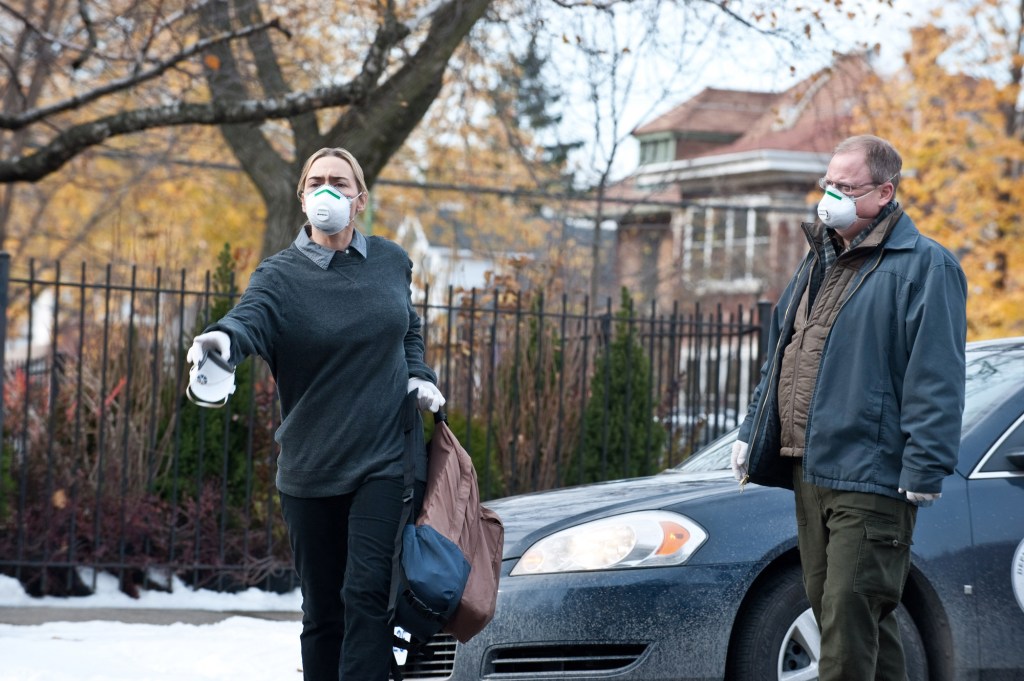 Contagion has, perhaps a little surprisingly, become the flashback film of the moment precisely because it’s not an outrageous worst-case scenario but an eerily realistic one. When a notable actor dies very early on, said A-lister does not return from the dead, arms outstretched and craving the taste of brains. Aliens are not responsible for the virus attacking humans; nor, for that matter, is it the result of foreign agents disrupting the American way of life, despite what fearmongers on a particular conservative news network would have you believe. What may be the single most chilling aspect of Soderbergh and Burns’ heavily researched scenario is how random the MEV-1’s creation is. “The wrong pig met up with the wrong bat,” a scientist notes after the genetic makeup of the virus is discovered. It’s almost a throwaway statement, until you get to the end and the film shows you exactly how “Day 1” played out. A bat happens to defecate in a pig pen. A little porcine fellow happens to consume it. He’s brought to a casino in Macao to be prepared for someone’s dinner; the chef happens to shake the hand of a visiting businesswoman. She happens to blow on the dice of the businessman playing next to her at a craps table. All it takes is the right series of wrong moves.

It’s everything that happens after that narratively/before that scene chronologically, however, that has likely made Contagion the single most urgent movie of the moment, and thus the most (re)viewed. It’s a disaster movie, but it’s also a pandemic procedural, one devoted to charting the how, when, where, why — and most important, what happens next. The film’s CDC and WHO representatives are competent, intelligent, and organized; they have mobilized to the best of their collective abilities. Kate Winslet’s doctor puts her life on the line; a San Francisco medical professional (played by Elliot Gould) does defy direct orders to destroy his samples but ends up uncovering a key piece of the puzzle. The Centers for Disease Control researcher who first charts the when-bat-meets-pig origins ends up testing a vaccine on herself, willfully ignoring protocol … but voila, she now proves there’s a workable vaccine. For every scene involving blogger Jude Law cashing in on the chaos or Matt Damon’s dad staving off people in the throws of extreme prepare-anoia, there are several sequences in which our better angels are on display, and there’s a sense that there are actually adults in the room.

And that last bit in particular is something we really aren’t getting right now when we hear about travel bans in lieu of testing, delayed responses instead of determination to make up for lost time, past leaders being defensively blamed rather than current ones acting with accountability. In that sense, maybe Contagion really is escapism. Despite the gruesome scenes of people dying and overall sense that society is just one viral video away from sheer anarchy, it’s a hopeful movie. Trust in scientists, and the innate decency in people, and we will prevail. Things fall apart, and then you put them back together again. Use common sense. Pray to your respective gods but also, y’know, wash your hands. It will get bad, the movie tells us. But it will also get better. People are probably flocking to this movie to see what may be in store for us in the next month or so. That last bit of optimism it offers us couldn’t have come at a better time.