COMEDIAN Lee Mack caused chaos on today's Good Morning Britain after he dropped the Soccer Aid trophy not once, but TWICE during his interview.

The 51-year-old has signed up to play in the Unicef football fundraiser for the third year alongside fellow funnymen Russell Howard, Mo Gilligan, Tom Davis and Joel Dommett. 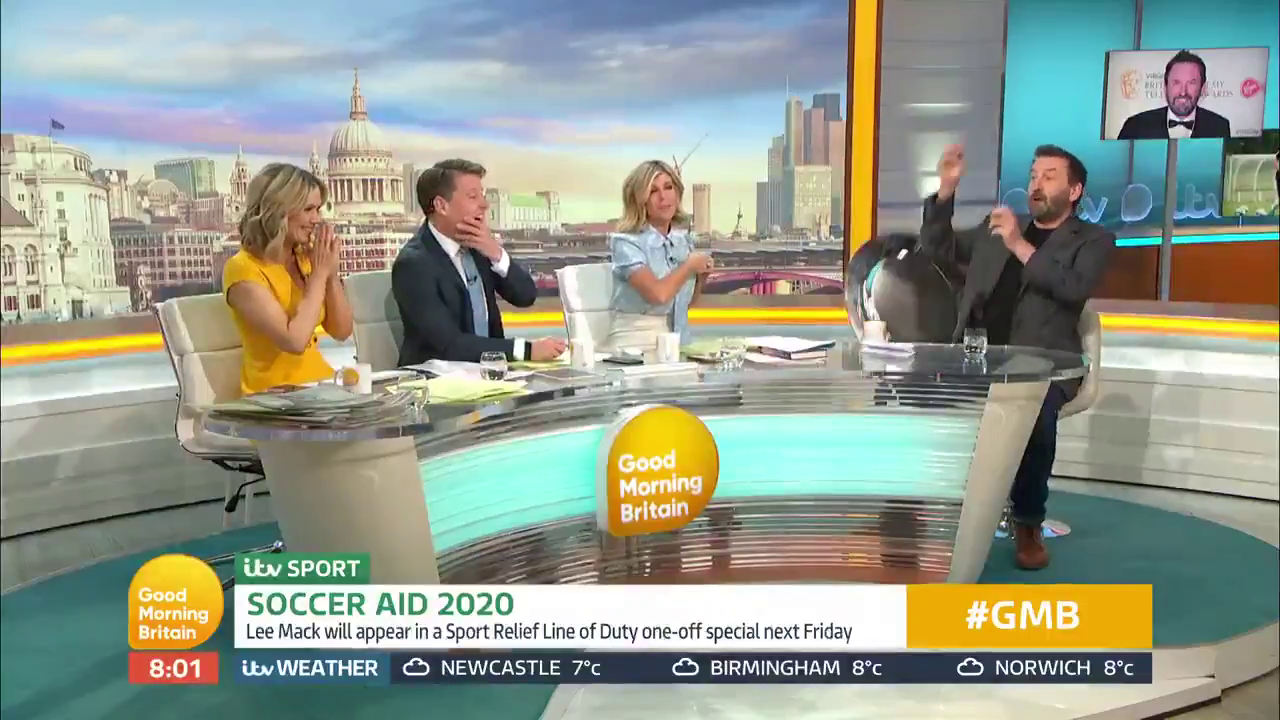 And while Lee attempted to promote Soccer Aid's upcoming charity match on June 6 at Manchester United's Old Trafford stadium, he left ITV's morning stalwart in disarray when the event's trophy fell out of his hands and crashed onto the set.

Handing over the imposing silver plate, host Ben Shephard, who has previously taken apart in the event, said: "That's for you when you left the trophy at Old Trafford for England".

Proudly holding the trophy, he looked deadpan down the camera, "I mean, what could possibly go wrong?" then clumsily dropped the plate out of his hands.

As it crashed to the floor, host Kate Garraway exclaimed: "Oh!" before bringing her hands to her mouth in complete shock.

In disbelief, Ben admitted: "It's not the trophy I'm worried about, it's the set. That's hardcore." 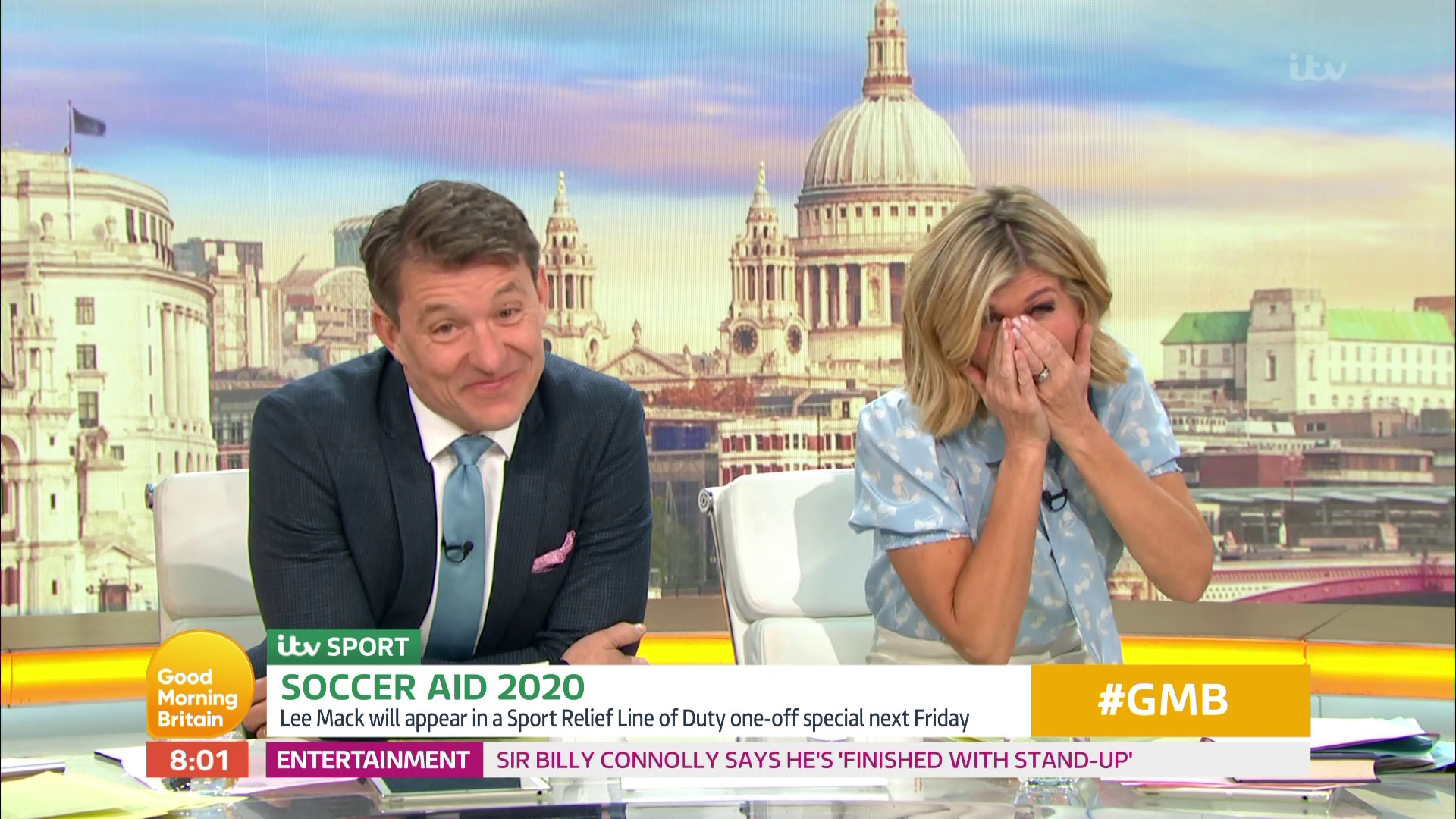 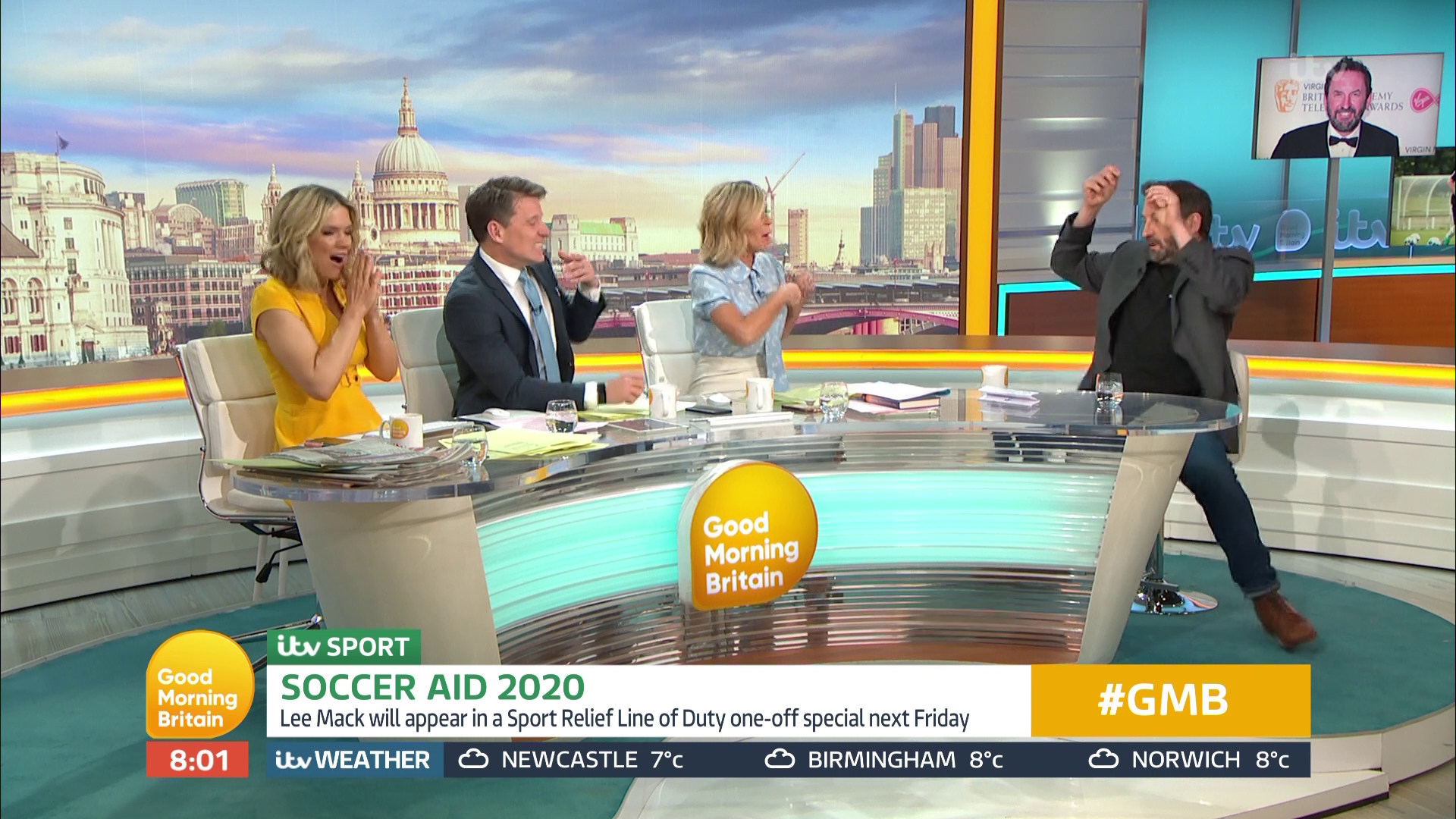 While broadcaster Kate second his comments and shared: "I know, that's a heavy trophy. Our director is having a small fit, I'm so sorry. It's fine, the set is fine."

Attempting to move on from the hilarity, Lee promised Ben he wouldn't drop the charity plate a second time.

He vowed before it slipped out of his hands again: "It's always funny a second time. I promise, I promise if I did it a second time… oh, sorry.

"I won't try a third time because that would be ridiculous". 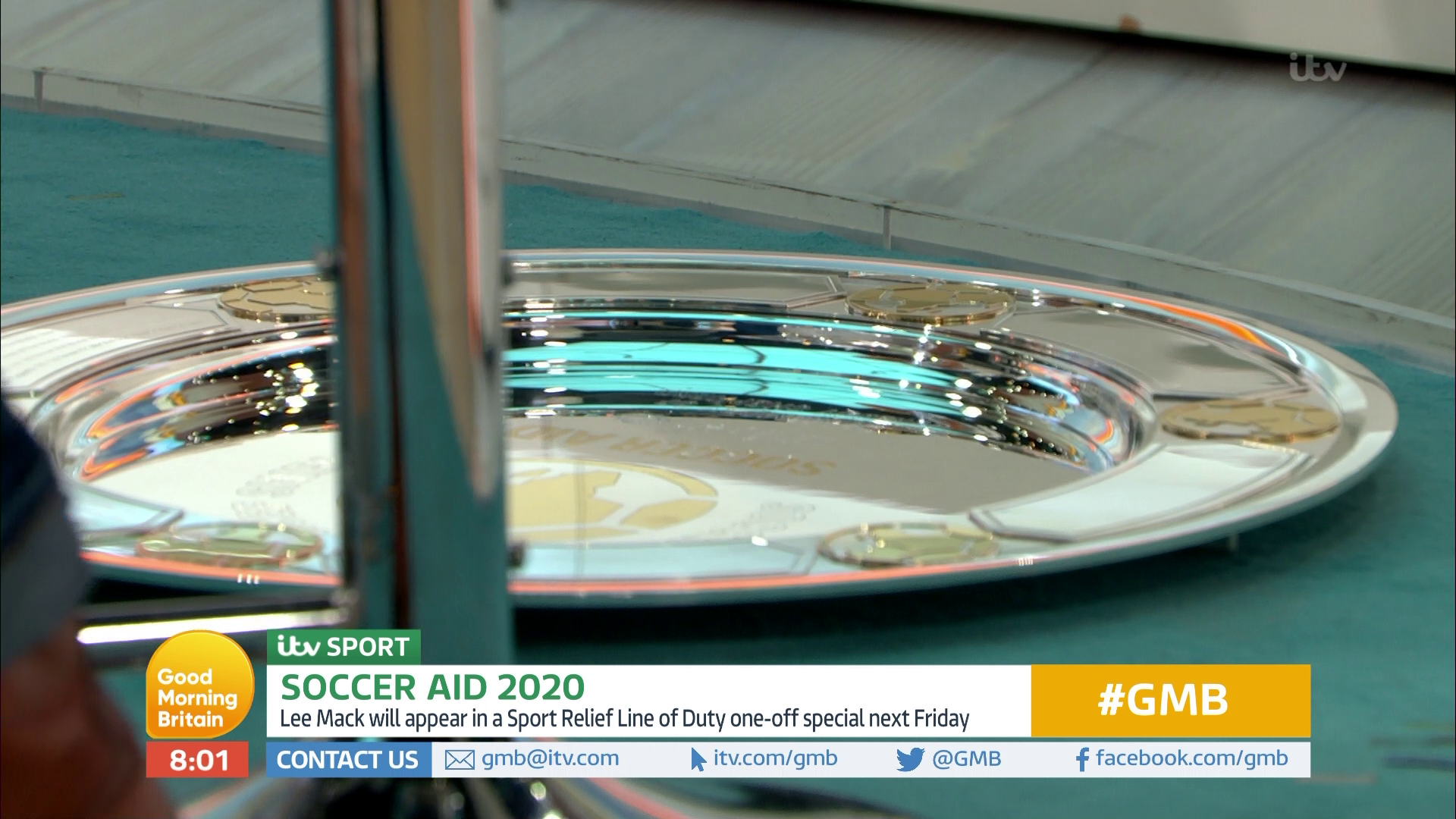 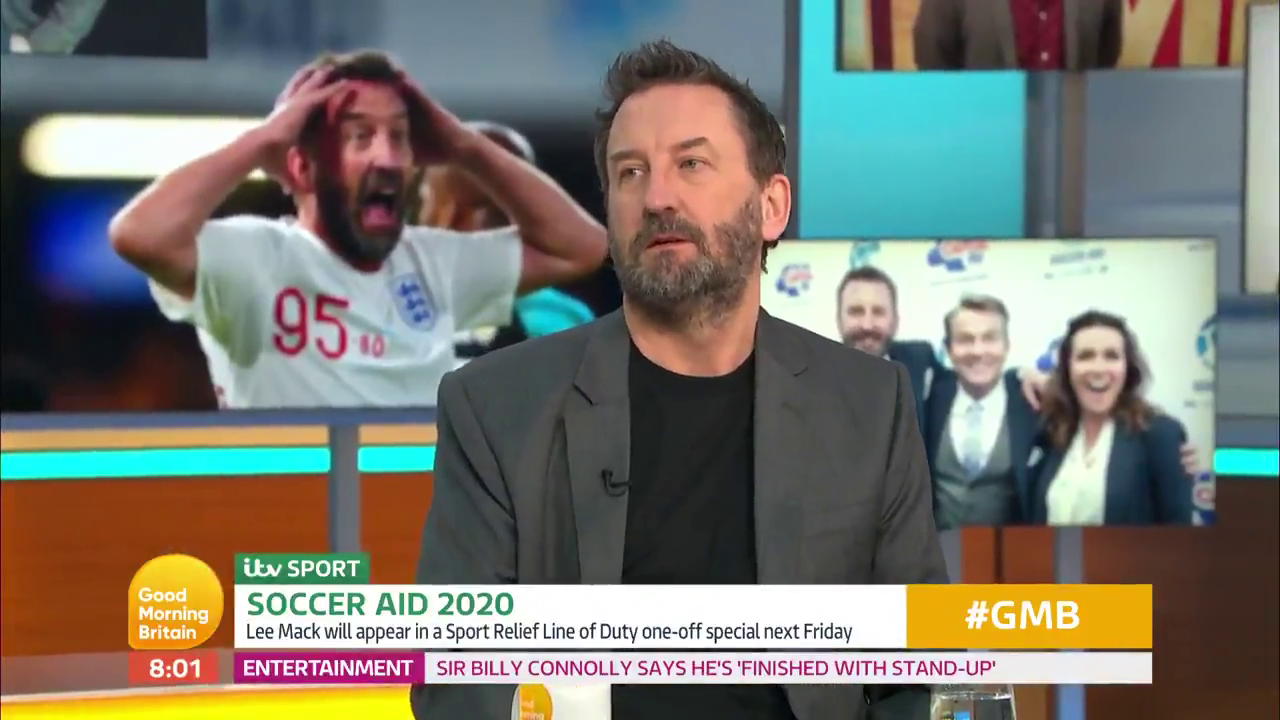 The Not Going Out star's blunder continued to leave the hosts in fits of laughter while the show's crew and Unicef's reps were left worried about the state of the trophy.

"The team from Unicef are behind us and they're absolutely panicking now," Ben pointed out. "Look what you're doing to them for Heaven's sake.

"Please stop, someone balance it, it's too heavy". 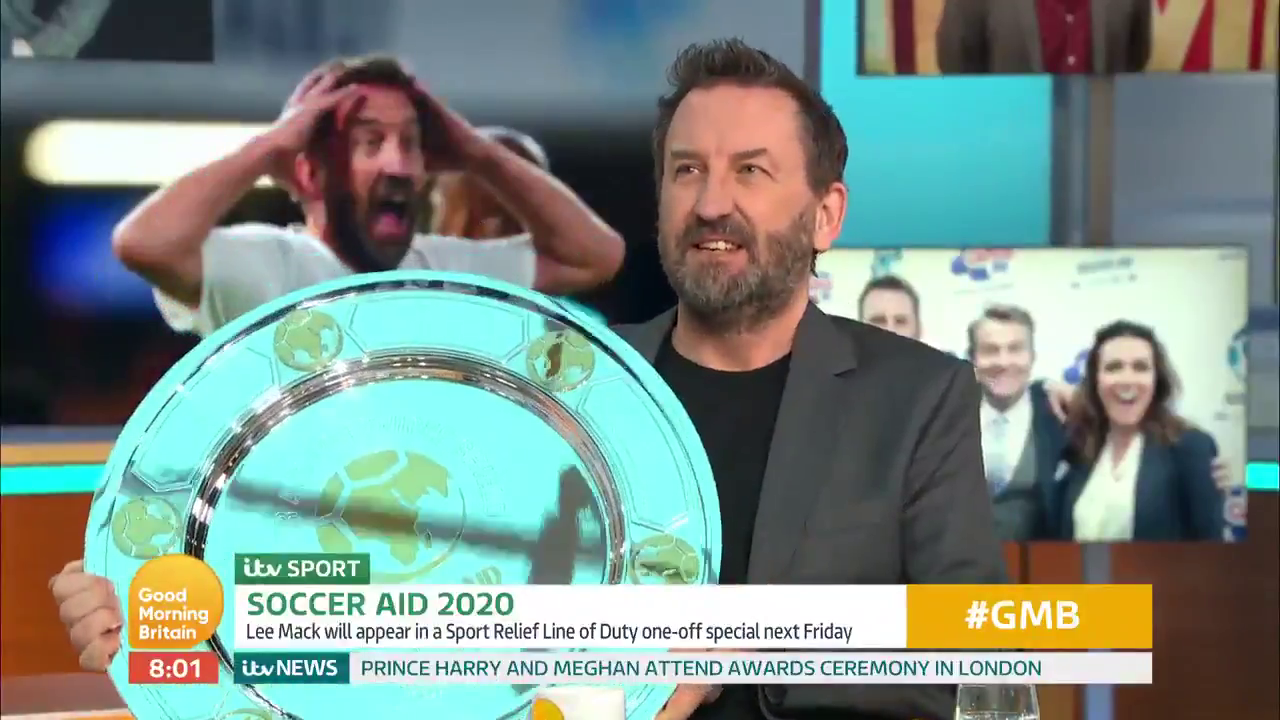 Soccer Aid XI is set to take place at Old Trafford stadium on Saturday, June 6, which will be broadcast on ITV.

Founded by Robbie Williams, Soccer Aid for Unicef has raised more than £38million for charity since the annual match first kicked off more than 12 years ago.

The funding goes towards making sure more children in impoverished countries can spend more time at play.