In the world of stand-up comedy Amy Schumer is an acquired taste. Bursting onto television screens in 2013 with her groundbreaking comedy series “Inside Amy Schumer,” the actress/writer/comedienne has used her platform to discuss everything from her vagina, to rape culture, to double standards when it comes to beauty. Her work is especially feminine and where stand-up remains a boys club, it’s easy to see why people who don’t like Schumer really don’t like her.

Regardless of the misogyny in the industry, Schumer has carried on, documenting her life most recently in the 2017 Netflix special “Amy Schumer Growing.” Similar to that, “Expecting Amy” blends documentary footage of Schumer going on tour, filming the aforementioned stand-up for Netflix, struggling with a difficult pregnancy, as well as her husband’s autism diagnosis. It’s a tall order of life events, yet so much of it ends up feeling superfluous for a three-episode HBO Max series.

It’s interesting to realize Alexander Hammer, who helmed the astounding Beyonce “Homecoming” documentary, helmed this. He captured the vibrance and bombastic nature of Beyonce so well and in this takes a sharp 360 into examining the vulnerability Schumer exudes as she navigates not just being a first-time mother, but suffering from hyperemesis gravidarum — a pregnancy complication involving extreme vomiting. There’s an irony in hearing Schumer be so open about body issues affecting women and then seeing her vomit for nearly two hours of showtime, eventually landing herself in the hospital.

The problems lie more so with the way things are edited together. The first episode is comprised significantly of Schumer’s Instagram videos, making this great to watch on a phone but headache-inducing on a larger screen as the aspect ratio constantly changes. On top of this, there are extreme moments of hyper-editing, where scenes of Schumer walking will be spliced in rapidly as if time is jerkily moving at excessive speeds. It’s unclear why it’s utilized so much in the first episode but not the second, making it feel even more of a failed attempt to be slick than anything else.

There’s a similar frenetic feeling to the content itself, which vacillates between interesting issues affecting pregnant women and pure Schumer self-indulgence. This isn’t to say Schumer doesn’t have a right to document her wedding — a blend of celebrity cameos and heartfelt moments of romance — or her pregnancy. It’s just hard to get excited to watch someone’s wedding video or birth journey. Occasionally there are moments that women should watch, especially as Schumer deals with her hyperemesis, which is frightening to everyone around her. But too often that’s juxtaposed with extended routines from Schumer’s stand-up set. 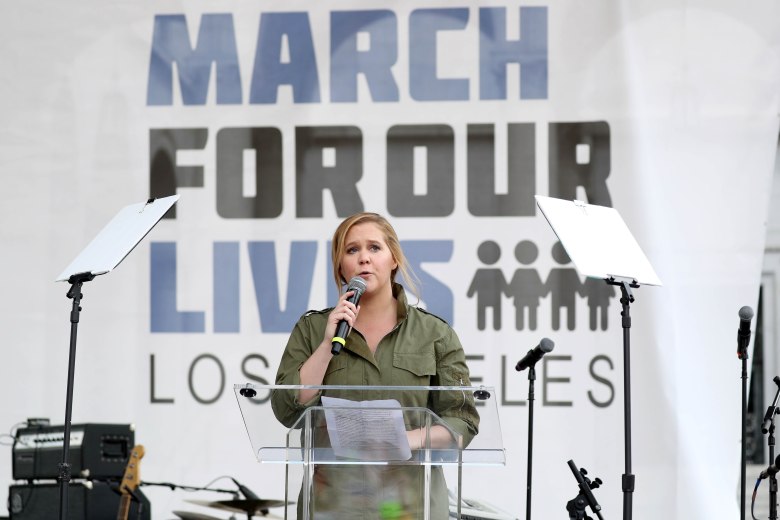 The second episode dives into Schumer and husband Chris Fischer dealing with his diagnosis of autism. Fischer gets a chance to talk about his relationship with his family and how this diagnosis was always there — but there just wasn’t a name for it. It’s certainly brave of Fischer to put his own life story on-camera. Unlike his wife, he isn’t a public person. It gets a bit trickier when Schumer kinda sorta co-opts his experience for her special.

Maybe because I’m hyper-sensitive to able-bodied/neurotypical people telling stories about lived experiences they aren’t privy to, but it’s hard not to see others tell Schumer how sweet she is to put her husband’s diagnosis as a part of her routine into her set. Later, after alluding to “problems” in their marriage — many of which are not shown onscreen — we see Schumer and Fischer argue about his reticence to have her be so honest about his diagnosis, and how certain things could be misconstrued as mean. She starts to cry and he eventually lets it go.

And, even more grating, scenes of serious drama will transition to more of Schumer hijacking any sense of message to remind audiences of her relationship. Episode 2 kicks off with Schumer hospitalized, only to cut back to “one year later” as we watch her wedding in almost its entirety. Never mind that significant portions of the wedding were shown in the first episode as well. There’s also a weird meta quality of watching Schumer film a special within a special, a technique we also saw play out in “Amy Schumer Growing.” There’s a repetitive feel if you watch this alongside any other Amy Schumer media.If you don’t want to feel stuck in a loop it benefits you to love her, all or nothing.

Only the first two episodes were made available to press so I’m assuming Schumer gives birth in the finale (wouldn’t that be a twist if she didn’t?) “Expecting Amy” really has no right being a three-hour(ish) series and could have been a 90-minute movie. If you absolutely love everything about the comedienne, right down to watching her dog pee, you’ll be in heaven. If you want to see a successful woman deal with a hard pregnancy, that’s there, in bits and pieces. At the end of the day though it’s hard not to see “Expecting Amy” as little more than a first-time mom wanting to document her pregnancy in the biggest way possible.