Liv Flaherty (played by Isobel Steele) and Vinny Dingle’s (Bradley Johnson) relationship came to a halt before Paul Ashdale’s (Reece Dinsdale) death. Liv had been trying to make Vinny see his father’s true colours, but he was so manipulated and terrified of Paul that he pushed her away. Despite the truth finally emerging, Liv has stuck by Vinny – albeit at a distance – and is trying to be a supportive friend. But what Vinny doesn’t know is the secret she is harbouring and how this is sending her down her own path of destruction. Unable to deal with everything, will Liv leave Emmerdale to clear her head?

In scenes set to air this week, Liv will end up relapsing, as the ongoing torment of keeping what really happened moments before Paul died, a secret, is playing havoc with her mind.

Last week, fans of the soap saw her wrestle with her emotions and whether opting for the bottle was a good idea.

In the past, Liv has swapped water for vodka in a water bottle, before finally admitting to Aaron Dingle (Danny Miller) that she had a problem with alcohol.

Luckily, she sought help and after a stint in rehab, she seemed to be coping with minor day to day problems.

But after confronting Paul for the evil abuser he really was, and then abandoning him when he was trapped and called her to help him get out, Liv feels immense guilt. 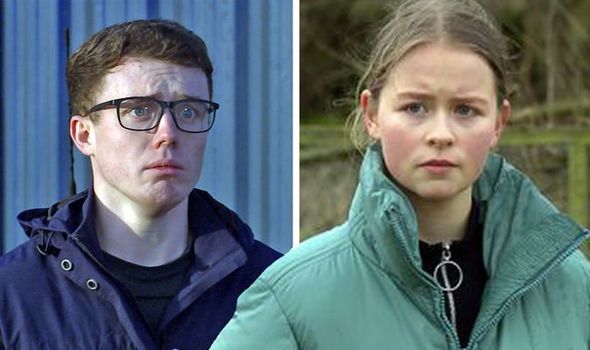 Seconds after she stumbled out of the barn, the building exploded and Paul was still inside. He died from his injuries in the hospital later that day.

And while she has been trying to support Vinny through organising Paul’s funeral as well as dealing with the many opinions of the Dingle’s towards his father, Liv has been silently suffering.

But, after a conversation with Lydia Hart (Karen Blick), Vinny is having therapy sessions and when he tells Liv about his latest one, she is left concerned.

Vinny explains how he doesn’t feel like progress is being made, instead, he feels he has more questions about the past than answers.

Sensing this worries Liv, Vinny quizzes her but she refuses to open up and brushes off his concern.

Later, Liv is one amongst many who have been invited to baby Frankie’s christening.

Following the ceremony, everyone gathers in the Woolpack to raise a toast to Tracy Metcalfe (Amy Walsh) and Nate Robinson’s (Jurell Carter) baby and Liv is feeling the pressure.

She secretly sneaks a drink of vodka to try and numb the pain she is feeling about Paul.

Realising she cannot stay at the pub, Liv heads out and viewers will see her sitting on the swings drinking from a bottle.

And that afternoon she is found passed out on the sofa at Mill Cottage by Vinny.

Vinny is worried about Liv and tries to wake her up, but to no avail.

This is when he spots the empty spirit bottles lying on the floor and images from filming show Liv waking up just as Vinny holds them in disbelief,

Will Vinny find out the true extent of her drinking and will Liv be able to tell Vinny the truth about what really happened with Paul?

There is also the question of whether Liv needs to seek help once more, could she leave the village to get some space and perspective?

As for her relationship with Vinny, there is a strong possibility he is going to lash out at her when he finds out how she walked away from his father in his time of need.

Victoria Sugden (Isobel Hodgins) has been trying to help the newcomer find his mother – and they thought they were onto something when Meena Jutla (Paige Sandhu) obtained a phone number for her from her medical records.

She passed it onto Ethan and he contacted the woman – but what he doesn’t realise is Meena is the person posing as his mother.