Home » TV and Movies » Emmerdale spoilers: Leyla Harding makes slip up in Belle and Jamie exposé – did you see?

Tonight’s Emmerdale saw Belle Dingle (played by Eden Taylor-Draper) and Jamie Tate’s (Alexander Lincoln) affair exposed in front of the whole village. In a twisted set-up conjured by Leyla Harding (Roxy Shahidi) and Andrea Tate (Anna Nightingale), the two lovers were shouted and jeered at by other residents and Jamie turned on Belle, accusing her of orchestrating the whole thing. After playing the distraught wife, Andrea fled and during a conversation with Leyla outside the Woolpack toilets, they congratulated one another on their performance. But did someone overhear?

Since the first day of the year, Jamie and Belle have been secretly dating one another.

He is married to Andrea and together they share daughter Millie, Belle, on the other hand, was dating Ellis Chapman (Aaron Anthony), but after realising she didn’t love him, she ended things.

Emmerdale viewers have seen the vet and receptionist struggle with the dynamic of conducting an affair, several times they have stopped seeing on another, but their chemistry brings them back together.

In recent months, Andrea found out about Jamie’s infidelity and following a heart to heart with Leyla, she was faced with two options; to fight for her marriage or confront him and walk away. 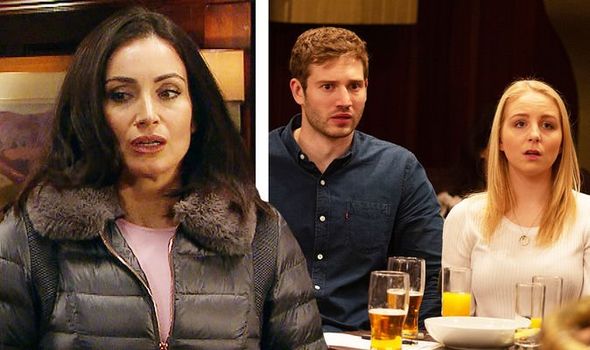 Determined to keep her family together, Andrea decided to win Jamie back; and this involved a family holiday which she hoped would make him realise was how perfect she and Millie were for him.

While he had a lovely time with his daughter, upon his return, Jamie revealed he had started divorce proceedings behind Andrea’s back, the first step towards leaving her and being with Belle.

This seemed to appease Belle and the next step Jamie was going to take would be telling Andrea their marriage was over.

Last week he and Andrea were due to have dinner together, but his plan was interrupted by a text Belle had sent which Andrea saw. 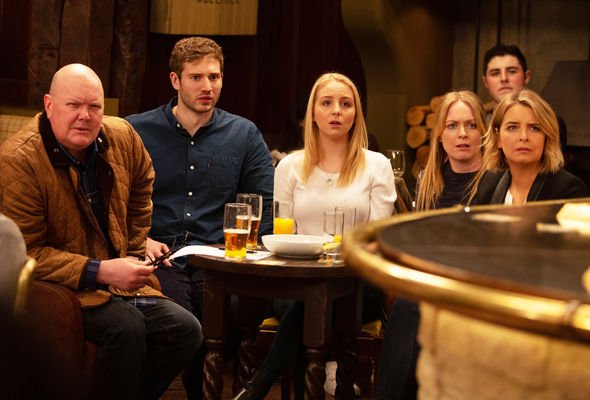 Upset and angry, Andrea fled and was comforted by Leyla, together they made a plan to expose Jamie and Belle’s affair.

Tonight, this plan was put into action with Leyla requesting everyone put their phones into a box to ensure no one cheated during Bob Hope’s (Tony Audenshaw) pub quiz.

And this gave Leyla the perfect opportunity to steal several text messages sent between Belle and Jamie and put them onto a USB stick for the picture round.

Moments later, their conversation was revealed to everyone and Andrea flew off the handle, pretending to be shocked and hurt by the revelation. 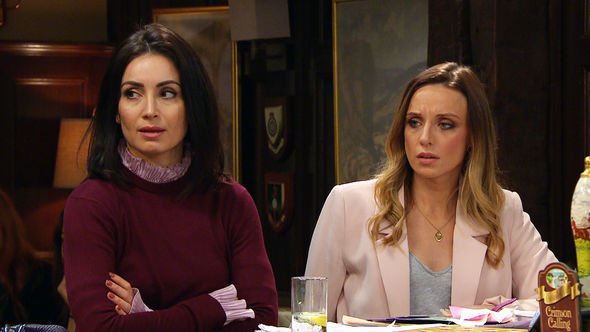 After screaming at Jamie, she left in the direction of the toilets and Leyla soon followed.

“Perfect operation, he’s convinced it’s Belle,” Leyla said reporting back to what was going on in the room next door.

“Good, good. Now he just needs to ditch her and realise what he’s got with me,” Andrea remarked.

“Are you sure you’re going to be able to get over all of this?” Leyla asked concerned and her friend said: “We have to, that was the whole point.” 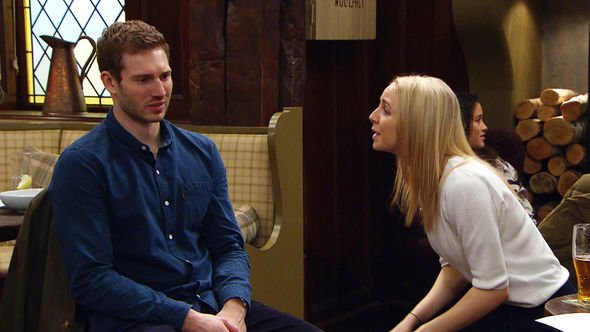 “Only it’s hard, going back. I know you’ll be able to put a face on and pretend for Millie,” Leyla explained.

“I need him Leyla, I need him more than Belle does. He just needs to get her out of his head and then I can make him fall in love with me again,” Andrea commented.

But were the two women alone, or did someone overhear their conversation?

Ater all, the last thing Leyla needs is for someone like Leanna Cavanagh (Mimi Slinger) listening to every word she said…

Emmerdale airs Monday, Wednesday and Fridays at 7pm on ITV.