Home » TV and Movies » Emily In Paris: How did Emily in Paris pay tribute to Sex and the City’s Carrie Bradshaw?

Emily in Paris dropped on Netflix last week, Friday, October 2, starring Lily Collins in the title role of Emily Cooper. The Chicago-born fashionista moves to Paris to pursue her dream career and meets both friends and love interests along the way. But no matter what, Emily continues to try and focus on her career, all the while dressed for success.

While Emily in Paris might be a Netflix Original series, it does have a very familiar feel to it.

This is because Sex and the City creator Darren Star is the man behind the new show being brought to life.

HBO’s SATC was a massive success in the 90s and early noughties so many fans have enjoyed the similarities between the two shows.

Star wasn’t the only SATC crew member to work on Emily in Paris either.

She was then employed as SATC’s designer and Field went on to become a four-time Costume Designers Guild award winner.

Field admitted to E! News it was Star’s involvement which made her interested in working on Emily in Paris.

She added: “It [SATC] became iconic. I’m so happy about that, that people like it so much.

“But it was never a plan or anything conscious on my part. I just did my job.” 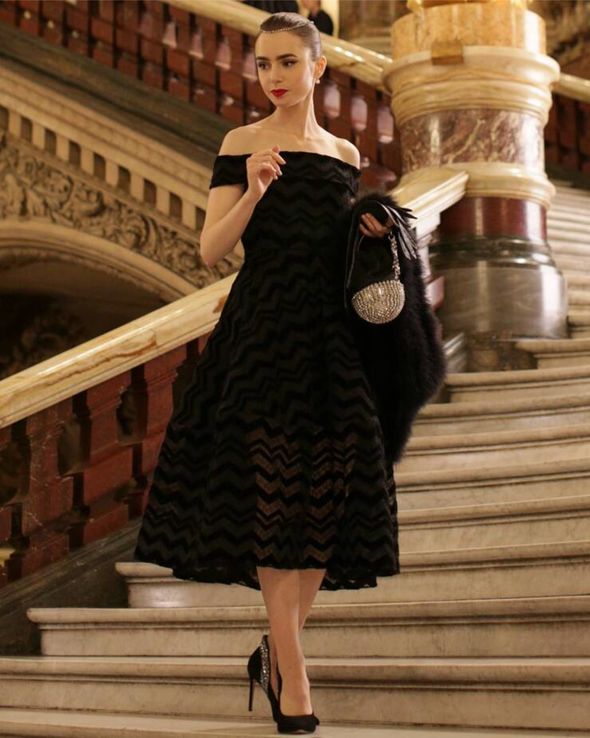 How did Emily in Paris pay tribute to Sex and the City’s Carrie Bradshaw?

Comparing Collins and Parker’s styles in the two shows, Field said: “I would say that in a certain way, Emily was at a bit more, I don’t want to say not as eclectic, but she had a story at a certain course, as she evolves in Paris, whereas Carrie, it was like a free-for-all and Sarah Jessica understood all that.

Even though Emily in Paris is not related to SATC, Field was eager to pay homage to the HBO series in the Netflix show.

In a statement, Field revealed: “Emily’s black tulle skirt in Episode 102 is an homage to Carrie’s tulle skirt in the series finale of Sex and the City.”

During the episode mentioned, Emily attends a rooftop party where she stuns everyone in this elegant black skirt.

While not the same colour, in the final episode of Sex and the City, Carrie wore a seafoam-green skirt which viewers completely fell in love with at the time.

Field said: “If Sarah Jessica [Parker] is the queen, Lily [Collins] is the princess.”

The famous designer also took inspiration from another style icon.

She explained: “I took the Liberty and I did an homage to Audrey.

“I mean, you look at her and you see Audrey Hepburn. It’s insane.

“So I was a little not afraid, but maybe reticent, should I do this? Is this going to be corny? But I think it worked OK.”

Emily in Paris is available to watch on Netflix.