EastEnders spoilers have announced the return of Phil Mitchell (played by Steve McFadden). After a couple of weeks on the run following the tragic boat accident which killed Dennis Mitchell (Bleu Landau), Phil has been a wanted man, especially by Sharon Mitchell (Leitita Dean). With his comeback imminent, there are still many questions which need to be answered and one of them being his relationship with his estranged wife.

Earlier this month, BBC One viewers tuned in to a week of dramatic episodes which celebrated the soaps 35th anniversary.

Over the course of many instalments, fans saw the Walford residents embark on a Thames river boat party like no other, which subsequently changed all of their lives.

It was the moment Phil got his hands on Keanu Taylor (Danny Walters) for having an affair, impregnating his wife and then attempting to flee with her.

This was all while leaving his fiancée Louise Mitchell (Tilly Keeper) and baby Peggy behind – both who are Phil’s daughter and granddaughter. 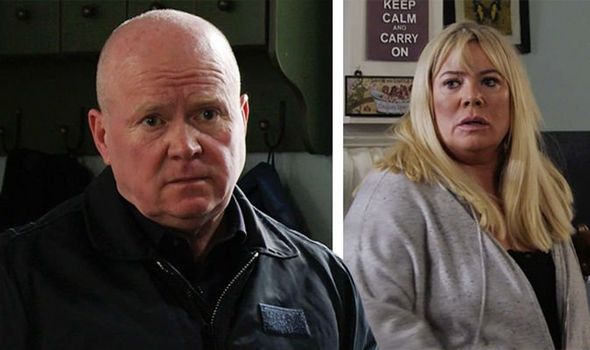 Holding this surrogate son responsible for tearing his family apart, more damage was done than the revenge which was intended as Dennis got caught in the crossfire when the boat began to sink.

While the youngsters death was not directly Phil’s fault, Sharon was told if Phil and Ben Mitchell (Max Bowden) hadn’t been fighting with Keanu, the boat wouldn’t have jolted when the gun fire was shot.

But technically, Dennis would’ve survived if it wasn’t for Ian Beale (Adam Woodyatt) trapping him in the locker room and then losing the key to help him get out.

However, Sharon is yet to know about the part her best friend played in her son’s murder.

Nevertheless, with Phil returning, what are the chances of their being a calm reconciliation?

Fans already know Sharon is going to lunge at Phil on the day of Dennis’ funeral.

Overwhelmed with grief and anger, Phil arrives back just at the wrong time and finds himself on the receiving end of a knife, but luckily Ian and Kathy Beale (Gillian Taylforth) are on hand to intercept.

However, with Phil loving Dennis like a son him being the only one who truly understands Sharon, will he find himself comforting her in her time of need?

After all, BBC boss Kate Oates did promise one final twist for the fan favourite couple.

“We’ve got a very long saga with the Mitchell family – it all comes from the Sheanu story,” she said in a Twitter Q&A.

“But it’s really exciting, because everybody involved in that story, all the characters have really strong agency, there’s loads of twists and turns.”

Could one of them be Sharon and Phil getting back together?

Viewers have been suggesting what could happen when Phil returns.

One fan tweeted: “I don’t think I can face what might happen when Phil and Sharon come face to face I don’t want them to get back over grief when he isn’t good for her #EastEnders.”

“I swear they better not put Sharon and Phil back together. he put her through hell and back, keeping them apart is what’s best for Sharon #EastEnders,” someone else chimed.

EastEnders returns on Monday at 8pm on BBC One.