Escape to the Chateau: Dick counts all of the windows

Dick Strawbridge and Angel Adoree took on the mammoth task of converting a 19th-century French castle into their house and a thriving business six years ago. The Chateau has 12 acres of land, hundreds of trees and seven outbuildings, while inside there are five floors boasting 45 rooms, six chimneys and 15 fireplaces. To add to this, the couple has a wine cellar that can hold 5000 bottles. Understandably, a renovation this size takes some time and the couple are still making changes. In a More4 episode of Escape to the Chateau, Dick and Angel sat down with the Baglioni Family’s original bills and worked out how much it would cost to run the castle in present times. This then prompted Dick to list the most urgent renovations the property needed – one of which was the windows. But after counting the number of windows they had, Dick put it simply – they were “f****d”.

Tracy-Ann Oberman is the voice over for Escape to the Chateau and she explained how “the 19th century spreadsheet [was] preserved in great detail”.

“In 1869, a roofer was paid around 40p a day, a locksmith around 50p and a labourer 25p – the original owners clearly quibbled over invoices knocking off margins where they could,” she continued.

Dick said: “If you multiply it by £20 – any of these numbers, that will give us what the costs are today. 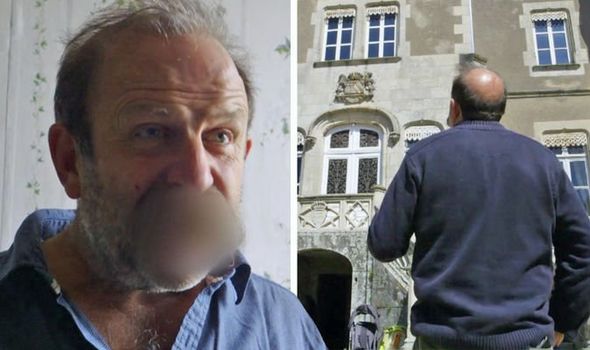 “If you think today, if you had a plot of land and you were spending £1,000,000 building something, you could never hope to get something as grand as this,” he added.

Tracy-Ann explained: “The Chateau was built as a gift from the young single Baglioni to his wife. Dick and Angel’s renovation will be no less a labour of love. Except they won’t be able to afford much labour.”

Tracy-Ann mentioned: “The French may have abandoned these landmarks, knowing what money pits they are, but former Military man Dick is convinced he can do most of the work himself. And his first target – the windows.”

“The detail is phenomenal, the amount of work that has gone into them, they’re really quite special,” Dick said.

“Having said that, they’re falling apart, the glass is barely being held in, sometimes we have no glass. The wood is so rotten that it’s on the edge of crumbling.”

“Every frame was crafted out of oak, each window has its own unique cast-iron handle and there’s a few more than your average two-bedroom flat,” the voice-over revealed.

“That’s a proper arrow slit, look at the angles on that, we’ll keep that. 41…49…59 windows,” he then turned to the camera and commented: “This is not even funny.”

“And if that wasn’t enough, Dick and Angel are also working to an ambitious deadline – November is the month when they first met, they want to celebrate with a wedding for 200. The only problem is, that’s around nine months away,” Tracy-Ann mentioned.

“Time’s ticking, I really didn’t appreciate the enormity of the job – it’s not just a slap of paint and a taxidermy head,” Angel commented.

A post shared by Escape to the Chateau™ (@escape_to_the_chateau)

“We have a massive task ahead of us,” Dick added. “Going into every single room, I think ‘Okay, there’s about a month on each room’ multiply that by the number of rooms and November is actually very close – we’re f****d.”

The biggest job Dick and Angel has when it comes to restoring The Chateau is replacing the roof.

But with it being the biggest expense, it has not yet been done.

Escape to the Chateau is available to watch on 4oD now.