Paralympic champion Libby Clegg has made it through to the semi-final of Dancing On Ice after the judges unanimously saved her.

Libby was in the skate off with Coronation Street star Lisa George.

While Lisa was devastated to be leaving the show, she was thrilled she had reached that stage in the competition.

She told host Holly Willoughby: "I'm made up I got this far. I've had so much fun. Thank you Tom!"

Libby has made history on the hit ITV show as the first blind celebrity to take part. Although the medal winning sprinter actually claims her condition gives her an advantage on the ice.

She explained: "I can’t see so don’t feel dizzy or nauseous when I do spins.

“Although I can’t watch my partner demonstrate moves on the ice, I have great hearing so listen to his skates and try to mimic the clicks, scrapes and foot placements I hear.

“I count the number of strides it takes to reach the barrier of the rink so I don’t just fly into it. And, touch wood, I’ve not had any injuries. I don’t suffer things other people do.”

Libby's incredible peformances have now earned her a place in the semi-final alongside Perri Kiely and Joe Swash. 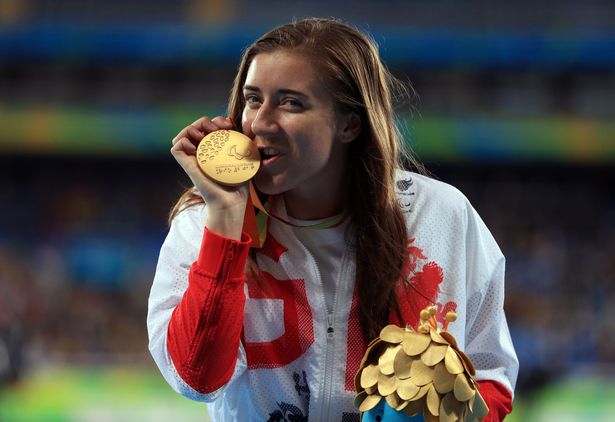 The athlete, who has been awarded an MBE for her contributions to athletics and charity, has Stargardt's Macular Dystrophy disease, which she was diagnosed with when she was nine.

She has previously described it as "like looking at a pixelated computer screen or a scrunched-up firework".

Libby is registered blind and now only has limited vision in her left eye.

Heartbreakingly, her condition is deteriorating and there is no treatment for Stargardt's Macular Dystrophy, which means she could one day lose what's left of her vision.

Libby said: "I’m at the age where my sight should be stabilising but it’s still deteriorating.

"Things will never go black, but I don’t know yet exactly what I will be able to see."

But Libby, who has a baby son, Edward, with her partner and fellow Paralympian, Dan Powell, is determined her condition won't hold her back.

There is also a 50/50 chance her son will inherit the same condition as his mum – but that's something Libby is prepared for.

She said: "If he does have a sight condition, it's not that I would expect him to become a Paralympic champion or anything, but there are options

"There are a lot of things you can do that people tend to restrict you and not think you can.

"He could go into anything. If he can't see, we're not going to treat him any differently anyway."