Dan Walker and Steve Reed OBE were discussing the easing of lockdown restrictions on BBC Breakfast today. But during the Shadow Local Government Secretary for Labour’s interview, several technical blunders occurred and Walker called time on the conversation and handed over to Carol Kirkwood for the weather.

“Mr Reed you have frozen again – we’re having a bit of a problem with your sound as well,” Walker said.

“So we’re going to leave it there, thanks for talking to us. That’s Steve Reed from the Labour party joining us live on Breakfast this morning.”

Turning to his co-presenter, Walker added: “Over the months we’ve had a good record with our live calls and zooms haven’t we?” 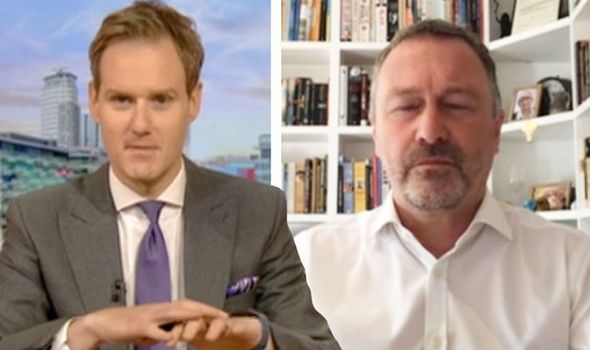 It comes after Walker asked Reed about his personal take on the changes to the coronavirus lockdown measures in England which were announced yesterday afternoon by Prime Minister Boris Johnson.

“We have to by large, follow the science, but the science is not always absolutely clear so I think the government is doing the right thing easing the lockdown now but they must do it in a measured and controlled way.

“It’s critically important the messaging they communicate to the public is crystal clear so people know what they should and shouldn’t do,” the MP added.

“In terms of that messaging to the public – these new measures in England are guidance and not law,” Walker said.

He then asked: “A lot of this is going to be down to common sense and our own personality responsibility isn’t it?”

“I don’t have a problem with relying on people’s common sense – the important thing is the messages must be absolutely clear,” Reed stated.

“The goervmemntn got this badly wrong around Dominic Cummings when they appeared to be allowing rule-breaking to be going on.

“It’s very important as we change the rules around social distancing down from tow metres to one metre plus that everyone knows that that means – we haven’t seen the detail on how they’ll do that now.

“I want to see that before I comment further,” he continued.

I do think that are doing the right thing, they just want to be careful about how it happens.”