What if your child was potentially a monster? That’s the question facing Cruel Summer mom Cindy Turner in this Tuesday’s episode of the Freeform psychological thriller (airing at 10/9c)

As the town rumor mill goes into overdrive about her daughter Jeanette’s possible involvement in the disappearance of schoolmate Kate Wallis, Cindy’s perfect life begins to crack, her portrayer Sarah Drew previews in the following Q&A. And much like viewers, Cindy “doesn’t know what to believe” when it comes to Jeanette’s word vs. Kate’s, the Grey’s Anatomy vet says.

TVLINE | In this week’s episode, we learn more about who Cindy is not only in the present, but also who she was in the past as a teenager. What can you preview?
We get a little more insight into the relationship between Jeanette and her mom, and really the thing that Cindy built her identity on. You start to understand that for Cindy, for her identity to be OK and on a strong footing, her family [and] her children need to be in a place of success. That translates directly to her sense of identity. In 1994, before everything falls apart, Jeanette is really living her best life, at least from Cindy’s perspective. I think from Jeanette’s perspective, too, but certainly from Cindy’s perspective, it’s just the best. She is the most popular, she’s got the best friends, she’s got the cutest boyfriend. The success of her daughter means Cindy’s OK. When things start to crack in the rumor mill, and then even further, walking into the potential of, “Could this actually be true?” things really start to fall apart for Cindy Turner.

TVLINE | That insight that you get about what Cindy was like, and the relationship between her and Kate’s mom in high school: How does that inform what’s going on in the present? 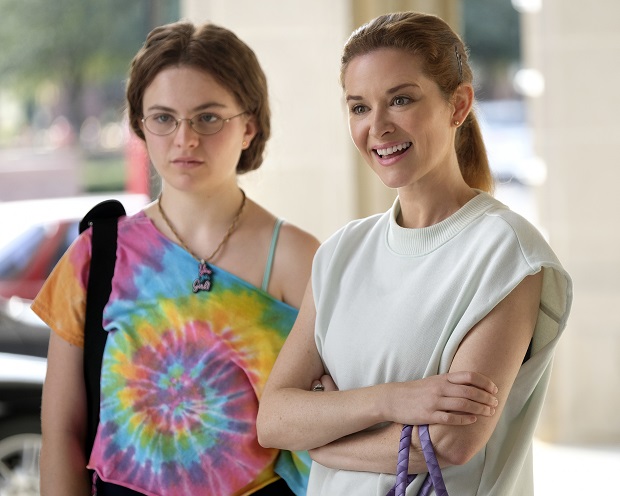 This show is so much about the power of perception. When I think about the scene between Joy and Kate in Episode 2, and then the scene between Jeanette and Cindy in Episode 3, it’s like the same conversation, except they’ve had completely opposite experiences. [Laughs] So from Joy’s perspective, she was the queen bee, and Cindy was desperate to be her, and all the boys wanted Joy. And from Cindy’s perspective, Cindy was the queen bee, Joy was desperate to be her, and all the boys wanted Cindy. It makes you, as a viewer, go, “OK, so is one of them lying? Or is one of them in denial? What actually happened? Who actually was the queen bee?” Or the other option is that they both had very different experiences of the same set of events that informed their memory and their perception of what their life was and is.

All of this stuff that’s happening [with Kate and Jeanette], so much of it is about perception, like, “Who is telling the truth? Maybe they’re both telling the truth? Maybe their experience is so different in their bodies… but they’re 100 percent sure that they’re right about it?” And the way that these two women play these scenes, and the way that it’s written, you, as an audience member, are very much like, “I don’t know who to believe, because I trust both of you.”

TVLINE | Is there a little bit of Cindy wanting to relive her youth through Jeanette?
Oh yes! She wants her daughter to be happy, but for Cindy, happiness equals being popular, beautiful and successful. For Jeanette, in ’93, she couldn’t care less about that stuff. It didn’t matter to her, but it mattered to her mom. So you begin to wonder like, how much influence did Cindy have on Jeanette and kind of moving her into the ’94 version of who Jeanette became? She’s literally living on top of the world because her daughter has now become the beauty queen that Cindy was, and I think Cindy maybe would have liked to have a bit more money to be able to go to the salon and just have whatever the hairstylist whips up instead of having to buy it out from the drugstore and apply it to her own head, like she reveals in Episode 2. [Laughs] There is an element of, “Well, my daughter’s doing OK. Well, if my daughter’s doing OK, then I can feel better about my life,” and I think that is a thing that moms struggle with in their relationships with their daughters, for sure, and always have.

TVLINE | As the allegations and the rumors start to ramp up, how does Cindy feel about Jeanette? Does she believe in her innocence?
She doesn’t know what to believe. Cindy is taking her own journey, much like the viewers are, as she is gaining pieces of information. At first, she thinks, “Oh, it’s just a rumor. It’s going to go away. It doesn’t have any staying power. It obviously isn’t true. So it’s just going to go away.” But then when her husband starts losing some work from it, and we get disinvited to parties, and things start to really begin to crack in our standing as a family in the community, it really forces Cindy to reckon with, “Has everything I’ve been living [been] a lie? If these rumors are true, then that would mean that I raised someone who could do something that horrible.” She can’t live with having been someone that has created a monster. There’s the betrayal of the relationship, but then there are the repercussions of that betrayal and how that affects their whole family and their whole standing. So things really, really start to fall apart for Cindy.