Coronation Street viewers have been begging the soap to end the coercive control storyline between Yasmeen Nazir (played by Shelley King) and Geoff Metcalfe (Ian Bartholomew) for months. It is almost a year since it began, and slowly, Geoff has been taking more and more control over his wife’s life. According to upcoming spoilers, there is a chance the situation is going to turn sinister

Yasmeen’s granddaughter Alya Nazir’s (Sair Khan) suspicion towards Geoff has increased over the past few weeks.

Recently, she expressed her concern about Geoff’s “advice” to Yasmeen, insisting she stay at home and rest after injuring her back.

To make matters worse, Geoff is making Alya out to be the enemy, writing scathing reviews online about her customer service in Speed Daal in a bid to purposely tainting her reputation and get her sacked.

Tonight, scenes will show Geoff lash out at Yasmeen once more, criticising the dinner she had created and banishing her upstairs to the bedroom. 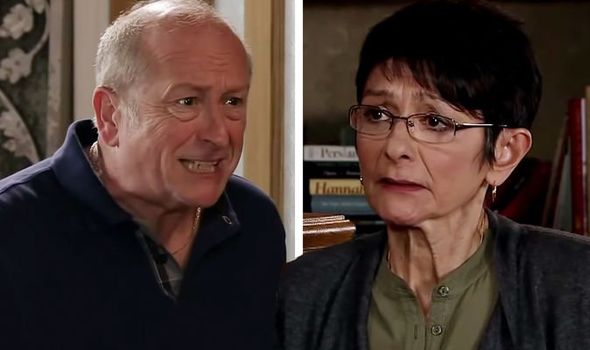 Filming images have teased a sinister act; Geoff to cook Yasmeen’s beloved pet Charlotte Bronte and serve it to that night.

And while this will undoubtedly infuriate viewers, many will be shocked at his next move, and how Yasmeen reacts.

Official soap spoilers for the next couple of weeks have been revealed and it will see a showdown between Geoff and Alya.

Having popped round to see her grandmother, Alya finds Yamseen outside near the chicken coop crying, and while a concerned Alya tries to find out what has upset her, Yasmeen can’t tell her the truth. 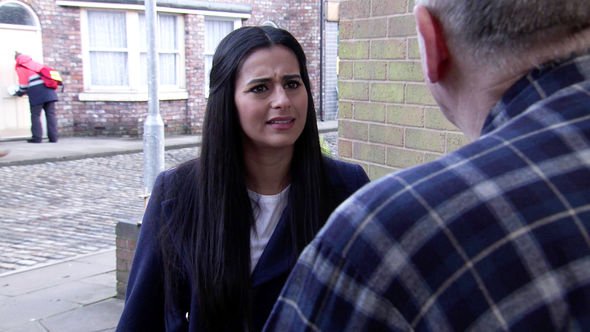 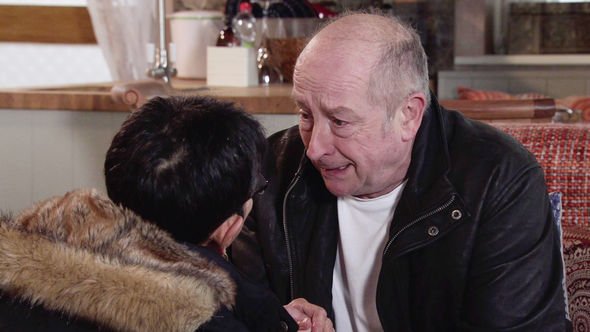 Realising she isn’t going to find out what really happened from Yasmeen, Alya pays Geoff a visit who is at his son’s Tim Metcalfe’s (Joe Duttine) house.

As usual, Geoff spins a lie – what exactly viewers will have to tune in and find out, but his evasive answer leaves Alya all the more worried.

In another scene, Geoff is scene rummaging through the cupboards and drawers downstairs until he finds Yasmeen’s passport.

However, he was moments away from being caught as Yasmeen arrives home and asks him why he is standing in the middle of the room looking guilty. 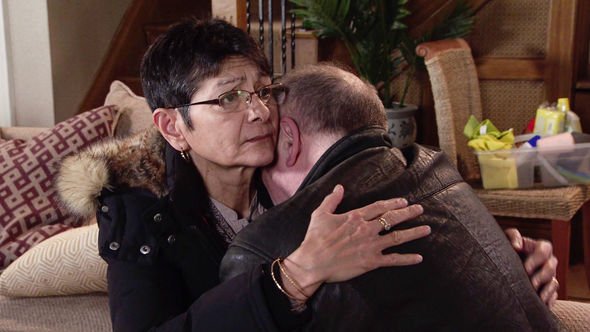 ITV viewers will see Geoff throw himself at his wife, crumbling as he explains he was under the assumption she had left him.

Unable to cope at the thought of life without her, Yasmeen is taken aback by Geoff’s confession, but nevertheless she comforts him.

But it seems her behaviour will only infuriate Geoff further, for when she reveals why she was out so long, he is not happy.

Yasmeen spent the afternoon having a leisurely walk with Alya, no doubt for her granddaughter to probe her about her marriage.

So what does Geoff want with his wife’s passport? Could this be another detail of the coercive control storyline?

Theorising the possibilities. it wouldn’t be surprising if Yasmeen was to be held captive by Geoff in her own home.

After all, he has stopped her from going to work, claiming she needs to rest her back, she barely sees her friends or family anymore, so her being trapped in the house all day by Geoff isn’t unlikely.

Fans should also remember the evil trick Geoff played on Yasmeen when he locked her in his magician’s box to teach her a lesson.