Coronation Street viewers have watched Geoff Metcalfe (played by Ian Bartholomew) abuse his wife Yasmeen Nazir (Shelley King) with his evil tricks worsening in recent months. From convincing her she was an alcoholic, to upping his attempts to isolate her from her friends, Geoff has put the once cheerful Yasmeen through hell. Now, the latest twist led viewers to call for an end to the storyline after they were horrified by his sinister actions tonight.

Yasmeen has carried on living in fear of her husband Geoff, who tricked her into marrying him late last year, much to the surprise of their respective families.

Geoff has continually tried to turn her nearest and dearest against her as he has had her cleaning the house all day when she is not at work, putting it down to a supposed dust allergy.

This week saw Yasmeen’s granddaughter Alya Nazir (Sair Khan) return to Speed Daal after she quit her job at the Bistro and Geoff quickly got to work trying to sabotage things.

He later left a bad review about Alya’s customer service, leaving her gutted at the feedback and it is clear she doesn’t trust him. 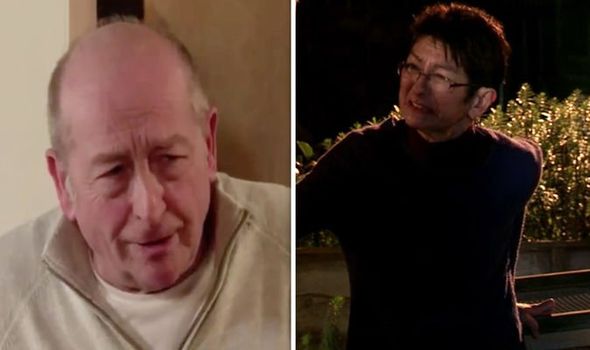 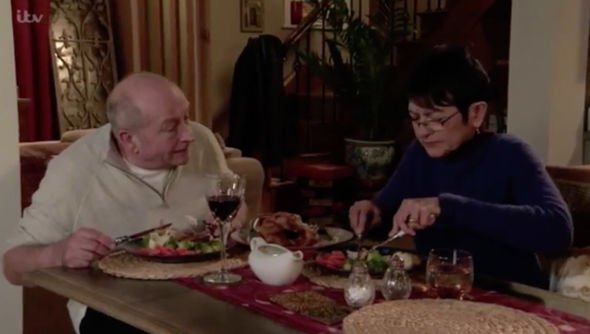 Yasmeen has done all she can to take care of Geoff but she had run out of money to cook a meal for the pair this evening, leaving the latter furious when she served a meal without meat.

Apologetically serving him, Geoff decided it was not good enough and he scraped his plate into the bin.

Geoff ordered her to go upstairs: “I’ll do it like I do everything else around this place, except look after your precious chickens. Get upstairs! Give me some space, I’ll call you when I’m ready.”

It became clear that Geoff had something sinister in store as he went outside and got his hands on Yasmeen’s chicken, Charlotte Bronte, shocking viewers.

As Yasmeen joined him back downstairs, she was shocked at the huge meal he had prepared for her but she quickly tucked into the roast chicken dinner. 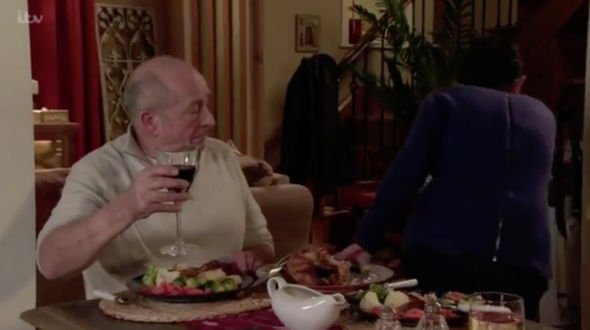 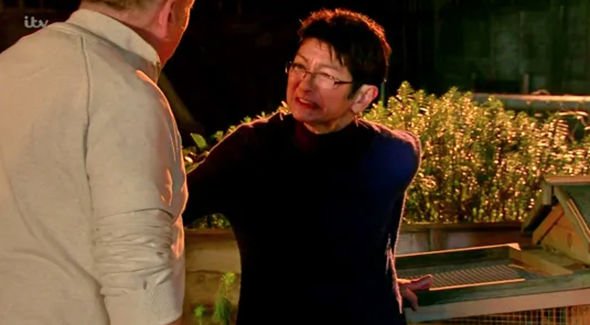 Geoff offered his wife gravy to go with the meal and she quickly gave her feedback on the food prepared for her: “Perfect, it’s not at all, not at all [dry]. Perfect. So tender.”

“Good, I thought she might be a bit dry being an older bird,” Geoff added.

It quickly dawned on Yasmeen she was in fact eating her own pet as Geoff added: “One last time, I’d like to raise a toast, to Charlotte.”

A horrified Yasmeen spat the food out after being left shaken by her partner’s actions.

He defended his decision, arguing: “I saved us money, I used our own chicken for food instead of buying one pumped full of water and chemicals.”

“If you hadn’t made such a hash of dinner in the first place, none of this would’ve happened,” and ordered her to do the washing up while he left for the pub.

“I wanted it to be a surprise! It wasn’t fun you know, killing and plucking, it was ruddy hard work, she put up a right fight,” he hit back.

Fans took to Twitter after the latest twist in the storyline this evening as they called for it to end, feeling it had gone “too far”.

One said: “This Geoff and Yasmeen storyline is way too much now. It needs ending and quickly #Corrie #coronationstreet.”

Another echoed: “Gone too far this time Corrie. Of all the ‘baddies’ on the street this is the worst but not in a good way. Get rid of Geoff. Hate this storyline #coronationstreet.”

A third wrote: “Right, that’s the last straw! Geoff has to go!!! #coronationstreet.”

“It’s definitely time for this Geoff storyline to end now #CoronationStreet,” added another.

A fifth commented: “Taking it way too far now #coronationstreet”

With Alya continuing to grow suspicious of Geoff’s actions towards her grandmother in episodes to come, will she finally manage to put an end to her horrific ordeal?

Coronation Street continues on Monday at 7:30pm on ITV