Can Disney’s Streaming Growth Make Up for All the Other COVID-19 Problems?

Disney may have 99 problems, but streaming isn’t one of them.

Amid the dour earnings results, the early performance of Disney+ provides at least one reason for sunny optimism in the Magic Kingdom. The streaming service, which launched in November, has amassed 54.5 million subscribers as of May 4, leapfrogging Hulu in subscribers and even challenging Amazon to be the No. 2 streaming service behind Netflix.

More importantly for Disney, it puts it on track to reach the subscriber goal the company set out for itself — four years ahead of schedule. Unfortunately, it’s probably not going to compensate for the myriad of challenges Disney will face in the months ahead.

“Disney’s significant investment in streaming is a bright spot for the company that could help it mitigate some of its shortfalls, but it alone can’t propel the company past all of this adversity,” said eMarketer analyst Ross Benes. “Disney+ quickly amassed an impressive number of subscribers, but its impact on the broader company is limited as long as theaters and theme parks stay closed. This is because the streaming service, like so many other Disney products, generates the most revenue when it can be used to cross-market other company properties.”

While Disney+ is off to a better start than even Bob Iger on his most optimistic days could have imagined, the rest of 2020 looks to be dire for Hollywood’s biggest player.

Disney is coming off a quarter in which it saw its profit plummet by 91%, its earnings fall to a measly 60 cents a share, and an estimated $1 billion negative impact on the company’s biggest revenue driver in theme parks due to the coronavirus pandemic. And its prospects appear to be even more grim during its next quarter when the full brunt from the economic havoc caused by the global health crisis will make its presence felt on the company’s balance sheet.

Not exactly the best way for Bob Chapek to start out his tenure as Disney CEO.

Though the pandemic has slowed somewhat in Asian countries — leading to the planned reopening of Shanghai Disneyland next week — it is still raging on in parts of Europe and, most importantly for Disney, the United States. That leaves the company in a massive state of uncertainty as to when its two largest revenue streams — its parks and events business and box office — can return.

Additionally, its most profitable TV network, ESPN, is hampered by the lack of live sports, while its upcoming fall programming lineup on ABC is murky at best. Disney CFO Christine McCarthy said on Tuesday that they are seeing a “significant decline” in advertising sales, mostly at ESPN, which normally would be in the middle in the NBA playoffs and a month into the MLB season. Even the NFL’s upcoming season in the fall is on shaky ground.

The production shutdown could end up impacting Disney+, which is supposed to get its first two series from Marvel Studios at the end of the year, as well as the second season of “The Mandalorian.” 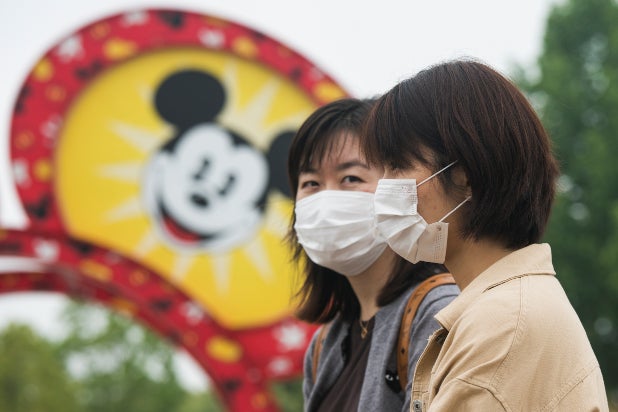 Shanghai Disneyland will reopen on May 11, but with severely reduced capacity (Hu Chengwei/Getty Images)

“The COVID-19 pandemic transformed some of Disney’s greatest strengths into its greatest vulnerabilities,” Benes said. “Theatrical releases and theme parks, long-time profit centers for the company, are losing money in the short-term and have no clear path to recovery until improved treatments or vaccines make consumers comfortable to venture back out into large crowds.”

Outside of Shanghai Disneyland, which will operate at less than half of capacity, the reopening of movie theaters will be closely watched by Disney. “Mulan” is still on track for its July 24 release date, but it’s not clear how movie theaters will operate (though likely with reduced seating) or even if movie-goers will feel it’s safe enough while the disease still figures to be in the picture.

Chapek said they’ll be paying attention to the performance of Warner Bros.’ Christopher Nolan film “Tenet,” which is supposed to hit theaters a week before “Mulan.” Chapek said that will give them a good indication of what to expect, though he optimistically believed there has “got to be incredible pent-up demand” for going to the multi-plex.

But with July 24 more than two months away, it’s not at all certain what state the United States and other countries will find themselves in.

“People will want to return to theme parks, watch the newest Pixar film in a movie theater and spend hours – countless hours – at home watching ESPN,” analyst Michael Nathanson wrote on Wednesday. “The debate, for us, is about the duration of this downturn and the lasting damage it may have on key traditional drivers like affiliate fees, TV advertising and theatrical attendance.”

Then there’s the question of when Disney’s film and TV productions can even resume filming, and what that will even look like when they do. Chapek told analysts that the company currently has no projections on when films like Marvel’s “Shang-Chi and the Legend of the Ten Rings” will get back on track. When they do, however, he said it’s likely they’ll take as many lessons as they can from reopening and operating the parks. “We will be very responsible in terms of masks and the same type of procedures that we would hope to implement into our parks.”

Beyond that, the coronavirus pandemic could certainly have long-lasting effects on the company’s film unit as it evaluates how best to produce and, more importantly, distribute its content. Chapek told investors that Disney, one of the staunchest defenders of the theatrical model and traditional release windows, might have to start taking a second look at how it distributes some films post-COVID-19.

“We very much believe in the value of the theatrical experience overall for large blockbuster movies,” Chapek said. “We also realize that either because of changing and evolving consumer dynamics or because of certain situations like COVID, we may have to make some changes to that overall strategy just because theaters aren’t open or aren’t open to the extent that anyone needs to be financially viable.”

Chapek’s remarks were in response to a dust-up, mainly between exhibitioners and Universal Pictures, which following the successful streaming and on-demand release of “Trolls World Tour” said that it would release more films on both streaming and in theaters, even after cinemas are able to open their doors again.

Trey Williams contributed to this story.