Raj Koothrappali (played by Kunal Nayyar) quickly became a favourite among Big Bang Theory viewers following his introduction in the CBS series pilot. Along with close pals Howard Wolowitz (Simon Helberg), Sheldon Cooper (Jim Parsons) and Leonard Hofstadter (Johnny Galecki), the quartet found themselves in a number of hilarious predicaments but it was particularly funny when Sheldon’s mother Mary (Laurie Metcalf) came to town. However, in one scene involving both Mary and Raj, eagle-eyed fans have spotted a glaring continuity error.

The blunder in question comes in the fourth episode of the very first season, titled The Luminous Fish Effect.

In the Big Bang Theory instalment, Sheldon has been let go from his job at Caltech University for disrespecting the new head of physics, Eric Gablehauser (Mark Harelik).

As a result, Sheldon feels the need to occupy his mind with a bizarre series of unique hobbies.

From a bizarre scrambled egg experiment to to trying to create luminous fish night-lights, Leonard feels he has no choice but to get Mary over to sort her son out. 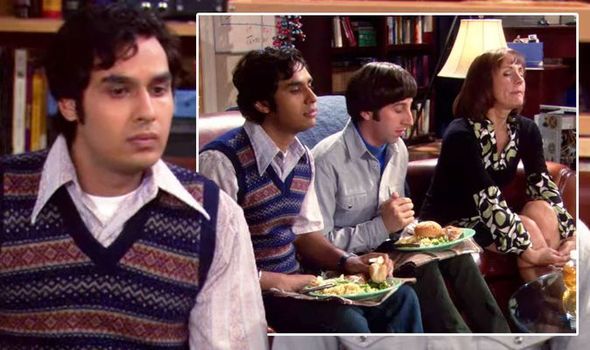 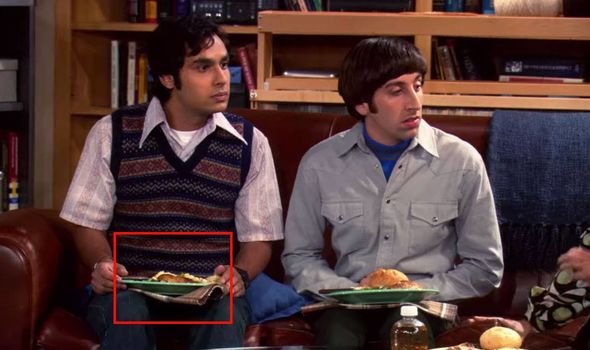 Mary arrives and tries to snap Sheldon out of his funk but it proves a trickier task than expected.

Upon her arrival, Mary decides to cook a communal dinner for the guys and neighbour Penny (Kaley Cuoco).

However, Sheldon stays in his room away from the group, still annoyed Leonard employed his mother to try and help him out of his current state.

So when does the continuity error occur? Well, it comes when the group hastily forget to say grace before tucking in. 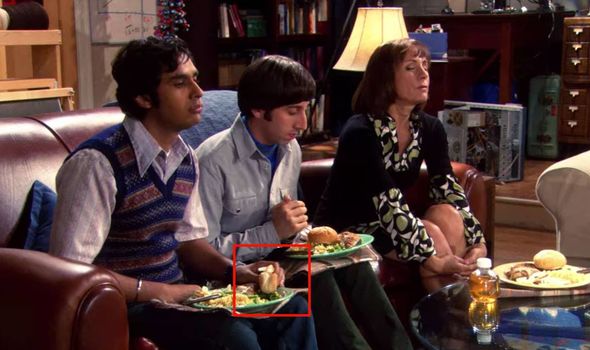 As they sit down in the living area, Mary makes Leonard and Penny uncomfortable suggesting they’d make a good couple.

To break the ice, Mary tells everyone to tuck in, which they accordingly do.

Howard, Penny and Leonard shovel the food into their mouths with a fork while Raj takes a bite out of the roll in his hand.

However, Mary begins to say grace and puts an abrupt halt to them eating.

But one eagle-eyed fan has spotted on forum moviemistakes that Raj’s roll changes hands in a split second.

In the blink of an eye, the roll Raj had just taken a bite out of swaps from his right hand to left.

And the continuity errors don’t stop there as the bread roll vanishes completely and then reappears when Mary tells Raj and Howard they don’t have to join in.

“Now, after a moment of silent meditation,” she begins. “I’m gonna end with ‘In Jesus’ name,'”

She concludes: “But you two don’t feel any obligation to join in.”

It’s at this point the plate on Raj’s lap changes layout a number of times.

The Big Bang Theory is available to stream on Netflix UK now.