Chief stew Jenna MacGillivray from Below Deck Sailing Yacht has been hit hard on social media for her tough as nails management approach. 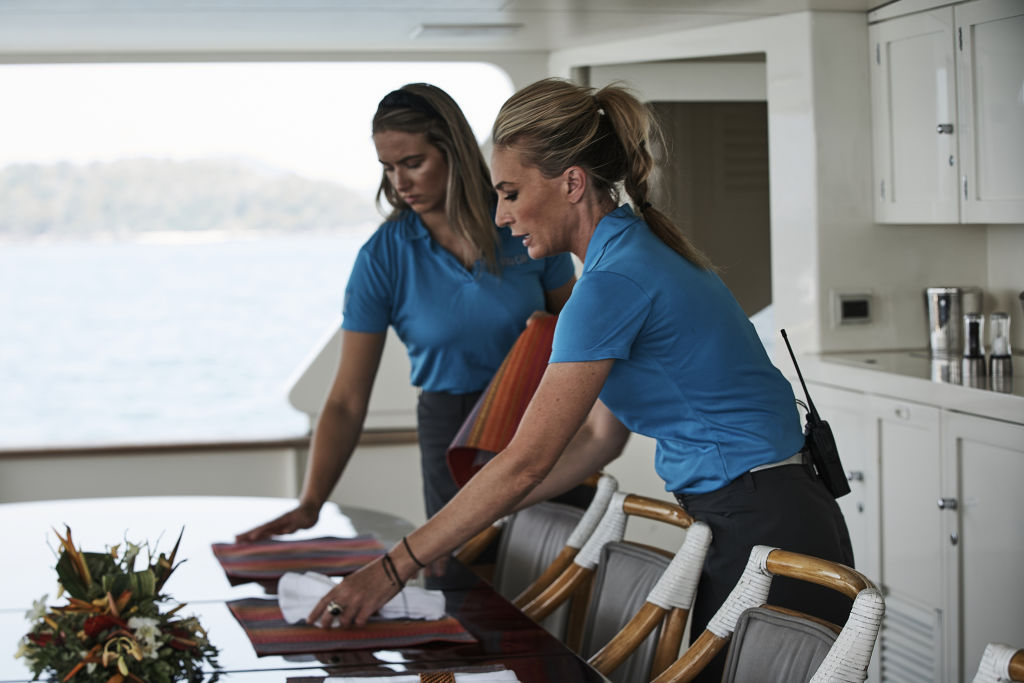 She’s dealt with remarks ranging from her appearance to being called names. MacGillivray confronted the backlash she’s received in an Instagram post, admitting the anger has shocked her. “Being part of this process has really opened my eyes to the type of bullying and cruelty that exists online in a way that has shocked me,” she wrote. “I am on a show. I agreed to share myself with the world and all that comes with it, however, I will remind people that I do not support abuse when I can stop it. So when people send abusive messages (that are literally repulsive to read), I will not listen to that.”

Stew Courtney Skippon from Below Deck is someone who can empathize with MacGillivray. While she didn’t receive the same hate from fans, she went to war on Twitter with former flame, Brian de Saint Pern. She recently spoke up on MacGillivray’s behalf, essentially telling fans to cool it.

She reminds fans that people on reality television have feelings

Social media can be especially harsh as some viewers don’t think twice about lobbing hateful messages from behind a keyboard. When fans shared that MacGillivray was “mean” Skippon disagreed. She added, “I know Jenna personally, so my opinion is based on that. I just think it’s important to practice making softer judgments about people, especially those we only see briefly on TV.”

Hi guys! Just your friendly neighborhood villain here….taking a break from polishing the one wine glass I own, 234,567 times, because I miss working on Parsifal. I’m hoping everyone is doing well in these crazy times, and focusing on what matters most to you. 💕

She continued, “Those who have never worked on a yacht might have a hard time understanding her management style – but there really isn’t time for nonsense. Things aren’t always as black/white as they appear on TV, and I just hope people can start to consider that when making their assertions.”

Skippon also reminded fans that hours of footage are not seen so making a rash judgment is unrealistic. “99.9% of the work that I did didn’t air – that’s not bc I wasn’t working hard, it’s bc other parts were more interesting (like the development of a relationship btwn cast or certain personality traits). While things can’t be manifested from nothing, things can be left out.”

Skippon doesn’t disagree that viewers are entitled to their opinions. However, she wishes people would opt for less abrasive language when expressing them. “I’m saying that while everyone is entitled to opinions, there should be more practice in using soft language & openness to exchange of views rather than the aggressive & often extremely unkind assertions I see being made online – especially from those w only a secondhand account,” she continued with her Twitter thread.

Lowkey crying over how adorable these #BelowDeck and #BelowDeckSailing crew members' furry friends are! 😭 #NationalPetDay

She even offered an example. “Eg. instead of saying “Jenna’s a mean girl” (inflexible assumption based on a secondhand view of edited events), they could have said: I didn’t like how she did x,y,z, here’s why, what are your thoughts? The former presents an opinion as objective truth & frankly just isn’t nice.”

MacGillivray added to the thread, revealing she offered stew Madison Stalker support. “I’ll tell you this, after that exchange. I wrote Madison a letter of support and the camera showed it, but it didn’t make the episode.”