Ant and Dec have returned to bring more light-hearted entertainment to weekend night’s with Saturday Night Takeaway, overseeing a number of segments on the show to keep viewers watching. However, this evening’s edition featured an unfortunate blunder as the I’m A Celebrity…Get Me Out Of Here! hosts left ITV viewers questioning what was going on with regards to one particular segment.

One of the most popular segments on the show sees celebrities undertake secret tasks given to them by the presenters through an earpiece.

The segment, who’s name is a playoff of the jungle-based reality show, leaves viewers ins stitches as the all-stars embarrass themselves in front of members of the public.

Tonight’s second instalment of the hit series featured heavyweight champion Anthony Joshua, 30, in the hot seat as he took orders from the Geordie duo.

However, when introducing ‘I’m A Celebrity…Get Out Of My Ear!’, Ant accidentally announced the name of the pair’s other programme. 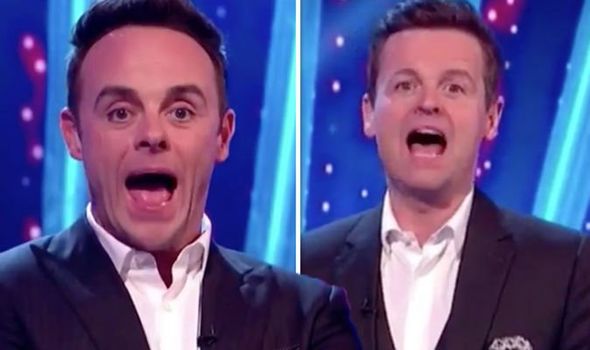 Taking to Twitter, viewers were left rather confused by the blunder, with one writing: “What happened there, Ant and Dec both said different things #SaturdayNightTakeaway.” [sic].

Another added: “Did one just say “get me out of here?” Dreaming of the jungle #SaturdayNightTakeaway,” whilst a third commented: “What is it with @antanddec and saying ‘I’m A Celebrity Get Me Out Of Here!? #ImACeleb.”

A fourth shared: “What the hell was that? Cannot talk anymore, @antanddec? #SaturdayNightTakeaway,” followed by several laughing face emojis.