GMB: Richard Madeley teased by Andi over his son's wedding

Richard Madeley returned to the GMB studio on Tuesday as he continues to fill in as guest host alongside show stalwart Susanna Reid. Also back in the studio was the competition segment presenter Andi Peters, and it didn’t take long for the ITV stars to become embroiled in some rather tongue-in-cheek exchanges. However, when Andi took aim at Richard’s son’s plans for a wedding in the light of prime minister Boris Johnson’s delay to ‘Freedom Day’, Susanna stepped in.

Prior to Monday’s announcement that Covid restrictions would remain in place for a further four weeks after June 21’s initial target, Richard had been telling his co-stars his angst surrounding his son’s upcoming nuptials.

Richard had revealed he and his family were on edge about what would be allowed and what wouldn’t be following Mr Johnson’s news conference on Monday evening.

But after Richard teased Andi upon his return to the GMB studio, the long-serving competition host took aim at the former This Morning star’s persistent chat on the matter.

The moment came as Richard began to tease Andi, telling ITV viewers: “All of the artwork that’s dotted around the dressing rooms, in particular, 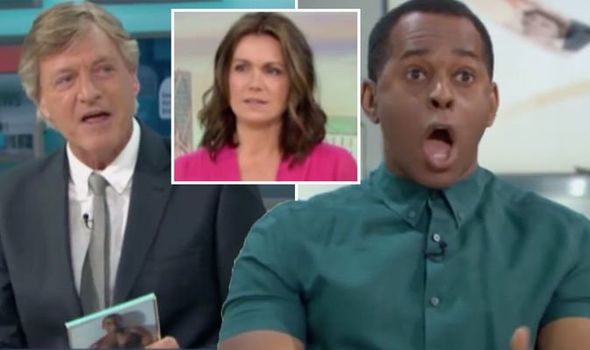 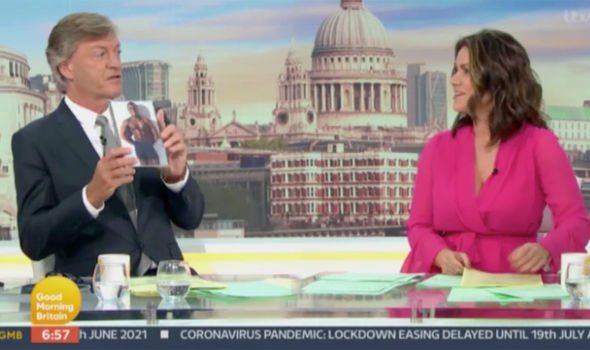 “I saw some fabulous artwork,” Richard joked as he pulled out a photoshopped snap of Andi topless with a ripped physique.

Andi let out a giggle as did Susanna and Ranvir Singh before Richard continued: “That was on my coffee table.”

“Richard, that was ob your rider,” Susanna weighed in as she began to tease he co-host. “Don’t deny it.”

And spotting his own opportunity to mock the GMB host, Andi let loose. 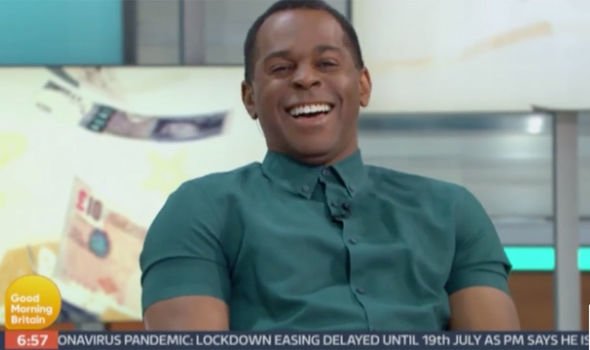 “I had to clear that with my management,” he began. “They said ‘Richard wants a picture of you shirtless in his dressing room so he’s got a body to aim at for the wedding that he keeps going on about’.”

The GMB panel let out a laugh at the swipe as Andi continued: “Blimey! Are you going to a wedding by any chance?”

A sheepish Richard saw the funny side of Andi’s putdown as he commented: “I deserve that.”

But Susanna felt sympathy for her co-host after Andi’s savage swipe, warning her co-star: “Aw, don’t rain on his parade!”

“It’s a happy family event,” she added as Andi began to backtrack.

“I watch this show every day, like our viewers,” Andi replied. “And I’ve just been thinking, oh, I think he’s going to a wedding.”

Picking up his phone, Andi said: “I was like, ‘Mum, Mum, Richard Madeley’s going to a wedding’.”

Luckily, Richard did see the funny side of the exchange, despite being shown up by Andi.

And viewers at home similarly enjoyed Andi’s mischievous behaviour, with one commenting on Twitter: “That’s why I love this program. It’s not all negative as people make out.

“Andi Peters saying to Richard ‘are you going to a wedding soon’ [laugh emoji].”