Home » TV and Movies » AMC Networks Is Worth Half Its 2015 Value: Whats Its Future Beyond Walking Dead Spinoffs?

This year, AMC Networks will end three hit series — “Better Call Saul,” “The Walking Dead,” and “Killing Eve” — and replace them with an army of undead I.P. There’s “Interview With a Vampire” starring Eric Bogosian, and “Mayfair Witches,” led by Alexandra Daddario, both from the Anne Rice universe, along with next month’s return of “Fear the Walking Dead” and new episodic anthology series “Tales of the Walking Dead” later this year.

Next year their legions will grow with “Isle of the Dead,” starring popular “Walking Dead” alums Jeffrey Dean Morgan and Lauren Cohan, as well as a previously announced “Walking Dead” spinoff returning Norman Reedus and Melissa McBride. All told, that makes for five spinoffs of the original “Walking Dead” series. (“The Walking Dead: World Beyond” ended last year after a two-season run.)

Filling the shoes of long-running O.G. “Walking Dead” is a tall order — in its heyday, it was the highest-rated series in the history of cable television — but this precarious scenario isn’t unfamiliar to AMC. When the channel-defining series “Breaking Bad” and “Mad Men” ended, in 2013 and 2015, respectively, the future of AMC Network faced similar concerns. The 2010 launch of “The Walking Dead” proved that AMC was more than a two-show channel.

Zombies aside, what remains to be seen is if AMC can retain its status as a prestige programming provider. AMC Networks, the bundle of cable channels (AMC Network, BBC America, IFC, SundanceTV, WE tv, and IFC Films) and streaming services (AMC+, Acorn TV, Shudder, Sundance Now, and ALLBLK) are also returning “Kevin Can F**k Himself,” Gangs of London,” and “Kin.”

In addition, AMC has greenlit new series “61st Street,” “Dark Winds,” “Moonhaven,” and “Pantheon” for 2022-2023, as well as “The Driver” starring “Better Call Saul”/”Breaking Bad” standout Giancarlo Esposito, “Demascus,” and “Invitation to a Bonfire” for 2023.

Under the deal struck with the late Rice, AMC can develop film and television projects from any of the prolific author’s 18 titles spanning book series “The Vampire Chronicles” and “Lives of the Mayfair Witches.” 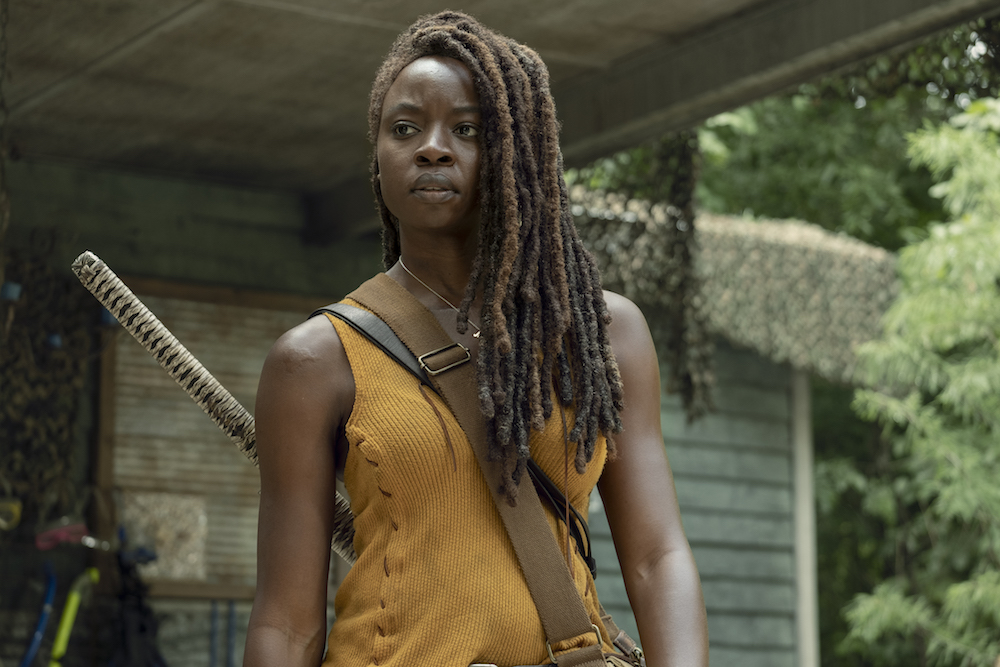 Danai Gurira in “The Walking Dead”

In the decade-plus since the debut of “The Walking Dead,” its massive success also proved to be an outlier: Short of NFL football and maybe Paramount Network’s “Yellowstone,” almost nothing on linear television today comes close to what the zombies drew in terms of audience size. AMC has leaned into the new reality of cord-cutting and audience fragmentation by investing in diverse, niche streaming services.

“We’re growing a business that is less speculative, less costly, and more sustainable than larger players trying to deliver something to everyone in a household,” AMC Networks’ interim CEO Matt Blank said on the company’s February earnings call. “Simply put, we’re not trying to be something for everyone. We are instead trying to be everything to someone.”

Specialty programming tends to make slow strides in terms of overall growth and Wall Street doesn’t care much about the “everything to someone” approach when the someone pays, at most, $8.99 per month – the cost of AMC+ (it also includes access to Shudder and Sundance Now). Acorn TV, a platform dedicated to mostly British programming, is $6.99 per month, as is Sundance Now; ALLBLK costs $5.99 and horror streamer Shudder is $4.75.

AMC Networks has a market cap just over $1.7 billion, which represents about half the company’s valuation from its 2015 heyday. To the merger-hungry industry, $1.7 billion represents a snack: On Thursday, Amazon wrapped up its $8.5 billion deal for MGM. The pending WarnerMedia-Discovery merger, which should close in a couple of weeks, was a $43 billion pact and the newly created company is believed to be worth more than twice that.

With longtime AMC leader Josh Sapan out of the picture (he stepped down last summer) and 71-year-old Matt Blank holding the title of “interim CEO,” an AMC Networks acquisition would unlikely feature any corporate posturing for the (hypothetical) parent company’s C-suite.

There’s just one problem here, and it’s the same one New York Knicks and New York Rangers fans have battled since the ’90s: James Dolan. The Dolan family, the same one that owns the generally lowly Knicks (no championships since 1973) and the Rangers (no titles since the 1993-94 season; the Dolans purchased the team shortly thereafter), holds 100 percent of AMC Networks’ Class B super-voting shares, which means they can block any such acquisition attempt.

Charles Dolan, James’ dad, spun off AMC Networks from the family-owned cable-provider company Cablevision (since sold to Altice) in 2011. Charles stepped down as AMC Networks chairman in 2020, handing the reins to James. For those who don’t bleed blue and orange, just ask Knicks (currently 12th place out of 15 teams in the NBA’s Eastern Conference) fans how the James Dolan era has gone for them — no one wants the same for AMC.