Home » Almost Nothing About The Bold Type Was Realistic. That’s What Made It So Great.

As a romance writer, I’m a sucker for a love story. And as a romcomoisseur (some say, ‘self-proclaimed’, I would not), I’m a sucker for a romantic comedy. And as someone who is healthily vain and occupationally self-obsessed, I particularly enjoy the Media Gal RomCom genre and inserting myself as the Main Character—which, ironically, is why it took me so long to watch The Bold Type. I assumed it was over-indulgent, perhaps ridiculously, so; sickeningly sweet and gauchely glossy. Plus, many people recommended it to me. And as a petulant curator of my own tastes, this was enough to turn my nose at it. Three media gals taking on New York City by way of Toronto? Give me a break, I said, while watching New Girl for the 656th time.

Then, the series arrived on Netflix, and deciding to broaden my tastes from a downtown L.A loft with one kooky girl and three goofy men (not a porn), I clicked. I was right about certain things, of course, because I am never truly wrong. The Bold Type can be ridiculous. It is a world in which a newbie writer directly reports to the editor-in-chief and forges an unbelievably tight bond. But The Bold Type also accomplishes the difficult balance of delightful froth that never becomes cloying with substance that rarely becomes stodgy. The two elements heighten and complement each other in such a way that the viewer can enjoy both gleefully. We are fully invested in the kitsch replica of a media metropolis where the editor-in-chief cancels an anniversary dinner to cajole Kylie Jenner into a cover shoot and Scarlet’s crop-top wearing social media director’s ascends into wokeness. 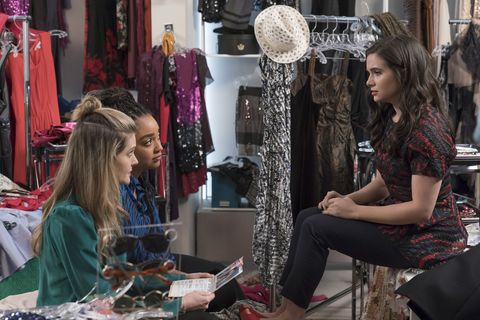 The heels are high and the fashion tries its hardest to be. These Media Girl RomCom (™) trappings could make your teeth ache if consumed in their discrete parts, however, ensconced within Forever 21 ruffle necks, Steve Madden ankle boots, and semi-vacuous How-To assignments, The Bold Type is pure and nutritious heart-warming, and its beat, is the clickity clack of the heels worn by Jane Sloan, Kat Edison, and Sutton Brady as they navigate 20-something life and ambition, arm in arm. The alchemy of these characters and their chemistry is nothing short of a deft art, with Jane the highly strung writer who is eager to please EiC of fictional Scarlet Magazine Jacqueline Carlyle (played by Katie Stevens in a rather transparent projection of mommy issues); privileged, unencumbered and headstrong Kat (Aisha Dee); and gutsy, ambitious, fun-loving Sutton (Meghann Fahy). These women balance each other out and grow together, their friendship imbued with such tangible humor and affection, that when one utters “fashion closet now,” you push your metaphorical desk-chair back to follow them, sit on a pink pouf, and ask, “Girl, what’s up?”.

This is no doubt, also a credit to the actresses who bring soft nuances to characters who could so easily veer into archetype. Whilst Tiny Jane, can be annoying in her steely earnestness, Stevens softens it with a gilt of sweetness. Jane so clearly wants control because so much of her life has been out of it. Kat could easily be a brat, but Dee plays both her naivety and single-minded determination with a layer of vulnerability and interiority. Despite the veneer of confidence, we know that Kat has more to give and to be. And there is sex-positive Sutton, whose quick humor is saturated with unadulterated adoration for her friends. Fahy’s character hums with affability that twines delicately with her toughness. Fahy carries emotion masterfully without being overwrought.

These women balance each other out and grow together, their friendship imbued with such tangible humor and affection.

Their friendship sings, they are each other’s people, and throughout various romantic relationships that we may or may not root for (Pinstripe), the trio’s love story is what we stay for. Not only do these women cheer each other on, they do what all Great Loves should do which is challenge each other into growth. Yes, Jane should check her privilege, and yes Kat, you should too. And Sutton, girl, why do you have a gun (no, but really….why?). They also comfort each other. Kat navigates her sexuality with the full support from her girls while Jane embarks on her BRCA diagnosis with them holding her hand. Sutton loses the love of her life knowing that she still has the true loves of her life by her side. 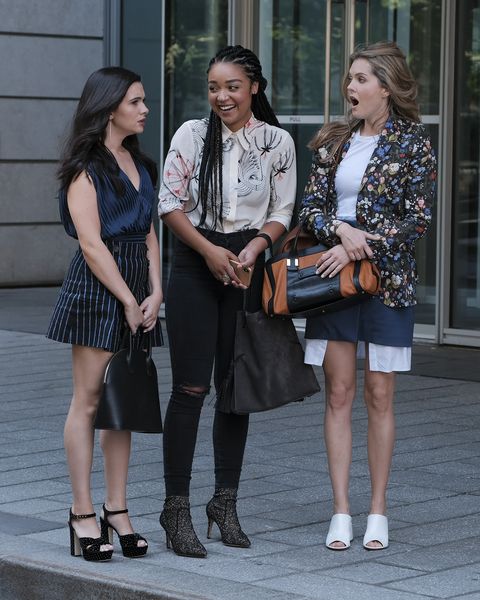 Part of the credibility of The Bold Type universe lay in its ambitious exploration of serious topics through the prism of Scarlet Magazine. Racism, immigration, corporate corruption, and the Me Too Movement are all addressed with valiant effort. However, The Bold Type didn’t always get it right. Its exploration of issues sometimes became heavy-handed at best, offensive at worst, with no real consideration of its own well-developed characters. Again, why did Sutton have a gun? What exactly is going on with Kat and the Black side of her family? Why would Kat, after all her brilliant evolution, sleep with someone like Eva who is not only the anthesis of her values, but actively supports something so harmful? It is an issue that Aisha Dee herself has spoken about, criticizing the show for its evident lack of diversity in its writer’s room and compromising their own well-drawn characters.

Not only do these women cheer each other on, they do what all Great Loves should do which is challenge each other into growth.

Ultimately, though, the series constructs a world that we want to believe in by joyfully manipulating tropes, eliminating snark, and populating it with fully formed figures. Richard and Sutton could have been a sleazy work-place affair with dubious power dynamics, but their relationship—though sexy—was also sweet and mellow thanks to Richard being unendingly supportive, allowing space for Sutton to be herself. Jacqueline was teased as a cold Miranda Priestly pastiche, but with good writing and the dexterous work of Melora Hardin, she was revealed to be a firm but kind mentoring force in the lives of the core trio. 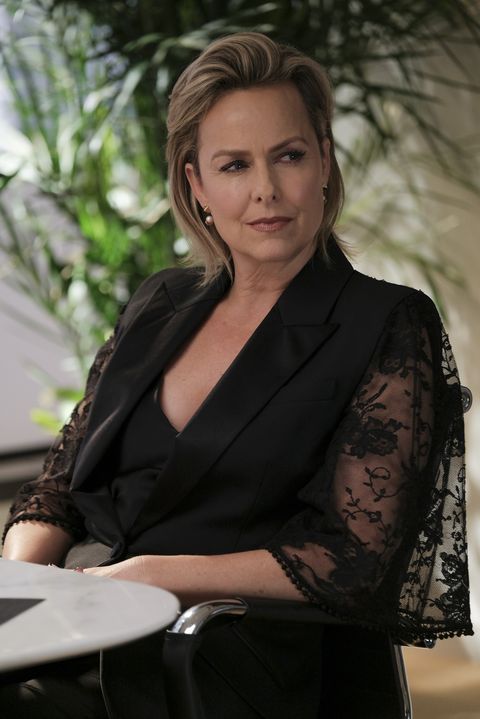 It is perhaps, then, a testament to the accomplishment of the show, that despite this, (and some choice decisions in Season 4) I am still here. I am rooting for The Bold Type like it is a flawed friend who is sometimes tactless but whose heart is ultimately in the right place. I am rooting for it because this is a series about love, about discovering what we love and who we love, and holding it dear. I love this show. And writing this piece, like I, myself am Tiny Jane, I am reconciling myself with its end in the knowledge that whatever happens, the girls’ love for each other will not.