Things I expected when I sat down to watch Outlander this week: Roger making terrible decisions, Claire and Jamie having passionate sex in front of a roaring fire, and perhaps a shot of an eagle majestically soaring over Fraser’s ridge because AMERICA. Things I didn’t expect? This show to delve into what can only be described as body horror. But here we are! Outlander truly went there this week, and by “there” I mean a dark place full of maggots, deranged and possibly psychotic goats, and rotting flesh. Let’s get right into it I guess!

First of All, Claire’s Still Out Here Making Penicillin.

She basically spends her time surrounded by moldy bread, and honestly it looks extremely dangerous and I have a lot of concerns. Especially since Claire’s taken to saying dramatic things in voiceover like, “I was daring history to try and stop me.” Like … please calm down, Claire!

Fortunately, The Saga of Claire’s Mold™ took a backseat this week, but everything should go wrong soon considering Fergus seems to have accidentally grabbed part of her recipe to use as scrap paper. Unclear what’s going to happen with that classic mix-up, but in the meantime I’ll just be here doing this:

An Update on the Regulator Drama

I know everyone just wants to get to the goats and body horror, but in case you’re extremely interested in what’s going on with the Regulators, Jamie, Roger, and Claire leave Fraser’s Ridge to gather a militia. Obviously, they don’t want to fight against Murtagh and the Regulators—but Jamie’s hoping a big show of force will inspire them to step down.

Oh, and while they’re on the road, Jamie tells Claire that Stephen Bonnet is still alive. Genuinely confused as to why Jamie thought it was a good idea for all of Brianna’s loved ones leave her at home given this alarming info, but okay!

Remember Josiah? Well, Plot Twist: He Has a Twin.

You may recall that back in the Season 5 premiere, Jamie took in a kid named Josiah Beardsley. Well, it just so happens that Josiah and his surprise twin are both indentured servants on the run from their master, Aaron Beardsley—so Claire and Jamie head on over to his house with the intention of procuring their indenture. What could go wrong? Oh wait, everything! 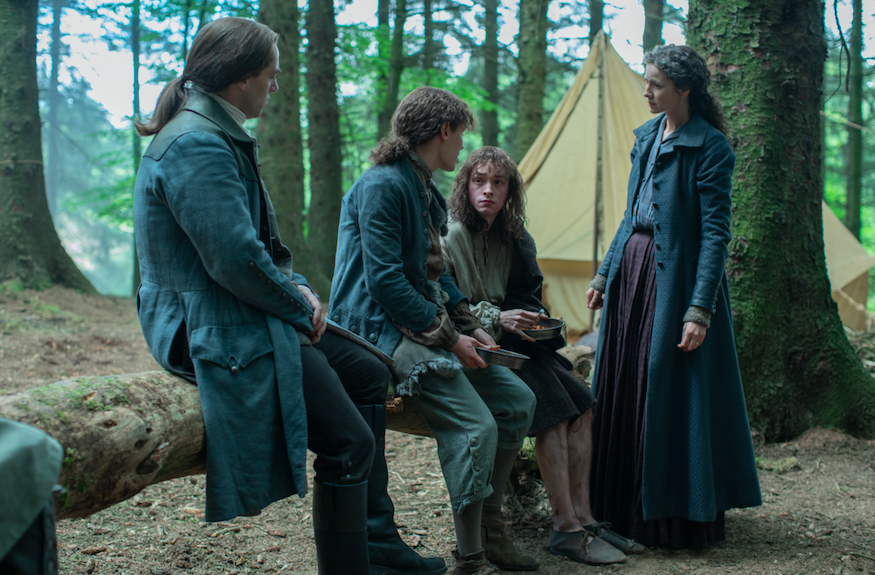 Upon arriving at the house, Claire and Jamie are greeted by Beardsley’s wife, Fanny, who seems highly suspicious. The entire house smells terrible and is full of seemingly haunted goats, and—due to being predictably nosey—Claire wanders upstairs without permission and discover’s Beardsley’s body. He had a stroke a few weeks back and Fanny has been letting him lie in his own filth while she tortures him. Claire does her best to clean Beardsley’s wounds and we get a ton of extremely gruesome shots of his injuries. I’d honestly rather re-watch Roger play guitar in a turtleneck than see maggots crawl out of a person’s body, and that’s saying a lot.

In fact, let me just:

The situation heightens when Claire and Jamie find Fanny trying to strangle Beardsley (turns out he was abusing her, so she had her reasons) and in the scuffle her water breaks. Surprise! She’s pregnant! And two seconds later, Claire is delivering a baby while the goats are all, “What. is. even. happening.”

Fanny isn’t ready to embrace motherhood, though, because she peaces out in the middle of the night—leaving Claire and Jamie with her newborn. The episode ends with Jamie straight-up killing Mr. Beardsley to put him out of his misery, while Claire cares for the baby and rounds up our new sinister goat friends. Oh, and Jamie also tells Claire that if he’s ever suffering in the same way as Mr. Beardsley (who had apoplexy as a result of his stroke, much like Jamie’s dad), she has to promise to kill him.

Just another casual episode of Outlander!