Home » TV and Movies » '90 Day Fiancé': Brittany and Yazan to Have 'Explosive' Confrontation

90 Day Fiancé‘s latest spinoff, 90 Day Bares All, is giving fans an unprecedented behind-the-scenes look at everything the popular TLC franchise couldn’t show you on TV.

ET got the exclusive first look at the set of the highly anticipated companion show hosted by Shaun Robinson, which starts streaming on Jan. 4 on Discovery Plus. The show will feature guests both in the studio and virtually from around the world, including 90 Day Fiancé favorites Angela and Big Ed, and will also feature plenty of juicy footage too racy for TV.

“This is the space where we are showing you every single thing that we could not show you on regular TV,” Robinson tells ET’s Melicia Johnson. “There’s so many things — video, certain confrontations, language, body parts — that we can’t show you on regular TV, but we can show them here. Bares All is basically that — we are taking everything and, not that they were left on the cutting room floor, these parts are really juicy, but because of the rules, we could not show you there. Here, we can show you absolutely everything, so Bares All is the perfect title for this show.”

Robinson teased the incredible interviews to come, including that the show was able to bring together estranged brothers Tarik and Dean, who hadn’t seen each other for over a year. The two were favorites on 90 Day Fiancé: Pillow Talk due to their hilarious commentary, but suddenly stopped appearing. Tarik later claimed to ET that their fallout occurred after Dean tried to get him fired off the show because he wanted to be the star. Robinson said the two do hash it out on the show.

Robinson also revealed that the show is going to have an “explosive” confrontation between 90 Day Fiancé: The Other Way season 2 stars Brittany and Yazan, as well as his family. During their season, Yazan’s dad kicked him out of the house and fired him due to his decision to stay in a relationship with Brittany, after family members discovered racy social media pictures she had posted in the past. Yazan’s dad threatened to kill Yazan himself.

“We knew from the beginning that that was a dead end street. We knew,” Robinson says about Brittany and Yazan’s relationship. “You’re going to see the confrontation between Brittany, Yazan and his family. His family goes after Brittany, it is so explosive. But let me tell you something, Brittany is holding her own, OK? She’s got some receipts that she said she is going to show and she does show them, so it’s wild. It’s so wild.”

Another interview Robinson is excited for viewers to see is an interview with a producer who knows all the behind-the-scenes information when it comes to fellow 90 Day Fiancé: The Other Way season 2 stars Jenny and Sumit’s family drama.

“I cannot wait for you to find out more about Jenny and Sumit,” Robinson excitedly says. “Remember when Sumit’s family came to their home and told Jenny that Sumit was still married? We have a producer who arrived there 24 hours later and what he found out that happened that we did not air on regular TV, he will be discussing right here on our Bares All stage. I’ve been wondering about, you know, wait a minute, what was going on there? Well, you’ll find out here. … He knows the behind-the-scenes details. He knows more about Sumit’s family and what happened between them and Jenny … It is so much worse [than what you saw on TV] and now I know why we could not show it on regular TV, but here we can show it.”

As for the gorgeous set of the show, it features a swanky fireplace, a comfy sitting area where Robinson can talk to guests both in person and virtually, and also a space for performances. The set also has a bar.

“Drinks will be flowing. We’ll have some specialty drinks here and we’ll give them to our couples and have them loosen a bit,” she jokes. 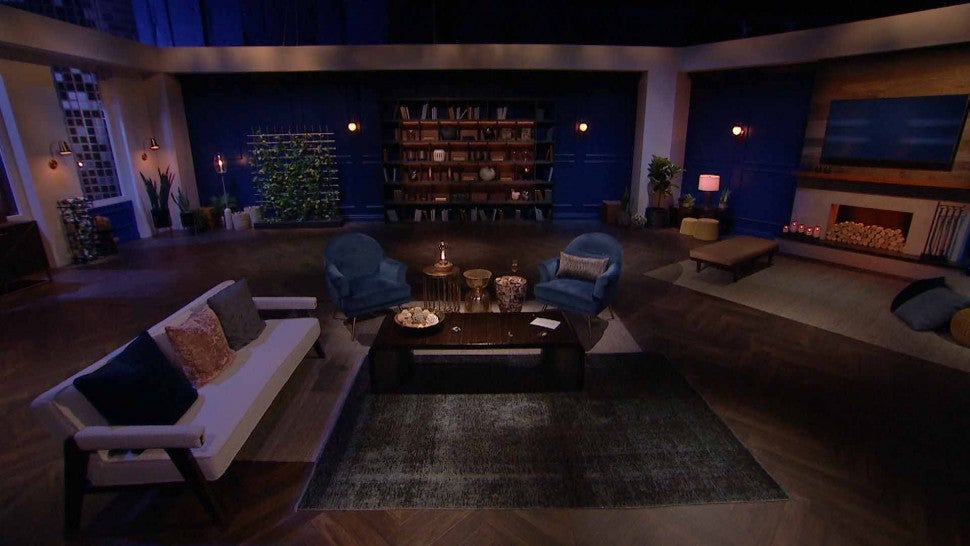 Season 8 of the original 90 Day Fiancé series that started it all premieres Sunday, Dec. 6 at 8 p.m. ET/PT on TLC and 90 Day Bares All starts streaming Jan. 4 on Discovery Plus.