We’re going to learn a lot more about Marjan on Monday’s episode of 9-1-1: Lone Star. Once a viral sensation, thanks to several eye-popping rescue videos that made the rounds on social media, the first responder is forced to confront her past when an old flame (and secret fiancé via a childhood arrangement), Salim(played by Aladdin‘s Mena Massoud), comes into town to catch up on lost time — and address their romantic future.

“You’re going to find out a bit more about Marjan’s backstory, a bit more of her culture, her own life back home in Miami, which she left to come here to Austin. Basically, it’s starting to catch up with her because she cut the ties really quick and she’s having to face herself and she’s forced to think about some things, which she’d been avoiding thinking about,” actress Natacha Karam, who plays the adrenaline junkie, told ET.

Though her fellow cohorts at the 126 express surprise over her previously arranged engagement, there’s a reason she kept it hidden from her work family — and it has nothing to do with shame. “She’s not ashamed of herself, her religion, her culture or her choices at all. I think it’s the case of, it was something she had been ignoring herself. Something she wasn’t ready to face because she isn’t ready to be all that grown-up yet or to end the chapter that she’s currently in,” the actress explained. “So she’d been putting it off, and he shows up, and she doesn’t really have a choice but to face it. To have conversations and to think and to feel and to be vulnerable. When I read the script, I was like, ‘This is going to be quite something.'”

When it came time to cast Salim, Karam — who’s been friends with Massoud for years — thought of him immediately. It just so happened that producers were also eyeing him for the role.

“Someone was like, ‘We would love, but it probably won’t happen, to get Mena Massoud,'” she recalled. “I was like, “Oh, he’s my friend! We’ve known each other for years. Let me see what I can do.’ I talked to Mena and he was super excited about the director, Sanaa Hamri, of the episode and he really wanted to work with her. He really wanted to work with me because it’d be fun. A nice little moment for us to be like, ‘Look how far we’ve come.'”

“I met him before Aladdin and he met me before I’d ever been on a TV show as more than a guest star. We’d often be on set laughing and being like, ‘How much has changed? And also, how much hasn’t at the same time?'” Karam shared. “Having that much Arab energy on set was really cool because our director was Moroccan and we had a lot of fun. As soon as he agreed to sign on and do it, I was really excited. Because we do know each other, you don’t have to try and find that history. We were quite comfortable with each other. We’d never done any acting together, so that was fun.” 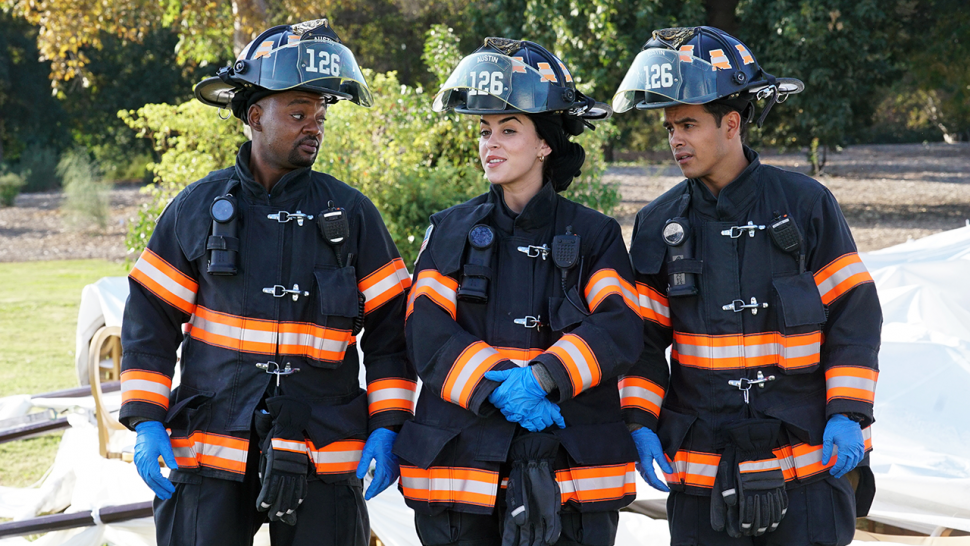 As one can imagine, things get complicated fast when Marjan and Salim confront their past and their very different desires for what they hope their future to be.

“Every single person is on a different journey; every human being on this Earth. And within your culture, within your self-culture, within your religion, within everything, even if you’re under the same umbrella, you’re on your own journey. We may be from the same culture, we may believe in a lot of the same things, but there will always be what the individual brings to the table,” Karam said. “This is the story of two specific individuals having their individual journeys and things happen. People have differences of opinions, differences of priorities and it doesn’t make anyone better or worse or more right or more wrong. Matters of the human heart are complicated, and it gets complicated.”

Watch an exclusive clip from Monday’s episode, featuring Marjan and Salim as they catch up over dinner.

Exploring Marjan’s little-known history and Muslim culture through her complex love story with Salim was an opportunity to showcase another culture little seen on mainstream television.

“It really excites me to expose people to different cultures. The thing that everyone needs to be reminded of is that it doesn’t summarize the whole culture. It’s not every Muslim is involved in arranged marriages because there are a lot of other religions that do arranged marriages too. And there are a lot of people who are in that religion who don’t do arranged marriages,” Karam said. “It was a really interesting way to show that and to show it in a way that highlights two different people’s experiences of the same thing and humanizes the whole thing. It had depth. I think it really matters to have that depth and to not just be floating around in archetypes and stereotypes.”

What Salim’s reappearance in Marjan’s life does accelerate is her reassessment of her life’s priorities, including what she wants romantically.

“It really puts her inside herself instead of outside of herself. She has to go in and face herself, and reassess things and really feel things and be present and be in that analytical headspace,” Karam said. “It’s funny because I feel like a lot of us have been in that space because of COVID. How little outside noise there has been that a lot of people have been going inward recently and really reconnecting with themselves, and learning things about themselves. It’s that kind of journey for Marjan; ‘I may have gotten a little swept up in all of my life out here, but I’m not focusing on what goes on inside me and my life outside of being a firefighter, outside of Austin, back in Miami, back where my family is, back where my heart and my roots are.’ A lot of inward reflection for Marjan and it’s a transitional time for her.”

Following the recent 9-1-1 and 9-1-1: Lone Star crossover, Karam hopes there’s more connectivity between the Los Angeles and Austin crews now that they’ve been in each other’s worlds.

“I can imagine her and Buck now follow each other [on Instagram], but she knows she has the upper hand. And Marjan’s kind of cheeky so she’s the kind of person who would leave comments on his photos making fun of him,” she quipped. “Seeds have been planted [between the two squads], and that will be really interesting to see where things go because I would love them to grow into things. I would really, really like to do some scenes with Hen [played by Aisha Hinds in 9-1-1], she’s my favorite. It would be nice to see Marjan in relationship to other women. We see a lot of her around the guys, but it’d be nice to learn what happens when she’s in a softer space.”