Home » TV and Movies » 50,000-Plus People Want Jeff Bezos to Go to Space and Never Come Back

“Billionaires should not exist on earth, or in space,” a Change.org petition reads 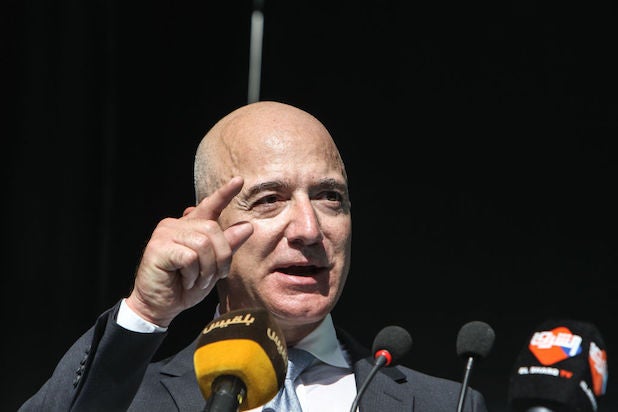 Amazon founder and CEO Jeff Bezos is set to embark on a brief journey into outer space in one month but an online petition that’s racking up thousands of signatures requests that the world’s richest man be kept floating in space instead of allowed back to Earth.

More than 50,000 people worldwide — yes, you read that right — have signed a petition created on activism platform Change.org titled, “Do not allow Jeff Bezos to return to Earth.” While Change.org encourages people to write deep descriptions of their petitions, this one is just one concise sentence: “Billionaires should not exist… on earth, or in space, but should they decide the latter they should stay there.”

The petition was created by a guy who goes by the username Ric G., who made it a couple weeks ago on behalf of “The Proletariat.” It doesn’t appear to be affiliated with any particular group; just one guy who’d rather see Bezos stuck in outer space and made to try dominating another planet’s economy.

Bezos is the CEO of Amazon, but not for long — he will step down from his post July 5 to focus more on his aerospace venture Blue Origin. The billionaire planning to go to space for roughly 11 minutes July 20. He’ll go alongside his brother and one other space tourist in the first crewed mission by Blue Origin. The capsule and rocket the group will take off on is called the New Shepherd and current bids for the third seat on the mission are topping $2.8 million.

We reached out to Amazon and Bezos on this, and to see if this might at all make him consider actually living on another planet like his fellow billionaire tech entrepreneur Elon Musk, but Amazon didn’t immediately respond to requests for comment.

One of the best parts about Change.org petitions is they allow the person signing it to leave comment when they support. The only issue is there’s no profanity filter, so we went ahead and made a couple of the more obscene messages SFW, like this cheeky one below.

Some of the statements on this petition are true comedic gems… like this person who argued that if you go into space you’re not necessarily guaranteed entry back home:“Being let back into Earth is a privilege— not a right. If he wants back in he’s gotta work for it,” they said. 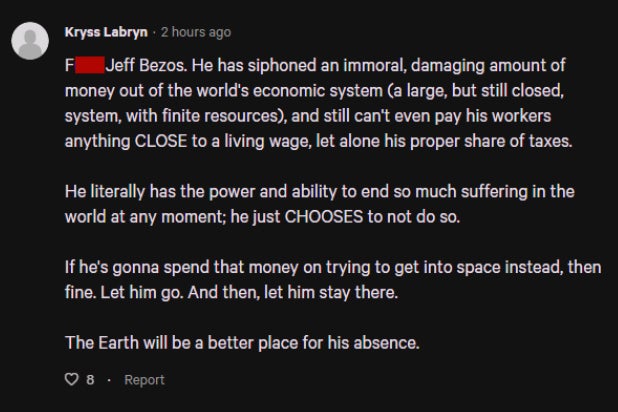 “Any man who allows his workers to pee in bottles does not deserve to live on this earth,” a petition signee named Mbone Elango noted, referencing Amazon’s recent apology for denying reports that some of its delivery drivers aren’t given proper breaks and forced to urinate in plastic bottles while working deliveries.

One signee named David Bond who wondered if Bezos would just try to colonize space if given the chance.

“I cannot imagine a more despicable person. I also feel like him having all of outer space to himself would be his dream come true. Aren’t there loads of alien species he could subjugate, now that he’s done doing that to us?” Bond questioned.

One signee named Lynda Dods questioned why we can’t just send every billionaire into space, if Jeff figured it out.

“If they can send a billionaire to Mars why can’t they send them all there,” Dods said.

Other people argued that exiling Bezos to space would be payback for his company’s poor treatment of its workers. “Stay in space or treat your workers with dignity,” a signee named Alexandria Bagwell wrote, after noting that Amazon’s profits skyrocketed during the pandemic.

Take a look at the petition here, and stay tuned for more news on Bezos’ interstellar journey later next month.