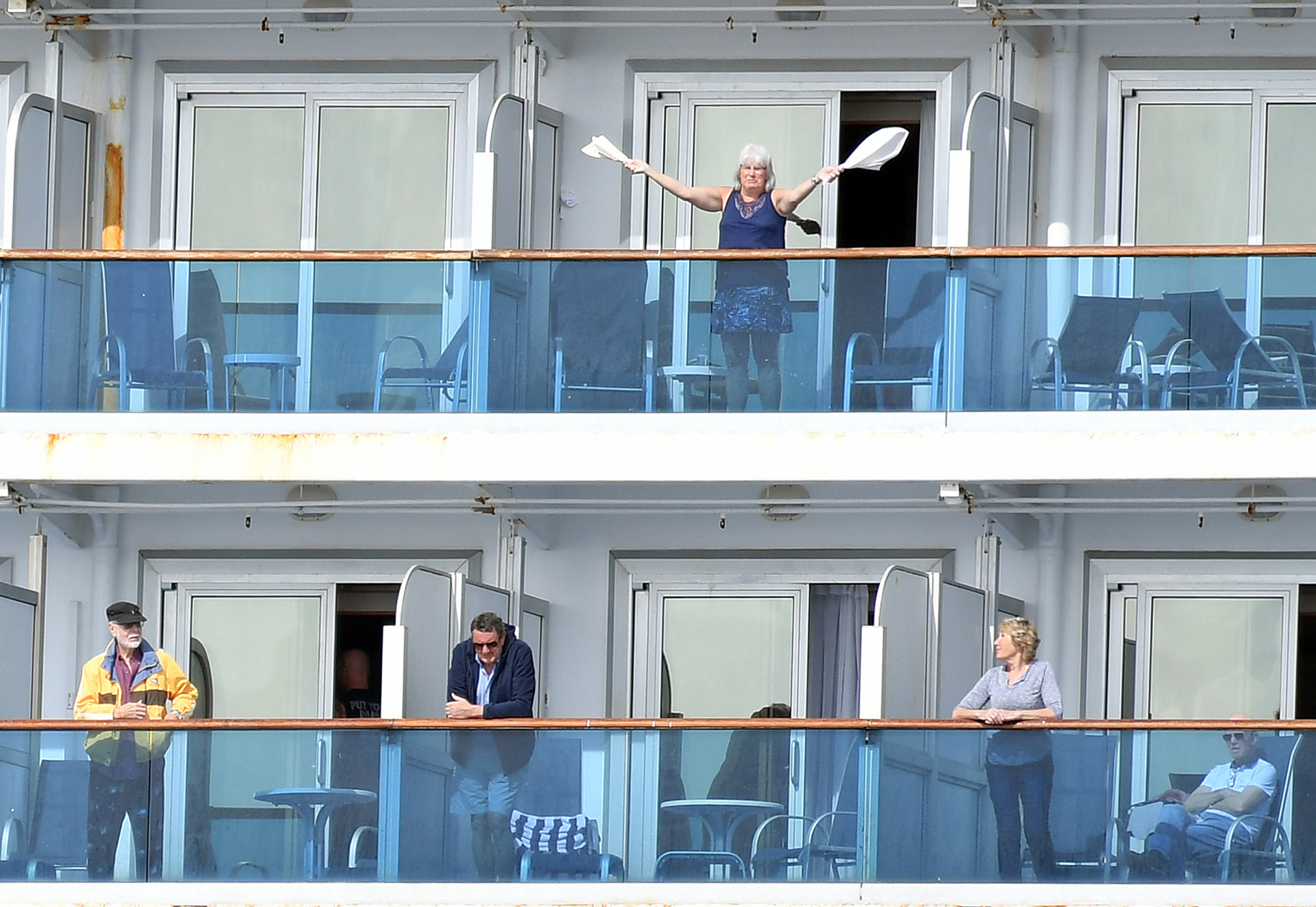 A woman gestures as other people look on from aboard the Grand Princess cruise ship, operated by Princess Cruises, as it maintains a holding pattern about 25 miles off the coast of San Francisco, California on March 8, 2020.

It’s a scary time to be away from home, especially if government lockdowns have made it impossible for you or loved ones to get there. Cruise ships aren’t able to dock, governments are struggling to bring their citizens home from overseas, and people are worried about their older loved ones stranded abroad who may not have access to essential items like their medicine.

As we’ve seen play out on every Sister Wives episode this season, Kody Brown wants all his spouses to live under the same roof.

The spouses all hate this idea and construction hasn’t even started on Kody’s dream mansion in Flagstaff yet, which means the women remain spread out at the moment, living on their own and only spending time with Kody on occasion.

At least… that used to be the case.

The United States, as you must know by now, is basically on total lock-down.

Those who are listening to the health experts are rightfully keeping their distance from anyone outside their immediate family —  but this raises an interesting question for a unique family such as the Browns.

Who, exactly, is living with whom?

To be more precise: Who, exactly, is stuck inside all day and night with Kody Brown, who has come across this season like more of a selfish jerk than ever before?

Could it be Meri?

Via social media posts, this often-unhappy Sister Wife has said she was actually scheduled to go on a cruise this month… until the trip was justifiably canceled.

Since then, Meri has posted several photos of herself out in nature or at home with her dog.

We’ve seen nothing on Instagram to indicate she’s spending any time with Kody at all.

Could it be Christine?

Her latest Instagram photo features her at home witha bunch of kids, everyone trying to kill time by trying on some facials.

We don’t see Kody anywhere in the following group snapshot, do you?

Could it be Janelle?

She shared photos this week of a giant snowstorm outside her window, and she also gave props to a local movie theater that is closed… yet is offering folks some of its delicious popcorn.

There are no photos of Kody.

And no mentions of Kody.

Could it be Robyn?

A-ha! We may have a winner!

Kody’s fourth wife has only really shared her thoughts on the Coronavirus pandemic by sharing a link to a TLC-sponsored video that says, in part:

From our family to yours, we wish you love, hope, and a little TLC. #StayHome.

Our best guess is that Robyn is holed up with Robyn, and will be for the foreseeable future.

And based on what she recently said about her relationship with Kody?

There are times every day when Julia Gagliardi can’t help it: She is filled with the kind of optimism that is supposed to fill the hearts of 17-year-old high school seniors. These, after all, are the best of all days: graduation around the corner, prom, the parties that fill weekends until everyone heads off to college.

And softball, of course.

“Since I was 9 years old,” she says. “It’s something I’ve looked forward to. In the gym at school, there are banners for all the champions of all our sports — league, county, section, state. This is my senior year. I’ve wanted to be able to put a “20” on some of those banners, for our team for an awfully long time.”

There are times every day when Julia Gagliardi can’t help it. She is filled with dread, with anxiety, with sadness over what’s already been lost and what the next few weeks and months might bring. These, after all, are apprehensive days for high school seniors: events already canceled, events postponed, uncertainty everywhere.

“It has been eating away at me, because I want this season so badly,” she says, not long after finishing her daily virtual-class load at Westfield High School in Union County, N.J. “Me and all my teammates. This was going to be our year.”

This is the melancholy mood slowly marinating in the hearts of so many of the 17- and 18-year-olds in our midst, all over New Jersey and New York and Connecticut, all across a nation in which COVID-19 has emptied classrooms and playing fields and gymnasiums and swimming pools.

There are school plays and glee-club recitals and debate tournaments that will never be held. Most winter sports were amputated just shy of state tournaments. Now it is the warm-weather athletes’ turns: the baseball and softball players, the tennis players and golfers, the lacrosse players and middle-distance runners and high jumpers and javelin throwers.

It hurts all of them, regardless of class, to be stuck at home, completing their lessons on laptops, confined to the backyard, limited to interacting with their classmates on FaceTime or Zoom. College athletes feel the same. There are an entire batch of Olympic athletes who’ve waited their whole lives to compete in the Tokyo Games that now won’t be contested until 2021, if they’re held at all. High school underclassmen feel it plenty.

But there is something different about the high school senior. The college players have had plenty of moments in the athletic sun. The younger athletes have the hope of tomorrow, and next year. But you’re only a high school senior once. You don the cap and gown once, the tux or gown for the prom once.

You only get one softball senior season. Julia Gagliardi, and her fellow members of Classes of 2020 everywhere, have waited patiently for their turn. Julia, for one, is a catcher, but for the past two years she played behind a teammate good enough to play college ball.

She played where she was asked, but she always knew she would get one year as a starting catcher, and that was that. She’s bound for Loyola Maryland in Baltimore, but the Greyhounds don’t field a varsity softball team. Maybe she’ll play club. Regardless, it won’t be the same as this. Westfield was supposed to open its season April 1 against Roselle Park. But spring sports in New Jersey have been shut down until at least April 5.

“The best word is surreal,” Julia says. “This all didn’t really hit me until last Tuesday, which was the first day we had classes from home. All of a sudden, my classmates and I were like: Is this it? Will we be able to go to the beach after prom? Will there even be a prom? Graduation? And softball …”

Her voice gets softer here.

“Look, I’m the captain. I figured if we can’t have actual practices I can organize things, we can get together to throw, or to hit. And then they started closing down all the parks. And then …”

Her optimistic side usually carries the day, mostly because it has to. Because, without hope what is there? There is hope among parents that something of the season can be salvaged, even if it’s just a handful of games.

“Even if we have to sanitize the softballs,” Julia’s father, Mike, says. “Even if the parents can’t go to the games.”

Says Rebecca Antonelli, Julia’s coach: “I try to put myself in their shoes when I was a senior in high school and I just can’t imagine how I would handle it. But it’s important for all of us to stay positive. We need to worry about their health and safety first, of course. But we want so much more for them.”

All Julia Gagliardi and the rest of the Westfield Blue Devils want for themselves is a slice of normalcy to return to their senior year, no matter how abbreviated. They need to fete the prom king and queen, need to listen to the class valedictorian and salutatorian speak of their limitless future. They need a shot to add that “20” to one of the banners.

They need hope. All of our seniors do. In the absence of anything else to root for, that’s not a terrible one to embrace.