Those magnificent men in their writing machines! As the daredevil art returns after a long ban, JANE FRYER reveals the heroic history trailing behind it…

For over a year, Royal Air Force Captain Cyril Turner practised in his modified Royal Aircraft Factory S.E.5a fighter: looping, climbing and flipping, two miles up in the sky.

First, he perfected the straight stroke of the letter ‘D’. Then, the swirl of the ‘Y’. Next, he tried grouping the letters ‘ail’ and ‘ily’.

He could only see the previous letter, or part of it, from the cockpit, so it was hard to write in a straight line, almost impossible to separate words, and the ‘Y’ was particularly tricky to pull off when flying at 100mph.

Oh yes, and it was all written backwards.

Which is why, as he told the Daily Mail at the time, he used the sun as his guide.

‘I fly directly towards it when I make the straight stroke of the ‘D,’ ‘ he said. 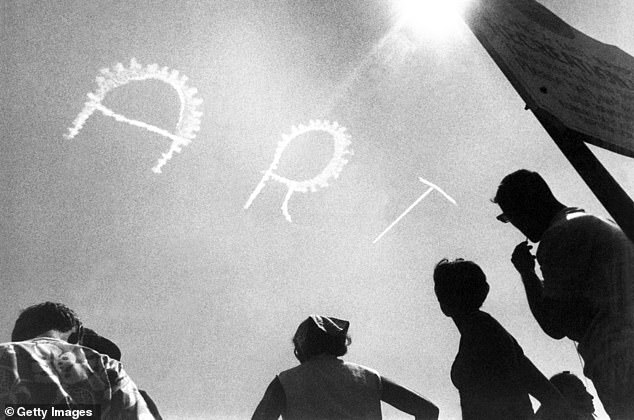 Skywriting is the process of releasing smoke via a small aircraft during flight to form letters in the sky. Pictured: Skywriting in East Hampton, New York, in the 1940s 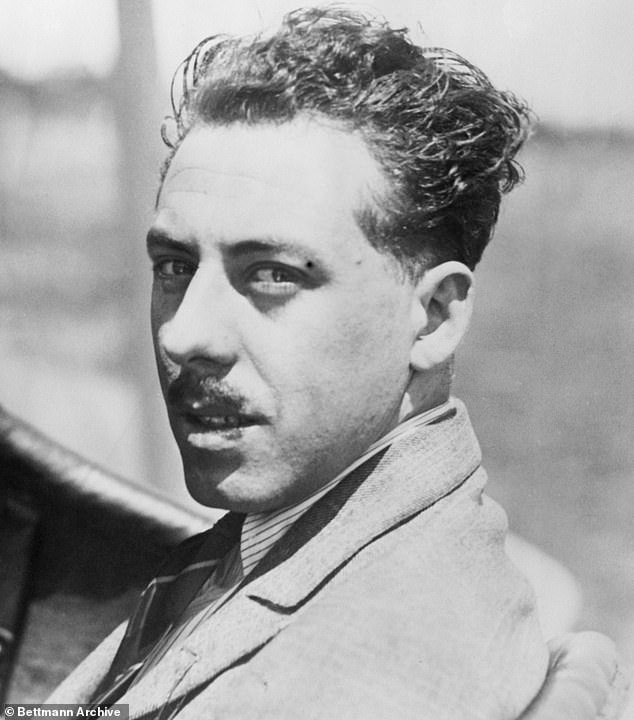 ‘I am too busy concentrating on the correct tracing of the letters to trouble much about the actual flying of the machine. I don’t bank correctly always, for example.

In making the ‘D’, I kick the rudder hard and so turn more sharply than I would do if I made a correct bank. This improves the appearance of the letter.’

But, eventually, after thousands of hours of practice, he mastered it and, one blue-skied day in May 1922, tried out his new skill above London and the south coast, trailing a ten-mile plume of smoke behind him.

The crowds beneath were entranced.

‘A thousand fingers pointed to the sky where, gleaming white against the soft blue heaven, an aeroplane was seen wreathing in its flight a silver curl of smoke,’ recalled one witness.

In Margate, residents and holiday-makers rushed outside to join the crowds. Bathers looking upwards collided with each other in the water, boatmen stopped rowing and taxi drivers stopped their engines.

In Southend, the whole eight miles of seafront were crowded with thousands of visitors, and all eyes were turned skyward to see the wonderful writing.

‘The impression it left was one of amazement, for nothing could be seen in the sky but the letters traced in smoke,’ said one onlooker. ‘The most successful free exhibition,’ cried another.

Captain Turner was poised to become the first pilot to bring commercial messages to the skies.

Days later, he produced his first official airborne advertisement — two words in vast, silvery letters in the blue skies above the thousands of ecstatic race-goers at the Epsom Derby: ‘Daily Mail!’ 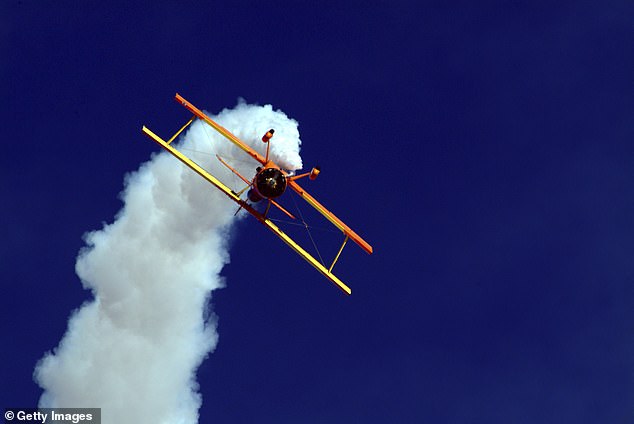 The art originated in the skies above the Western Front when British airmen used paraffin oil to create smoke trails. (Stock image) 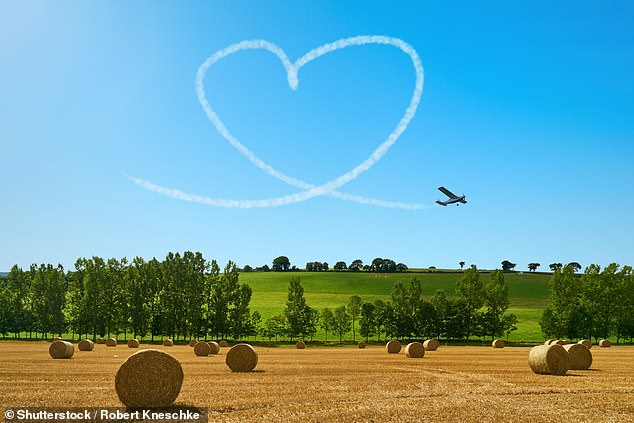 The ‘ink’ used in skywriting is a mixture of light paraffin oil and water which, when pumped into the plane’s exhaust, heats up and turns into a smoky vapour. (Stock image)

There has always been something magical about skywriting — words created in the sky by agile and talented pilots who, somehow, while flying at high speeds, mirror-write messages in the sky.

Letters that hang, swirling and shimmering in the breeze, before vanishing into thin air.

So what a perk, at an otherwise grim time to learn that, after a six-decade ban, skywriting is now set to make an unexpected return to British skies.

Even better, it could help our increasingly beleaguered aviation and advertising industries.

Proposals have been published by the Department for Transport (DfT) to amend aviation regulations to reintroduce it for advertising purposes, state events, airshows, birthday celebrations and marriage proposals.

The result could generate about £4 million a year in revenue but, more importantly, Britain would finally be back in step with much of the world for a skill we invented.

It would also allow our pilots —some of the best skywriters in the world — to work here, not America, China and Australia. (Just last week, one skywriter wrote ‘WASH HANDS’ in 600-metre letters high in the Sydney sky.)

Skywriting originated in the skies above the Western Front where British airmen used paraffin oil to create smoke trails, which they used to signal to the troops below. 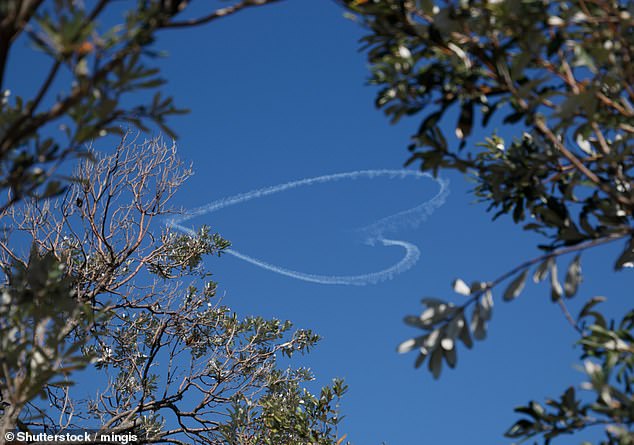 There are environmental worries over skywriting which include increased CO2 emissions and the risk of abusive or inappropriate messages. (Stock image)

But it was our very own RAF airmen, Captain Turner and Major Jack Savage who, in the post-war years, turned it into a lucrative commercial enterprise.

After all that inaugural Daily Mail excitement, they took the business to New York where Turner scrawled a huge ‘Hello USA’ in the skies above the city and sparked an entire industry.

The next day, he wrote ‘CALL VANDERBILT 7200,’ the telephone number of the hotel where he was staying. Legend has it that, over the following two-and-half hours, the hotel’s operators fielded 47,000 phone calls.

Within 10 years, skywriting was the biggest thing in advertising, far cheaper than radio and used to sell everything from cigarettes to Pepsi, and send love messages from wealthy suitors.

Soon, the mere sound of a low-flying aeroplane would see city-dwellers rush to the window to see what message it carried.

By 1940, it was one of Pepsi-Cola’s major advertising methods — that year alone, the company commissioned 2,225 flights. The same year, during the Roosevelt-Willkie presidential race, New Yorkers were messaged, ‘no third term’.

During World War II, the Germans even used skywriting to spell out surrender appeals above Soviet and, later, Yugoslav troops.

In 1969, during the Vietnam War, Yoko Ono and John Lennon commissioned a skywriter to create a message over New York City: ‘War is over if you want it — happy Christmas from John and Yoko.’

But while it thrived elsewhere, skywriting has been banned by our government since 1960.

In part, for health and safety reasons, but more as a pre-emptive response to the possibility it could have been used to spread communist propaganda at the height of the Cold War.

Happily, neither concern still applies, and thanks to lobbying by transport minister Grant Shapps (himself a pilot), an end to our antiquated ban looks in sight.

We just need a few incredibly talented pilots who also happen to be decent spellers.

Nearly a century after Captain Turner was looping and banking, the skill needed is still extraordinary, and the process is similar.

The ‘ink’ is a mixture of light paraffin oil and water which, when pumped into the plane’s exhaust, heats up and turns into a smoky vapour, hanging in the air between 7,000 and 14,000 feet up.

Skytyping — where planes flying abreast puff smoke at intervals to form letters — is different. And neither should be confused with banners, which are trailed behind light aircraft.

Naturally, leaving a message, however temporary, in the sky is very expensive. Compared to the £500 or so it costs to hire a plane to pull a banner, it costs thousands for letters that last barely four minutes, if you’re lucky.

(Though they won’t get tangled in your propeller and nearly kill you, as happened to poor old Nigel Farage when his UKIP banner brought his plane down on the day of the 2010 General Election.)

Success — crispness and legibility of letter and duration of display — is subject to the vagaries of the British weather. Optimum conditions are calm, blue skies. Too much wind and all those carefully flown letters blow away.

There are also environmental worries, which include increased CO2 emissions, safety concerns and the risk of abusive or inappropriate messages. After all, once a message is 2.5 miles up in the sky, it is there for all to see.

Indeed, while plenty of romantics have proposed or declared their love with heart-warming messages, not everyone has embraced skywriting’s celebratory side.

When his wife ran off with someone else, millionaire John Everson paid a pilot to skywrite ‘Cindy Everson is a sex cheat’ in the blue skies above Houston, Texas.

In a similar vein, Dirk Delahune, of Chicago, paid for ‘Marla Delahune is a tramp’ to be trailed across the skies after he caught her in bed with her tennis coach.

Which, as well as humiliating poor Marla, must have been rather eye-catching for everyone looking up in Chicago that day.

But the DfT seems to have all that covered.

‘Offensive or otherwise illegal content could be subject to general criminal law,’ it writes in its online consultation document.

Even better, the environmental concerns are negligible. Partly because smoke used to create the messages is a refined, non-toxic, and inherently bio-degradable white mineral oil, but also because the planes used have minimal impact on the environment.

So hurrah! Finally, some good news that would surely have sent the late Captain Cyril Turner looping the loop, and will hopefully cheer the rest of us up a bit, too.

Even if, for the foreseeable future, rather than ‘Karen, I love you’ and ‘Bobby, will you marry me?’ our messages are more likely to say: ‘Wash your hands!’ and ‘Has anyone got any loo roll?’