For the special evening, all of our favorite celebrities showed out in the fashion department, too (of course). Megan Thee Stallion, for example, wore a Jean Paul Gaultier white gown, which included side slits and hip chains (via CNN). Lil Nas X, meanwhile, went for a gender-fluid look consisting of two outfits — the first was a structured floral-printed suit, while the second was an oversized dress paired with a corset and suspenders.

Zendaya didn’t miss either. For the 2021 BET Awards, the “Euphoria” star decided to dig into the fashion archives, picking a dress that paid homage to one of the biggest performers ever: Beyoncé. Find out more about Zendaya’s stunning dress below. 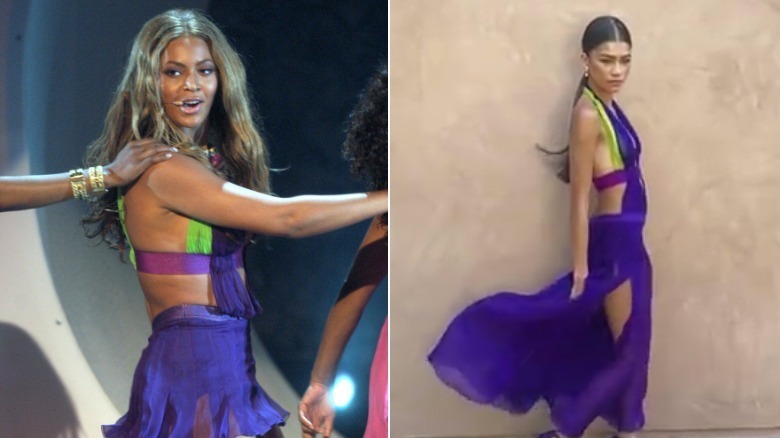 As fans will remember, Beyoncé wore a multicolor Versace mini dress during a live rendition of “Crazy in Love” at the 2003 BET Awards, which also marked her first solo performance at the award show. Beyoncé’s original dress came with a pleated mini skirt, while Zendaya opted for a longer maxi-skirt version featuring a side slit.

The night of June 27, Zendaya also took to Instagram to pay homage to her idol, while flaunting the aforementioned dress. “Crazy in love,” she wrote in the caption. “Full choreo in the backyard,” she wrote in a later post. And, according to all the social media reactions, Zendaya understood the assignment.

“Zendaya is so hard for the crazy in love inspired dress. Best dressed for me,” one fan tweeted. “That Beyoncé tribute that Zendaya did with her dress for the #BETAwards is PERFECT,” another one noted. We can only agree!