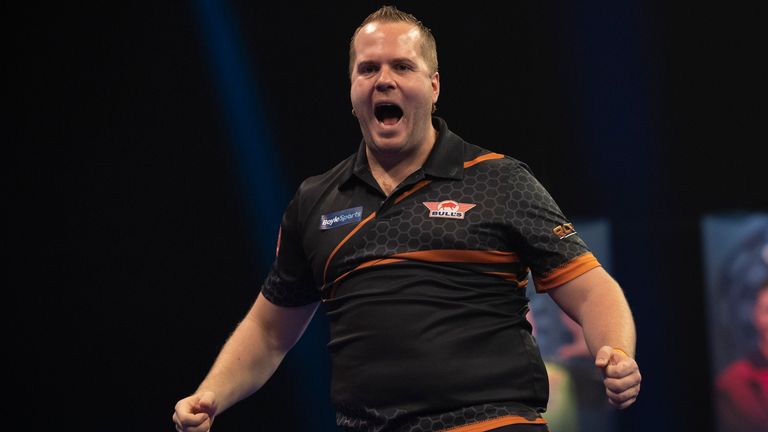 Dirk van Duijvenbode beat Simon Whitlock to continue his fairytale run at the World Grand Prix where he will meet Gerwyn Price in Monday night’s final.

The 28-year-old Dutchman, who still works as an aubergine farmer after battling to secure his Tour card for the second time in January, produced a remarkable display on the biggest stage of his darting career to send multiple major finalist Whitlock packing.

Just a couple of months on from debutant Dimitri van den Bergh winning the World Matchplay, Van Duijvenbode is on course for the same having started the tournament as a 250/1 outsider and the lowest-ranked player in the field.

Standing opposite him is Price – the most in form-player in world darts and the only seed left in a tournament that has seen shock after shock since getting underway last Tuesday. The Iceman has won three of the last four tournaments played and beat two-time runner-up Dave Chisnall in a thrilling clash to seal his spot in the Monday night showpiece.

Dirk van Duijvenbode remains on course for one of the most unlikely title triumphs in darts after a convincing 4-1 victory over former World Championship finalist Simon Whitlock saw him become the first debutant to reach the final of the double-to-start event. 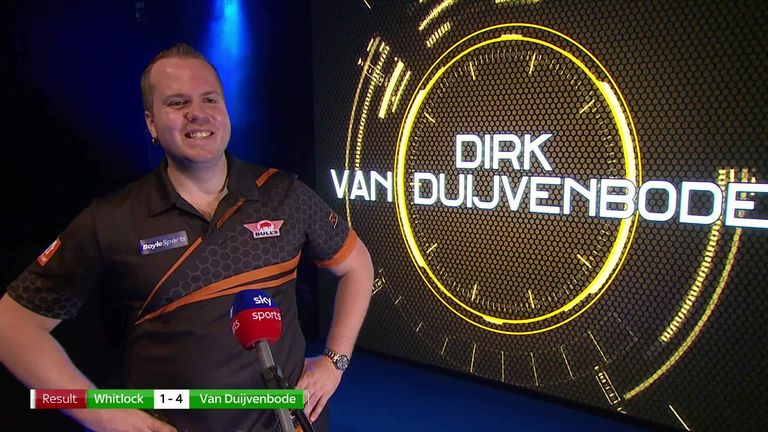 The Dutchman piled in 10 maximum 180s in a nerveless display against an out-of-sorts Whitlock whose run is over after being added to the field as a late replacement once Adrian Lewis had tested positive for coronavirus.

Van Gerwen had been remarkable in beating world No 1 Michael van Gerwen on Saturday night but from the off, Van Duijvenbode was the more accomplished player, a two-dart combination gave him the opening leg as he swept into the lead. 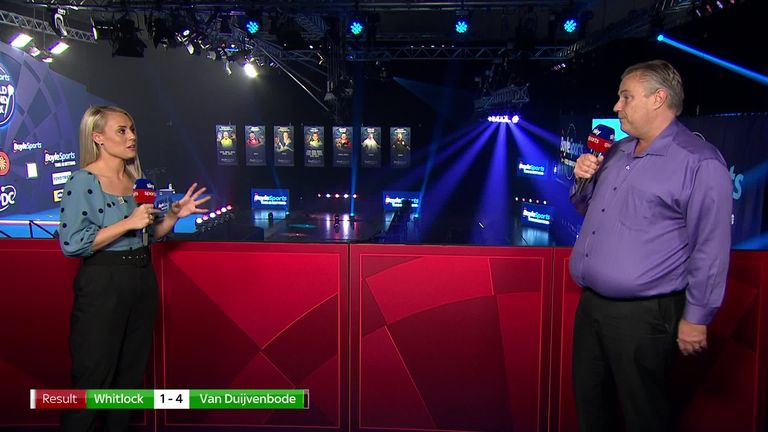 Having missed just two darts at double in the opener, the Titan missed three for the first leg to allow Whitlock into the game and perhaps showing his experience, as well trying to find his own game, he slowed the pace to level the match.

But the Wizard was unable to get going and Van Duijvenbode swept the third set which he kicked off with a brilliant 10-dart leg before oozing confidence down the stretch. He lost just one more leg as he upped his average for the fourth and fifth sets to the 100 mark and continued to pepper the treble 20. 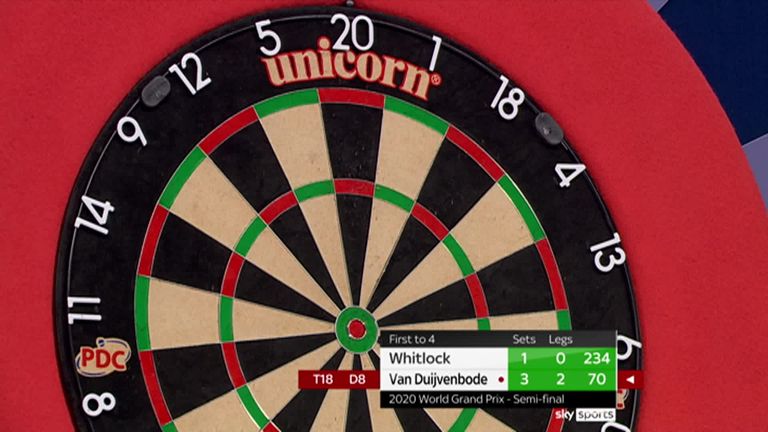 Fittingly he wrapped up a stellar display with a classy 12-dart leg to add Whitlock to a list that had already included Mensur Suljovic, Van den Bergh and Gary Anderson and ensures the biggest payday of his career keeps getting higher.

Before this week Gerwyn Price had never been beyond the quarter-final at the World Grand Prix but a thrilling 4-3 victory over last year’s runner-up Dave Chisnall underlined his status as the most in-form player in the game. 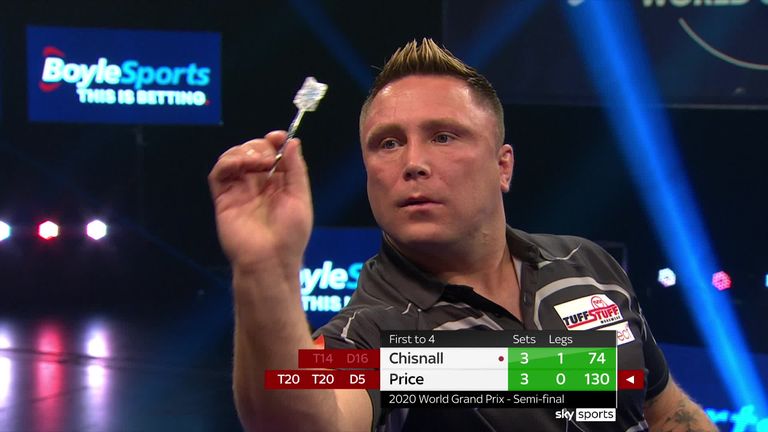 The Welshman, who can rise to second in the world rankings if he claims the title on Monday, had to dig deep in an enthralling contest that featured seven 100+ finishes, 17 180s, and both men averaging more than 92 as well as three missed match darts from Chizzy, who had fought back from two sets down for the third game in succession.

Price won a high-class opening set that went the distance and set the tone for the match. Four of the five legs were won in 15 legs or fewer with the Iceman edging things thanks to a 13-darter.

Having taken 22 darts to win the opening leg of the second set, Chisnall needed just 28 more to claim the next two and restore parity in the contest before moving into the lead for the first time with a sizzling 130 finish.

Price hit back to lead 2-1 before a third three-figure finish of the match from Chizzy took the third of the four sets to be played the distance, but it was the Iceman who stood firm with a 13-dart leg to lead 3-1 and stand within one set of a place in the final. 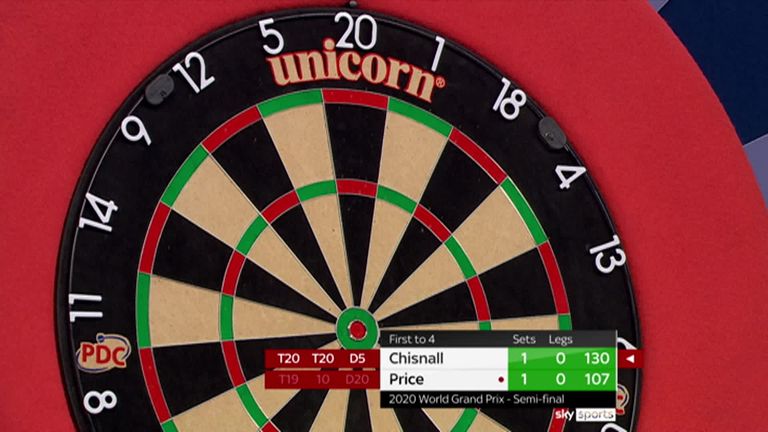 But Chisnall, who trailed by two sets against Ryan Joyce and Joe Cullen, was not done. He averaged 101 to claim three of the next four legs and a fifth set that halved the deficit. Chizzy pinned a brilliant 104 finish to seize the advantage in the sixth set and when Price’s doubling began to falter, Chisnall levelled the match.

A thrilling contest still had time for its remarkable conclusion, the seventh set fittingly going the distance, but Chisnall finally ran out of luck. He missed three darts for the match and Price stepped in to seal the win with a pair of doubles to mop up 56.

Darts is back on Sky Sports on Thursday night with the thrilling conclusion of the Premier League Play-Offs, while the big tournaments continue in November with both the World Cup of Darts and Grand Slam of Darts